The latest news on the 2020 presidential election
Democratic Debate

Through a year of campaigning, the Democratic presidential candidates played nice, talking up party unity, disagreeing mostly politely on policy.

Wednesday’s debate signaled a sharp turn in the Democratic contest, with civility giving way to a combustible conflict that laid bare both the ideological divisions roiling the party and the personal animosities that have simmered for months.

Elizabeth Warren criticized Bernie Sanders for leading a movement that has provided a haven for online harassment. Amy Klobuchar accused Pete Buttigieg of calling her dumb. And all the candidates piled on first-time debate participant Mike Bloomberg, launching aggressive attacks on his record on race, gender and how he is wielding his vast personal wealth in pursuit of the Democratic nomination.

For many of the candidates, it was a strategy shift born of urgency and necessity. Though just two states have voted thus far, time is running out for some contenders, including former Vice President Joe Biden, to prove they still have a viable path to the nomination as the contest hurtles toward larger, more diverse states.

But the bareknuckle politicking also carries risks for a party that is desperate to rally around a standard-bearer to take on President Donald Trump in November. Democratic voters have warned for months against intraparty conflict, fearful of damaging their eventual nominee in the general election.

After the debate, Trump’s campaign spokeswoman Kayleigh McEnany declared: "The Democrat Party is in the midst of a full-scale meltdown."

Senator Amy Klobuchar admitted to the gaffe during the Nevada Democratic Debate, but said forgetting his name doesn’t reflect what she actually knows.

Despite Democrats’ attempts to maintain civility for much of the campaign, Wednesday’s scorching showdown was likely inevitable given how crowded the field remains and how fast the primary calendar is moving. Nevada holds its caucus on Saturday, followed by South Carolina on Feb. 29, and more than a dozen states in the March 3 Super Tuesday contests.

Sanders’ strong showings in the opening contests have left some rivals fearful he could begin to amass an insurmountable lead in March, when delegate-rich states like California and Texas vote. And more moderate candidates who view the Vermont senator — a self-described democratic socialist — as unelectable in November fear Bloomberg’s late entry in the race could further divide up the anti-Sanders vote.

Bloomberg hasn’t appeared on a ballot yet and won’t for two more weeks. Yet he’s quickly stood up a monstrous national campaign, and recent polls suggest he is getting a boost from the $400 million in advertising he is plunging into states that vote on Super Tuesday and beyond.

Wednesday’s debate marked the first opportunity for his rivals to begin puncturing the narrative he is carefully crafting on the airwaves. And they wasted little time in doing so.

Warren, who is urgently trying to salvage her once promising candidacy, was particularly blistering, comparing Bloomberg to another wealthy New Yorker: Trump.

"Democrats take a huge risk if we just substitute one arrogant billionaire for another," Warren said. She also repeatedly put Bloomberg on the defensive over nondisclosure agreements with some female employees at his eponymous media company.

For Warren, the fierce attacks marked a particularly sharp shift in strategy. She’s repeatedly refused to allow herself to get drawn into direct combat with her rivals, but has appeared to get drowned out as a result. She finished a disappointing fourth in the New Hampshire primary, and unless she can rack up wins in the next two weeks, her candidacy is all but certain to end.

Bloomberg stepped on stage prepared for the attacks, which his rivals had been foreshadowing for days. Yet the former mayor and business mogul still appeared caught off guard by the ferocity of the pile-on, and he faltered at times in his defense, including when pressed on his past comments about women. He suggested female employees simply "didn’t like a joke I told."

Senator Elizabeth Warren goes on the offense during the Nevada Democratic debate, criticizing the other candidates' health care plans.

Bloomberg’s campaign offered a tacit acknowledgement of his stumbles.

"It took him just 45 minutes in his first debate in 10 years to get his legs on the stage," said Kevin Sheekey, Bloomberg’s campaign manager. "He was just warming up tonight."

Bloomberg was at his best when tangling with Sanders, a candidate he views as outside the mainstream and unelectable.

"I don’t think there’s any chance of the senator beating President Trump," Bloomberg said. "And if he goes and is the candidate, we will have Donald Trump for another four years. And we can't stand that." 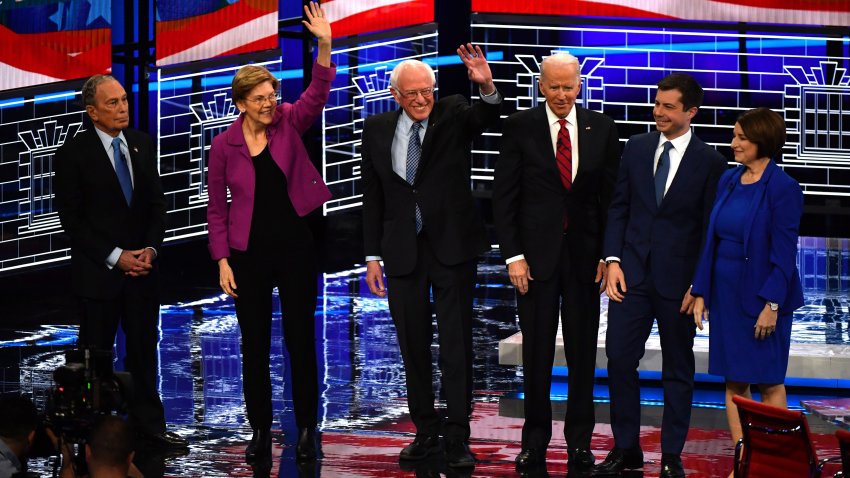 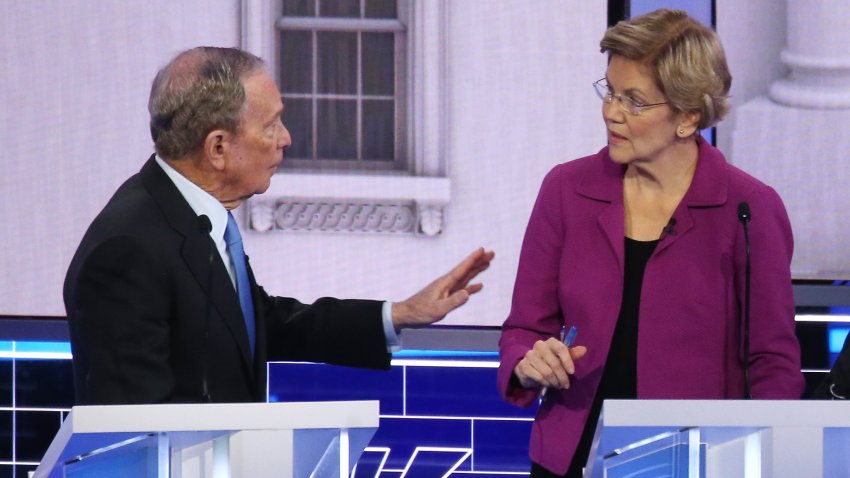 Other candidates also piled on Sanders, accusing him of being too polarizing and too vague about the cost of the sweeping government-run health care policy at the center of his campaign. He beat back the criticisms as he has for months, predicting he could bring new voters into the electorate and use that enthusiasm to bend Washington to his will.

What was unclear at the end of the two-hour contest was how much clarity it provided for Democratic voters still searching for the candidate they believe has the best chance to defeat Trump. And the candidates themselves appeared prepared to fight on for months.

In the debate’s final moments, all but Sanders found one thing to agree on: They are open to bringing the race for the nomination to the Democratic convention in July if no candidate emerges from the voting contests with a majority of the delegates in hand. 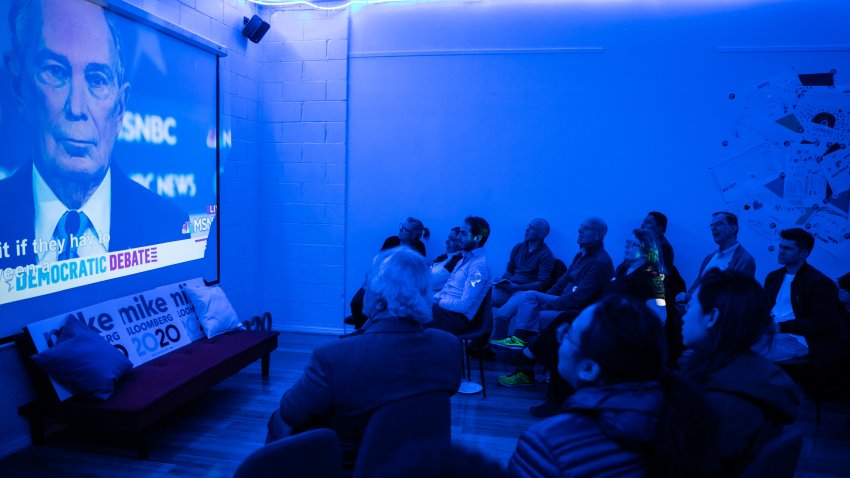