The latest news on the 2020 presidential election
New Hampshire Primary

New Hampshire has been holding the first-in-the-nation presidential primary for 100 years, but a significant number of Tuesday's ballots could be cast by newcomers to that storied tradition.

New Hampshire has one of the nation's lowest percentages of native-born residents, with only a third of those age 25 and older having been born in the state. And one-fifth of the state's potential voters either resided somewhere else four years ago or were not old enough to vote, according to a recent analysis of demographic trends by the University of New Hampshire.

Those shifts challenge some of the presumptions about New Hampshire voters and could affect Tuesday's results, given that surveys suggest the newcomers and young voters are less conservative than the established residents.

Amy Klobuchar hosted a rowdy event at a Manchester bar, making her final push for votes ahead of Tuesday's New Hampshire primary. The Minnesota senator has been buoyed by a string of New Hampshire newspaper endorsements, an infusion of cash and some polls projecting a third-place finish. She says she is sensing something happening for her campaign.

"Many people think of New Hampshire as a place where people have lived for 10 generations and their ancestors signed the Constitution or Declaration of Independence, and, in fact, I know someone like that," said Ken Johnson, senior demographer at the UNH Carsey School of Public Policy. "But New Hampshire is one of the most mobile states in the country."

It's unknown how that churn will shake out on Election Day. But according to University of New Hampshire Survey Center polls, both young residents and recent migrants are less likely to identify themselves as conservative than established residents are. Of the three groups, young residents are the most likely to identify as liberals, but they're also the least likely to have registered to vote. Just 61% have done so, compared to 54% of migrants and 88% of established residents.

Pete Buttigieg took aim at President Donald Trump at his last rally before the first-in-the-nation primary, attracting a big crowd and even some Hollywood support, with actor Kevin Costner urging people to consider voting for Buttigieg on Tuesday.

About 40% of the new residents in recent years came from Massachusetts, and an additional 30% came from other Northeastern states. About a quarter came from Southern or Western states, with the smallest share coming from the Midwest.

That small group included Martha Carlson, 48, who moved to Hollis from Chicago in 2018 and plans to register as a Democrat on Tuesday. Her husband is from Minnesota and likes his home state Sen. Amy Klobuchar, but Carlson said she is about 90% sure she’ll vote for former South Bend, Indiana, Mayor Pete Buttigieg.

Alyssa McKeon and her family moved to Hopkinton in 2018 from Salem, Massachusetts. She said that while she is excited about a number of the Democratic candidates, it was a "no-brainer" to decide to back Warren.

"I’m a planner myself, and I deeply appreciate her comprehensive plans and her approach to how to actually get it done," said McKeon, a 34-year-old registered Democrat who works for an education nonprofit. "I understand it’s going to take drastic changes to how we do business and how we finance things, and I think it’s time for an overhaul."

No estimates are available regarding the racial makeup of the state's new voters, and the state remains far less diverse than the rest of the nation. Overall, minorities made up 8.7% of the adult population in 2018, a statistic to which critics of the primary point in arguing New Hampshire doesn't deserve its starring role in the presidential nominating process.

Sanders' campaign is banking on trying to bring new voters to the polls and has shown a particular strength with young people. Other campaigns have made a concerted push in the state's college towns.

The rally comes as Democrats vying for their party's nomination battle to win over Granite State voters, whose choice carries added weight in this election cycle after confusion reigned in the party's Iowa caucuses, and Trump didn't shy away from the topic.

Ella Diers, who turned 18 in September, said she has been paying fairly close attention to the campaigns.

"I’m kinda leaning toward Pete Buttigieg. I like that he’s not extreme," said Diers, of Concord. "I think he seems like just a very normal guy and not very polarizing to either side, which I think is important. He seems to have good values."

She’s not a fan of President Donald Trump's and is eager to cast a vote toward ending his time in office. 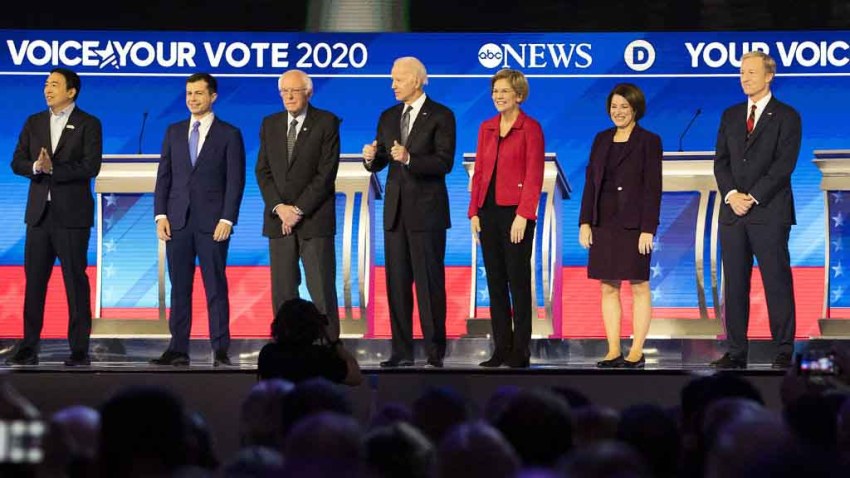 Will New Hampshire Crown a Front-Runner in the First-in-the-Nation Primary?

"I’m pretty excited. I think it’s pretty cool that I get to vote," she said. "It’s definitely time for a change."