In a wave election, however, Democrats could lose even more seats in the maps they have drawn because they spread their voters so thin, analysts say

Democrats braced for disaster when state legislatures began redrawing congressional maps, fearing that Republican dominance of statehouses would tilt power away from them for the next decade.

But as the redistricting process reaches its final stages, that anxiety is beginning to ease.

For Democrats, the worst-case scenario of losing well over a dozen seats in the U.S. House appears unlikely to happen. After some aggressive map drawing of their own in states with Democratic legislatures, some Democrats predict the typical congressional district will shift from leaning to the right of the national vote to matching it, ending a distortion that gave the GOP a built-in advantage over the past five House elections.

“We have stymied their intent to gerrymander their way to a House majority,” Kelly Ward Burton, head of the National Democratic Redistricting Committee, said of the GOP.

The nation's congressional maps won't be settled for several more months. Republicans in some large states like Florida have yet to finalize proposed changes, giving the GOP a last-minute opportunity to seek an advantage.

But the picture could come into greater clarity this week when New York's redistricting commission submits to the state legislature a second attempt to draw a map. If the Democratic-controlled Legislature rejects the map, it can take over drawing new lines in Democrats' favor. That would almost certainly blunt the GOP advantage that has been in place since the last redistricting process in 2010. 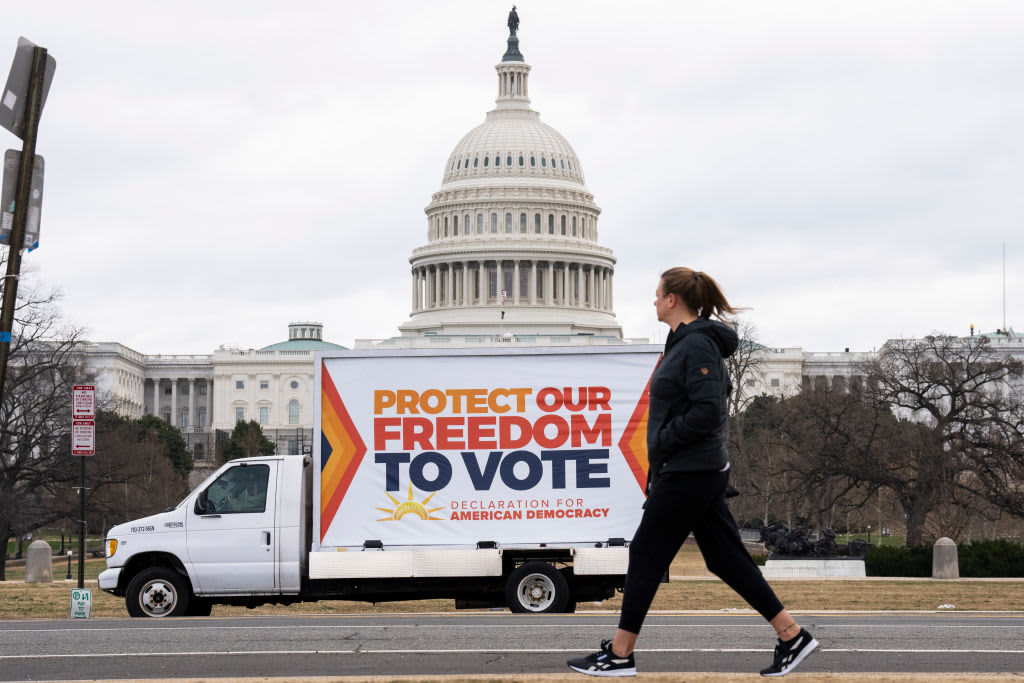 The jockeying in state capitals has implications not just for Democrats' uphill effort to maintain a majority in the U.S. House in this year's midterm elections. It will affect the broader balance of power in Washington and state legislatures for the remainder of the decade.

While Republicans say they’ve achieved their goals so far, they're surprised at how much Democrats have tried to expand the number of seats their party can win. The GOP has taken a markedly different approach by aiming to shore up its vulnerable members' districts, transforming competitive seats into safe ones.

That's in part because Republicans already expanded the map with aggressive redistricting after the 2010 census, when they controlled more states. Now, as the lines are adjusted to meet last year's census figures, they are locking in their gains while Democrats are taking risks to fight back.

In a wave election, Democrats could lose even more seats in the maps they have drawn because they spread their voters so thin, analysts say. And, if political coalitions shift in upcoming years, seats Democrats thought were within reach could suddenly disappear.

“Republicans have given themselves pretty good tsunami protection,” said Michael Li of the Brennan Center for Justice, which tracks redistricting. “But for Democrats, if it rains a little, their house is flooded.”

You’ve probably heard of gerrymandering, the term for when politicians redraw political districts to either consolidate power — or break up their opponents’ supporters. But you probably don’t know that it dates back to the earliest years of the country and was named after a district that looked like a salamander. And you also may not know how it directly affects your life. LX News host Nik Z breaks it down with Dan Vicuna of Common Cause.

The Democratic push comes as the party has unsuccessfully fought to ban partisan gerrymandering nationwide — their elections bill barring the practice died in the Senate last week during a Republican filibuster. Li said Democrats, however, are still gerrymandering in states they control, sometimes aggressively as in Illinois, other times relatively lightly, as in New Mexico and Oregon.

In contrast, experts say Republicans, who control more states, have gerrymandered heavily in places like Texas, North Carolina and Ohio. But the GOP's Ohio maps were tossed out by the state Supreme Court this month, and Democrats are hopeful North Carolina's high court follows suit with the districts there, part of the reason for the party's increased optimism.

The next and biggest opportunity for Democrats is in New York, which will test how much power Democrats are willing to give up to fight gerrymandering. Saying they wanted to take partisanship out of redistricting, Democrats there in 2014 backed a ballot measure to put the process in the hands of a bipartisan commission. But the state legislature can overrule the commission. In 2014 it was divided between Democratic and Republican control. Now Democrats have a supermajority in both houses.

The New York Legislature already rejected the commission's first attempt at maps, and can seize control if it rejects the second one, due by Tuesday.

“The Democratic leadership and those on the far left that run the show in Albany, they’re hellbent to take this process over to derail the commission, and to have the party bosses in Albany draw the maps,” said Nick Langworthy, chairman of the New York GOP. “I think that they looked at a handful of states to give them a shot to hold on to the majority.”

Republicans need only to net five seats in November's election to gain control of the U.S. House. They started the redistricting cycle controlling line-drawing in states representing 187 House seats while Democrats controlled only 75.

That means the final outcome will inevitably favor the GOP, no matter how hard Democrats fight back, said Kimball Brace, a veteran redistricting consultant. “They're ending up still putting a Republican flavor on the overall plan,” Brace said.

So far, the GOP has gained a handful of seats in the maps that have been finalized, but it's hard to put a precise number on how many because half of the states have yet to formally adopt maps. If Democrats are aggressive, for example, they could net four seats in New York and largely wipe out the GOP's national gains. But then Republicans in Florida could counter with a gerrymander.

Still, Republicans have passed up multiple opportunities to pad their margins even more.

In Missouri, some GOP state lawmakers are fuming that the legislature is advancing a plan that locks in the status quo rather than trying to turn Democratic Rep. Emanuel Cleaver's Kansas City-area seat to the GOP. In Indiana, Republicans did not split up the Gary-based district represented by Democratic Rep. Frank Mrvan.

Even in Georgia, where Republicans flooded a seat in the Atlanta suburbs held by Democratic Rep. Lucy McBath with GOP voters, they balked at doing the same to her Democratic neighbor, Rep. Carolyn Bourdeaux. Instead, they packed Democratic voters into Bourdeaux's district, making it safer so no other Republicans' seats would be at risk.

Adam Kincaid, executive director of the National Republican Redistricting Trust, said shoring up Republican incumbents is the party's top priority. He cites Texas, where the GOP-drawn maps make the few Democratic seats even more Democratic. That stacks up more Republican voters in the 23 GOP-held congressional districts and transforms them into safe seats. Republicans and their backers spent $20 million on races in the state during the 2020 cycle. Now, Kincaid said, they can direct the money elsewhere.

“This cycle has unfolded just about exactly as we expected it to — with the exception that Democrats have placed a bigger bet than I expected,” Kincaid said.

In contrast to the GOP, Democrats have been eager to spread their voters around, even at the possible expense of their own incumbents.

The starkest example is in Nevada, where the party's mapmakers moved liberal voters from Rep. Dina Titus' once-overwhelmingly Democratic Las Vegas district to shore up two neighboring swing seats represented by Democratic Reps. Steven Horsford and Susie Lee. That may keep all three seats safely Democratic in a good year, but puts them all at risk in a tough election cycle for Democrats like the current one.

Burton contended that tactical decisions like those made by Nevada Democrats and others elsewhere are not gerrymandering, but simply drawing lines to make seats competitive.

Joel Wertheimer, a Democratic civil rights lawyer and analyst for the liberal group Data for Progress, has predicted for months that redistricting will shift the typical congressional district from about two percentage points to the right of the national vote to the five-point margin of Biden's 2020 popular vote victory.

He credits it to a change in the mindset of Democrats willing to risk bigger losses for an eventual better shot at the 218 seats needed to control the House.

“I think the calculation that Democrats are making is, do we care if we have 180 or 190 seats?" Wertheimer said. “I just want to have the majority.”