The drama and deadlines driving action on Capitol Hill right now can be disorienting. Democrats are trying to pass more than $4 trillion in infrastructure and social programs at the center of President Joe Biden’s agenda — and at the same time avert a government shutdown and prevent a federal default that could send financial markets crashing.

“The next few days will be a time of intensity,” House Speaker Nancy Pelosi wrote in a letter to colleagues over the weekend. That might be an understatement.

Adding to the challenges for Democrats are their thin advantages in both chambers, the end of the fiscal year and intraparty disagreements over the size and scope of Biden's signature social spending and climate legislation. Republican leaders have encouraged their members to reject almost all of it, leaving Democrats to go it alone.

Biden has been meeting with fellow Democrats as they navigate the political obstacle course. 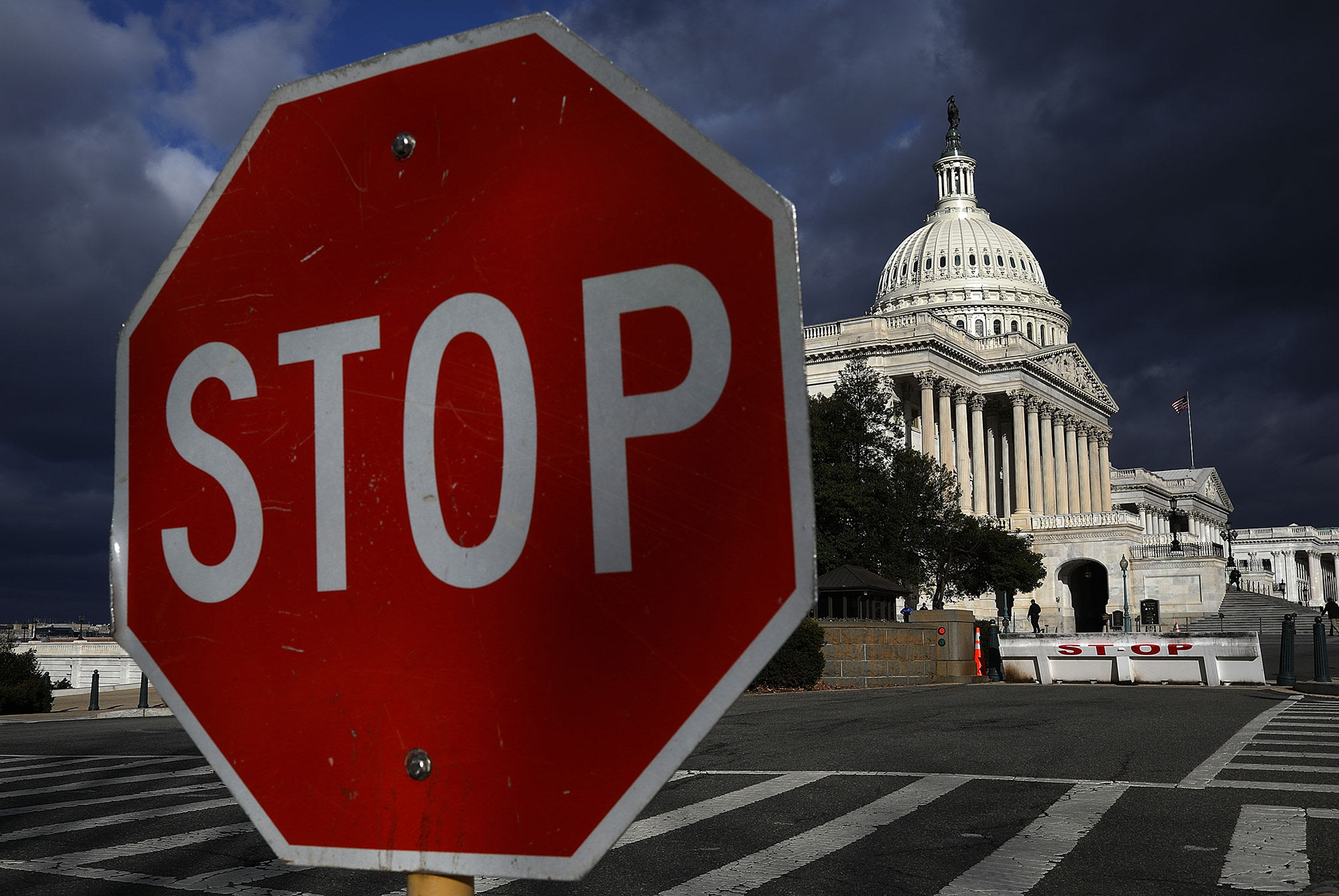 What Could Cause a Government Shutdown and What Is the Debt Ceiling? 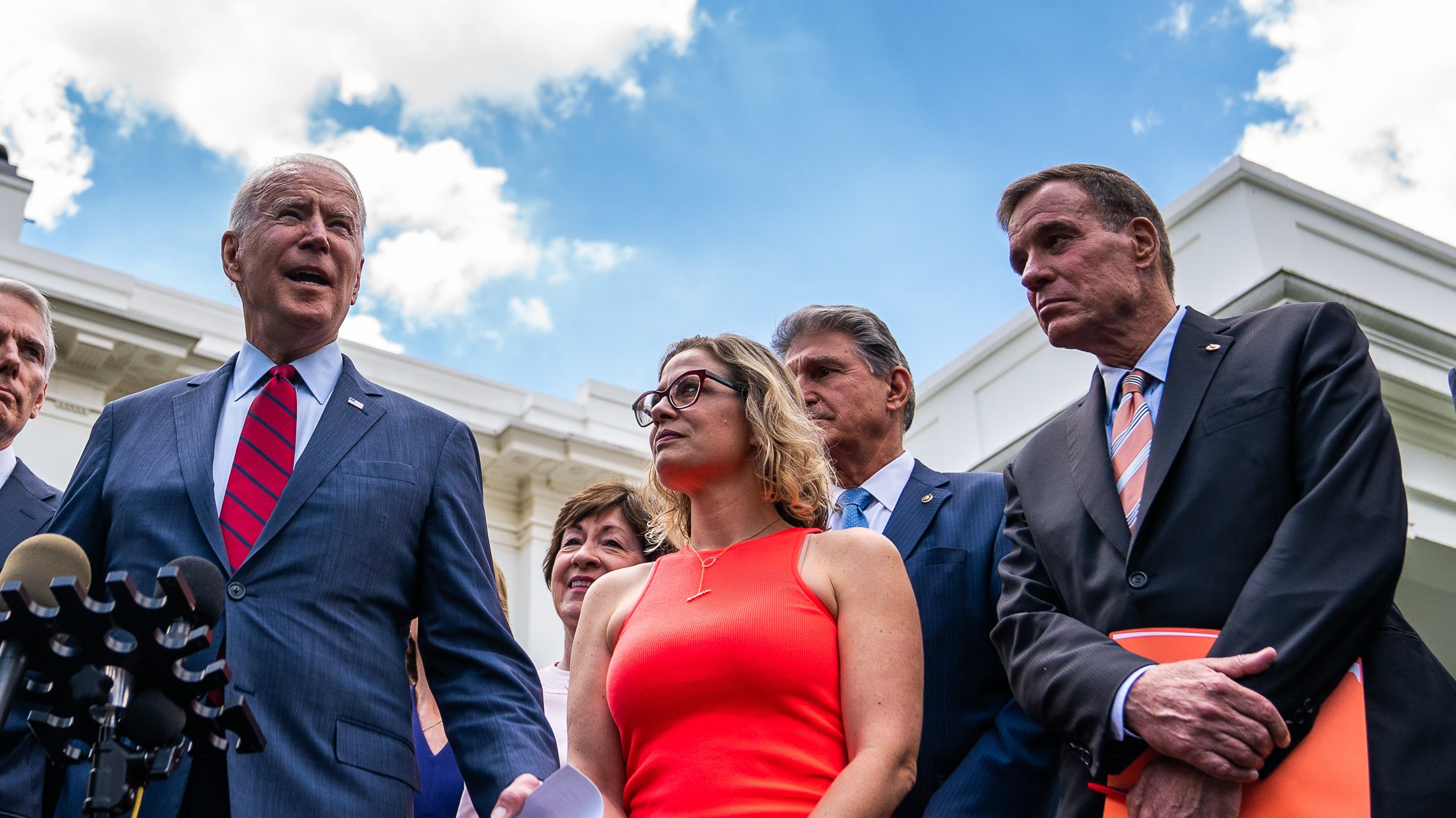 “We’ve got three things to do: the debt ceiling, the continuing resolution and the two pieces of legislation,” Biden said Monday. “If we do that, the country’s going to be in great shape.”

A guide to understanding it all:

Averting a government shutdown at midnight on Sept. 30 — the end of the fiscal year — has become an anxiety-inducing ritual in Washington. This year is no different.

The House last week passed a measure that would both keep government open and suspend the debt limit by a party-line vote of 220-211. The Senate blocked that bill 50-48 on Monday evening after Senate GOP Leader Mitch McConnell said his members wouldn't help raise the debt limit.

One possible path to avoiding a shutdown: Democrats could separate government funding from the debt limit. McConnell says Republicans would support that.

The stopgap spending legislation includes bipartisan priorities, including $28.6 billion in disaster relief for Hurricane Ida and other extreme weather events and $6.3 billion to support Afghanistan evacuees after the end of the 20-year war.

Senate Minority Leader Mitch McConnell (R-Ky.) says it's up to the Democrats in Congress to raise the debt ceiling because they hold the White House, the House and the Senate.

Congress has a bit longer to resolve the debt limit issue, as the U.S. is not at risk of defaulting on its accumulated debt load of roughly $28 trillion until mid-October. But it is unclear, for now, how Democrats will get around Republican opposition.

The U.S. has never defaulted on its debts in the modern era, and historically both parties have voted to raise the limit. Democrats joined the then-Republican Senate majority in doing so several times during Donald Trump’s presidency, including a suspension of the debt limit that expired in August.

But now that Democrats have unified control of Washington, McConnell has ruled out returning the favor.

McConnell has blamed a proposed $3.5 trillion tax and spending bill and other Democratic priorities for the need to increase the debt limit. But that formula has it backward. Raising the debt limit is needed to make good on past — not future — spending decisions, including the Republicans' $1.5 trillion, the deficit-financed tax overhaul that Trump signed into law in 2017 and additional trillions in coronavirus relief that passed with broad GOP support.

The legislation passed so far by the House would cover borrowing authority through the end of 2022.

Treasury Secretary Janet Yellen warned lawmakers at a Capitol Hill hearing Tuesday that the United States is close to exhausting its federal borrowing capacity, which could result in a financial crisis and economic recession.

Democrats and Republicans in the Senate joined together in a rare bipartisan moment over the summer to pass the $1 trillion public works measure. It has been bottled up in the House ever since, on hold while the Democratic Party’s moderate and progressive wings have sparred over the details of the much larger separate package, which would spend $3.5 trillion over a decade on a multitude of Democratic priorities.

Despite the 19 Senate Republicans who voted for the $1 trillion measure — and the money it would bring to their districts — House Republican leaders are encouraging their members to oppose it. That's because Democrats are linking it to the larger legislation that includes their social and environmental priorities.

The bipartisan infrastructure measure would authorize nearly $550 billion in new spending over five years for public works in all corners of the country. There’s money to rebuild roads and bridges, shore up coastlines against climate change, protect public utility systems from cyberattacks and modernize the electric grid. It would also pay for new public transit projects, upgrades and repairs to airports and railroads and the replacement of lead drinking water pipes.

$3.5 TRILLION IN SOCIAL AND ENVIRONMENTAL PROGRAMS

With no Republican support, Democrats are trying to pass the separate $3.5 trillion measure on their own by using an elaborate process called budget reconciliation. Using it allows the bill to bypass an otherwise certain GOP filibuster. But Democrats can't move forward until they reach agreement among themselves on what the legislation should contain.

The bill as drafted includes an assortment of long-time Democratic priorities, including an expansion of existing health, education and child care programs for Americans young and old. Republicans are lockstep opposed to the plan, which would be paid for by increasing the corporate tax rate, from 21% to 26.5% on businesses earning more than $5 million a year, and by raising the top rate on individuals from 37% to 39.6% for those earning more than $400,000 a year, or $450,000 for couples.

Besides the disagreements in the House, moderate Democratic Sens. Joe Manchin of West Virginia and Kyrsten Sinema of Arizona are making a stand of their own, saying they can't support a package that totals $3.5 trillion, even if Democrats succeed in covering the cost with tax increases and other revenue. Manchin has previously proposed spending $1 trillion to $1.5 trillion.

Asked Sunday on ABC if she agrees the final number on the so-called reconciliation bill will be “somewhat smaller” than $3.5 trillion, Pelosi responded: “That seems self-evident.”