Jacobs, who agreed last week to temporarily step aside from his nonprofit work and political activities on behalf of Garcetti, faced additional sexual misconduct allegations from two more men who recently came forward.

Los Angeles Mayor Eric Garcetti Wednesday denied witnessing any alleged sexual misconduct or harassment by his former Deputy Chief of Staff, Rick Jacobs, who has been accused by multiple men.

"No, absolutely and categorically no," Garcetti said when questioned by reporters about the allegations during a remote COVID-19 update.

Garcetti said it was a "mutual decision" that he and his longtime top adviser parted ways professionally.

"...But I did ask him to, right now, have us be separated," Garcetti said, and that the decision was made based on "new information."

The City Attorney's Office has hired an outside law firm to investigate sexual misconduct allegations against Jacobs, it was reported last week.

"Our office has retained an outside investigator to do an independent investigation," Rob Wilcox, spokesman for City Attorney Mike Feuer, told the Los Angeles Times 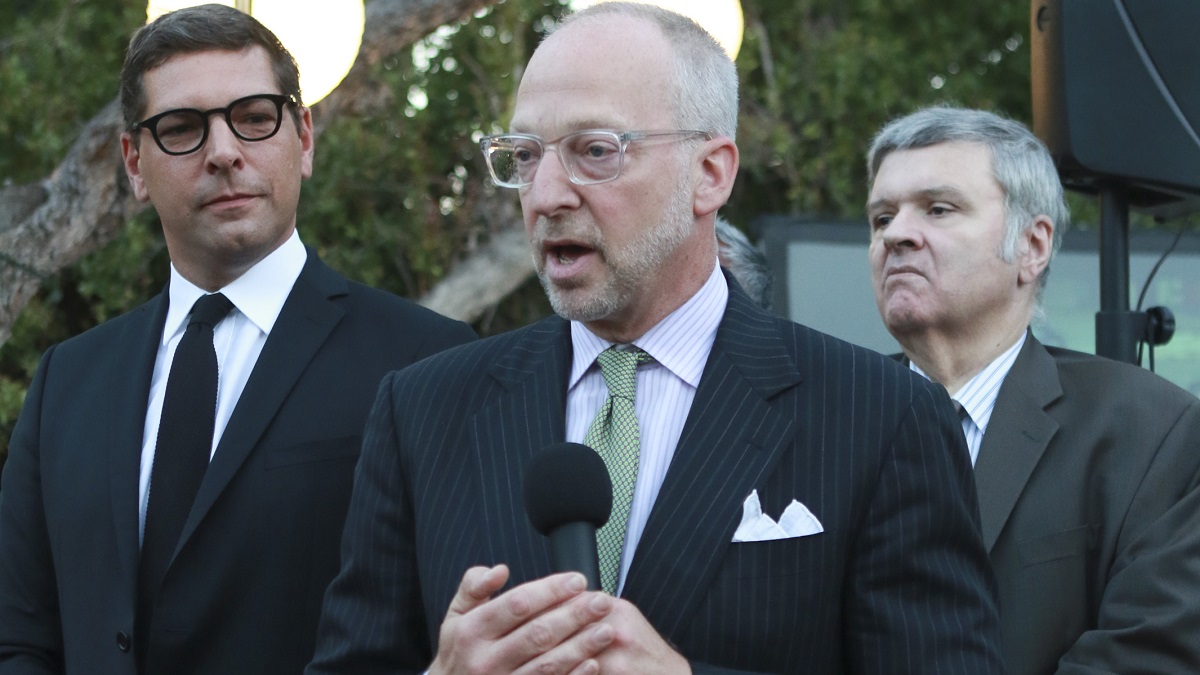 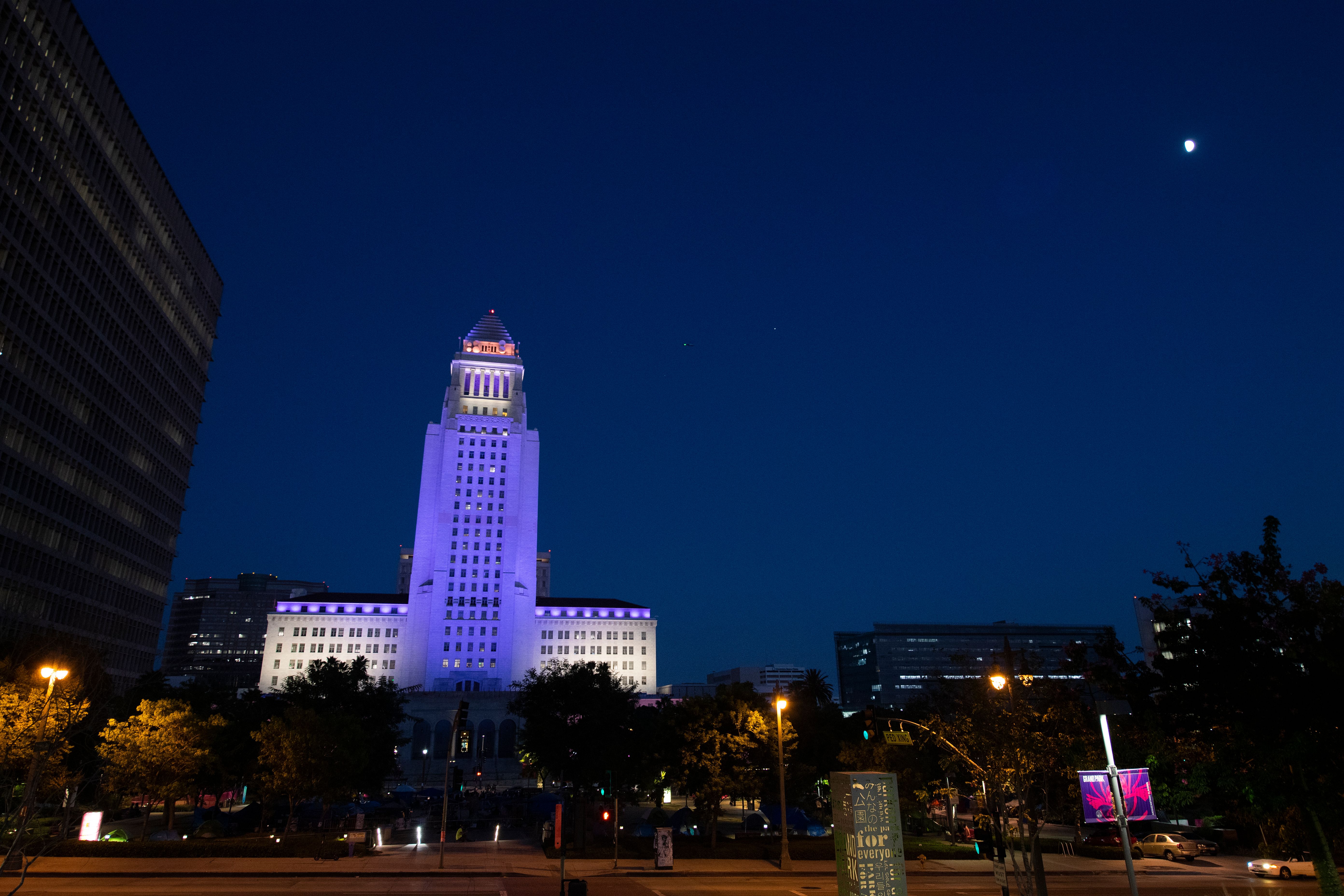 Leslie Ellis, of Ellis & Makus, has been retained to examine the allegations, two sources told The Times. Ellis is a specialist in workplace investigations, and plans to interview Los Angeles Police Department Officer Matthew Garza, who made the initial complains, as well as others who have accused Jacobs of misconduct, The Times reported.

Ellis was retained in September to represent the city, along with the City Attorney's Office, in the officer's case, a source told The Times. The officer's lawsuit against the city was filed in July.

Jacobs, who agreed last week to temporarily step aside from his nonprofit work and political activities on behalf of Garcetti, faced additional sexual misconduct allegations from two more men who recently came forward.

The Times reported two men said they were targeted by Jacobs, one claiming he was groped by Jacobs at a party in 2012 and the other saying Jacobs tried to forcibly hug and kiss him at an event in Los Angeles last year.

Neither man provided his name for fear of reprisals, but according to The Times, both of their accounts were verified by friends who confirmed Jacobs' actions.

The paper also reported interviewing various people who know Jacobs and who said they were surprised by the accusations and never witnessed any misconduct by Jacobs.

Jacobs has denied any wrongdoing.

A lawsuit filed against Jacobs in July alleged that Garcetti personally witnessed Jacobs' misconduct but did nothing to stop it.

A reporter says Rick Jacobs crossed a line with unwanted touching and kissing, a second allegation against one of the mayor's political advisors. Eric Leonard reported on NBC4 News on Tuesday, Oct. 20, 2020.

Jacobs issued a statement last week saying, "For the past 17 years, I have dedicated myself to advocacy and public service. I do not want this to be a distraction. Therefore, I will take a leave from my nonprofit work and my volunteer political work with the mayor."

Garcetti also issued a statement last week stating, "I take seriously all allegations of harassment. Rick Jacobs has stepped away from his nonprofit and volunteer political work."

According to The Times, a then-30-year-old man said he was leaving a party at Jacobs' house in 2012, and when he was saying goodbye, Jacobs squeezed his buttocks and told him, "If you and your boyfriend go south, give me a call.''

Another man described as a longtime Democratic strategist told the paper Jacobs approached him at an event last year and he "tried to hug and kiss me forcibly.'' The man said he tried to push Jacobs away, but he persisted until one of the man's friends intervened.

Then on Oct. 19, Yashar Ali, a former deputy chief of staff to Gavin Newsom when he was mayor of San Francisco, came forward with allegations against Jacobs.

Ali, a contributor to New York magazine and HuffPost, reported that Jacobs used to ``forcibly kiss me when I worked in politics,'' and he accused Garcetti of doing nothing to stop it.

In a lengthy article posted to his online newsletter, Ali said he came forward after what he described as months of silence from the mayor's office following a sexual harassment lawsuit filed against Jacobs earlier this year by Garza, a 23-year veteran of the Los Angeles Police Department who served on Garcetti's security detail.

Ali said he read Garza's sexual harassment complaint and "the allegations in the lawsuit sounded familiar to me," adding he confronted Jacobs in a text message after the suit was filed.

Ali reported that he texted Jacobs that he "hated" when Jacobs "used to forcibly kiss me on the lips in front of other people'' and that Jacobs would do it twice before turning to people nearby "and remark how soft my lips were." Ali added, "It was not something I enjoyed at all."

Jacobs texted him back "Nothing at all is true. Nothing. It's fabricated."

Ali said he reached out a senior Garcetti aide soon after his text message exchange with Jacobs about his interactions with Jacobs over the years, but no action has been taken.

Garza contends in his lawsuit the alleged harassment occurred between 2014 and October 2019. The suit contends that Jacobs would frequently extend his hand to Garza for a handshake, but when Garza reciprocated, Jacobs "would use the handshake to pull (Garza) towards him and give (Garza) a long, tight hug, while simultaneously stating to (Garza) words to the effect of `You're so strong and handsome,' 'Your muscles are so tight,' 'I love me my strong LAPD officers' or some other inappropriate comment."

The suit also contends, "Mayor Garcetti was present on approximately half of the occasions when Jacobs behaved in this way, and witnessed Jacobs' conduct, but he took no action to correct Jacobs' obviously harassing behavior."

Garza also alleges in the suit that Jacobs would regularly make inappropriate comments in front of him, such as discussing "his young gay lover, ... having `rough sex' with his gay partners'' and ``being attracted to younger men.'' The suit contends Garcetti was also present on "many, if not most of the occasions when Jacobs made sexually inappropriate comments,'' but took no action.

Garza also claims that while driving Garcetti around as part of his duties, Jacobs would occasionally reach from the back seat of the vehicle and massage Garza's shoulders while making suggestive comments such as "You're so strong'' or "I love my LAPD officers."

According to the lawsuit, there were more than a dozen occasions on which members of Garcetti's staff apologized to Garza ``for Jacobs' harassing conduct and comments,'' telling him ``words to the effect of, `I'm sorry you have to deal with that, he's such a pig.''' Yet no action was taken, the suit claims.

Jacobs, in a statement earlier this year, vehemently denied any wrongdoing, saying, "This lawsuit is a work of pure fiction, and is out of left field. Officer Garza and I worked together for many years without incident. I will vigorously defend myself, my character and my reputation."

Jacobs has not served in an official capacity in the mayor's office since 2016, but, according to sources Ali spoke with, still is considered the mayor's top adviser.

Jacobs is CEO of Accelerator for America, which he founded with Garcetti. The organization ``finds and develops solutions to economic insecurity and shares them with cities to create national change from the ground up," according to its website. "We are led by an Advisory Council comprising mayors, labor leaders, corporate CEOs and nonprofit executives from across the country, and our work is driven by an exceptional staff."

Jacobs is also the founder of Courage Campaign, which claims to be "Fighting for a more progressive California and country,'' according to its website, and he is on the board of the nonprofit Mayor's Fund for Los Angeles.