Manchin's opposition puts it all on hold indefinitely

Manchin told “Fox News Sunday” that he always has made clear he had reservations about the bill and that now, after five-and-half months of discussions and negotiations, “I cannot vote to continue with this piece of legislation.”

Manchin's choice of words seemed to crack the door open to continued talks with Biden and top congressional Democrats over reshaping the legislation. But the West Virginia senator all but said the bill would die unless it met his demands for a smaller, less sweeping package — something that would be hard for many Democrats in the narrowly divided Congress to accept. 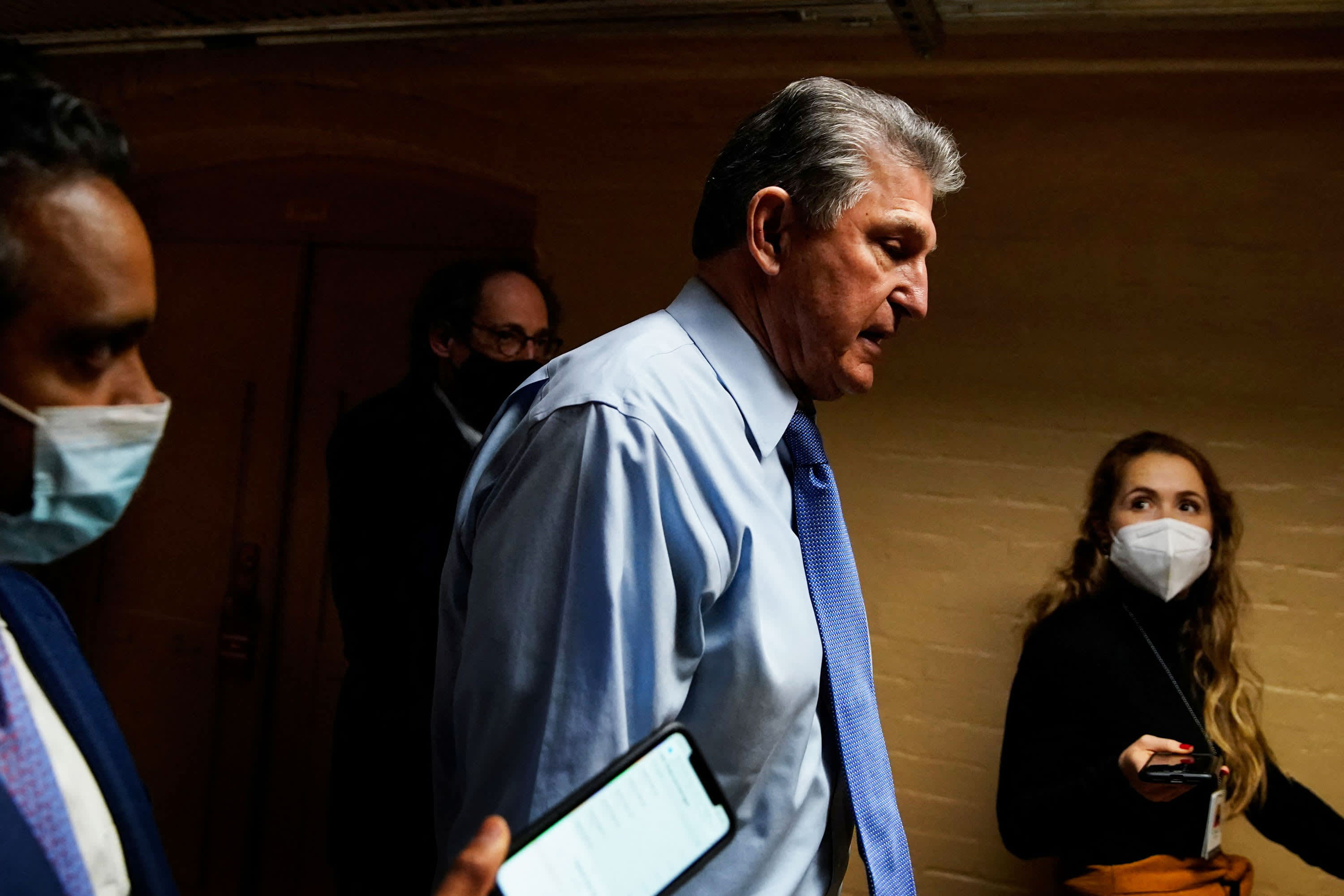 It's Not Just Joe Manchin: Here's What Stands in the Way of Democrats Passing Biden's Social-Spending Bill Biden Acknowledges $2T Bill Stalled, But Vows It Will Pass

The bill would provide hundreds of billions of dollars to help millions of families with children by extending a more generous child tax credit, creating free preschool and bolstering child care aid. There is more than $500 billion for tax breaks and spending aimed at curbing carbon emissions, which experts consider the largest federal expenditure ever to combat climate change.

In an unusually hardball response to a lawmaker whose vote is crucial in the 50-50 Senate, White House press secretary Jen Psaki called Manchin’s announcement “a sudden and inexplicable reversal in his position” and “a breach of his commitments” to Biden and congressional Democrats. She pointedly said that Manchin, whose state is among the nation's poorest, “will have to explain" why many families will have to cope with higher health and child care costs the bill is intended to address.

Psaki said in a statement that Manchin had “in person” given Biden a written proposal last Tuesday that was “the same size and scope” of a framework for the bill that Democrats rallied behind in October, and agreed he'd continue talks. That framework had a 10-year cost of $1.85 trillion. Officials hadn't previously disclosed that Tuesday meeting.

“We will continue to. press him to see if he will reverse his position yet again, to honor his prior commitments and be true to his word,” Psaki said.

A Manchin aide gave the White House about a 20-minute notice before the lawmaker announced his position on national television, said a person familiar with the senator's actions who described them only on condition of anonymity.

The legislation’s collapse would deepen bitter ideological divisions between progressive and moderate Democrats. That would imperil the party's ability to get behind any substantial legislation before the November congressional elections, when their control of Congress seems in doubt. And it would add a note of chaos just as Democrats need to demonstrate accomplishments and show a united front to voters.

Manchin's declaration was a stunning repudiation of Biden’s and his party’s top goal, and its delivery — a last-minute heads up from a staffer — seemed little short of a slap in the face to Biden. A rejection of the legislation has been seen by many as unthinkable because of the political damage it could inflict on Democrats.

It is rare for a member of a president’s own party to administer a fatal blow to their paramount legislative objective. Manchin’s decision called to mind the famous thumbs-down vote by Sen. John McCain, R-Ariz., that killed President Donald Trump’s 2017 effort to repeal the health care law enacted under President Barack Obama.

Manchin's comments, as Congress was on a holiday recess, drew fury from Democratic colleagues he already has enraged and frustrated for months. Other problems have arisen, caused by another moderate Democrat, Arizona Sen. Kyrsten Sinema, and bickering between progressives and centrists, but none has approached the magnitude of Manchin's stands.

Senate Budget Committee Chairman Bernie Sanders, I-Vt., said in a written statement that if Manchin wants to oppose the legislation, “He should have the opportunity to do so with a floor vote as soon as the Senate returns." Rep. Pramila Jayapal of Washington state, a leader of House progressives, said Manchin can no longer say “he is a man of his word.”

Rep. Suzan DelBene, D-Wash., reiterated moderates' desire to see the bill refocused on fewer programs. "Failure is not an option," she said.

South Carolina Sen. Lindsey Graham, top Republican on the Senate Budget Committee, had spent weeks trying to turn Manchin against the bill by saying it was too expensive. "I very much appreciate" Manchin's opposition, Graham said.

Manchin said he was opposing the 10-year, roughly $2 trillion bill because of his concerns about inflation, growing federal debt and a need to focus on the omicron COVID-19 variant. He accused Democrats in a written statement later of trying to “dramatically reshape our society in a way that leaves our country even more vulnerable to the threats we face,” seemingly delineating an ideological gap between himself and his party.

He also wants the bill's initiatives to last the measure's full 10-year duration. Democrats made many of them temporary to limit the bill's cost, which Manchin says is misleading.

The bill's extension of enhanced child tax credit benefits, including monthly checks to millions of families, would only be extended one year. The nonpartisan Congressional Budget Office projected the credit's full 10-year cost at $1.6 trillion, nearly the size of the entire package Manchin says he'd accept. To fit, any compromise would likely have to reduce the tax credit's benefits and deeply cut many other proposals.

They say its annual spending would be a tiny percentage of the country's $23 trillion economy and have little impact on prices. Its job training, education and other initiatives would spur economic growth and curb inflation long-term, they say.

Democrats note that CBO estimated the bill's savings would leave it adding $200 billion to federal deficits over the coming decade, small compared to the $12 trillion in red ink already projected.