Trump failed to replace all four Republican incumbents he targeted in the state, including Secretary of State Brad Raffensperger, who refused to support the former president’s direct calls to overturn the 2020 election

Gov. Brian Kemp of Georgia easily dispatched Donald Trump's hand-picked challenger on Tuesday in a Republican primary that demonstrated the limits of the former president and his conspiracy-fueled politics in a critical swing state.

Kemp will face Democrat Stacey Abrams this fall in what will be one of the nation’s most consequential governor’s races.

The GOP results, combined with the loss of the Trump-backed candidate for secretary of state, served as a stinging rebuke for the former president in a state he prioritized above almost all others. Angered by Kemp's refusal to go along with his extraordinary effort to overturn the 2020 election results in Georgia, Trump personally recruited former Sen. David Perdue to challenge the sitting governor. He also helped clear the primary field and spent more than $3 million on the failed effort.

Kemp ultimately emerged as a powerful candidate able to draw prolific fundraising totals that helped him flood Georgia with television and other ads. He tapped into the power of his office to show voters what he could do for them, unveiling a $5.5 billion, 8,100-job Hyundai Motor plant near Savannah in the final days of the campaign.

“Even in the middle of a tough primary, conservatives across our state didn't listen to the noise. They didn't get distracted," Kemp told cheering supporters, before calling on his party to rally behind his campaign.

In defeat, Perdue struck a unifying tone that has become increasingly rare in a Republican Party dominated by Trump's hardline tactics. 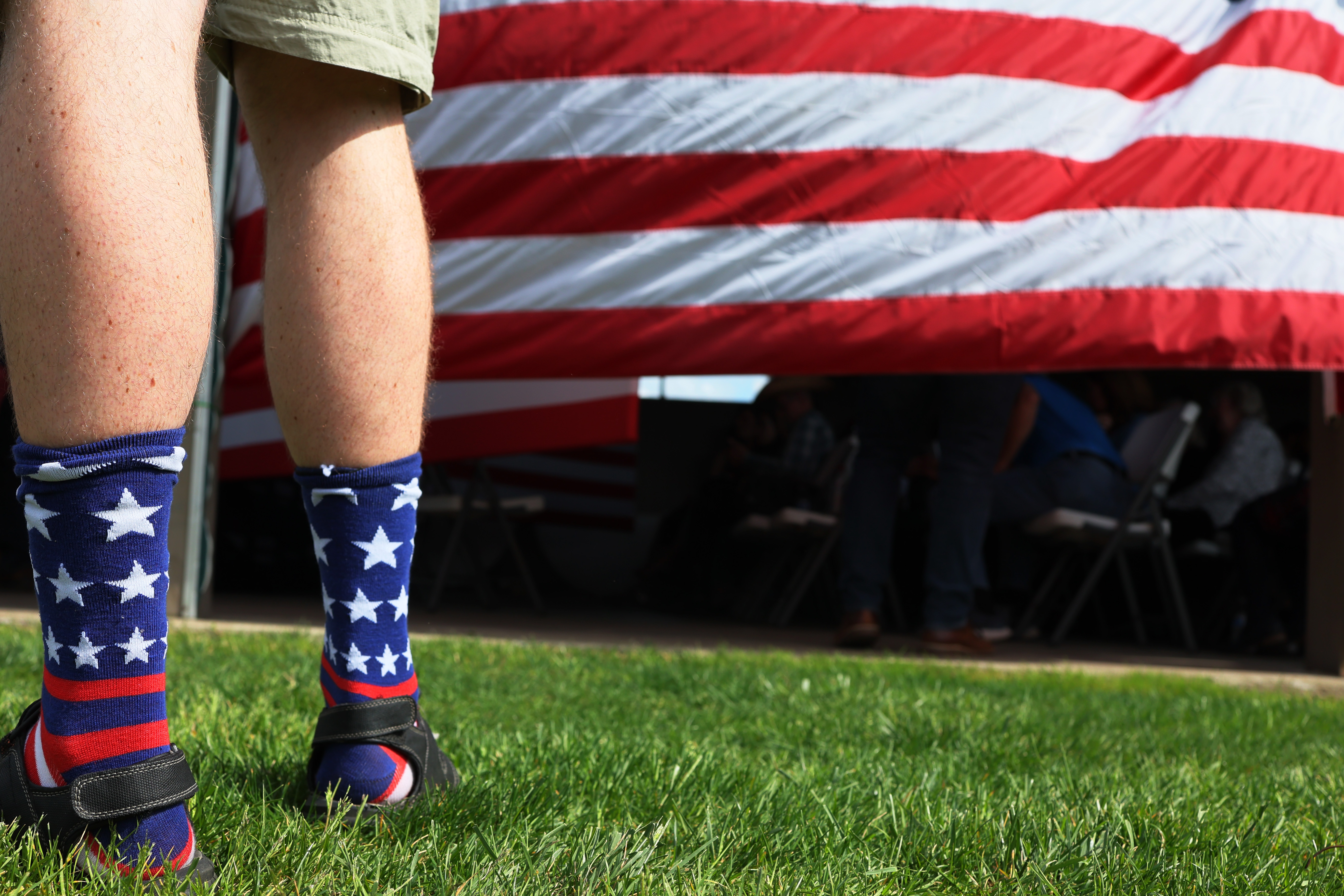 The Youth Vote May Matter More in Pa., Ga. Midterms Than Anywhere Else GOP Works to Get Out the Vote After Calling Elections Rigged

“I want you to know tonight that I am fully supporting Brian Kemp in his run to beat Stacey Abrams," Perdue said. “It’s emotional for all of us, we’re disappointed, I get that. Let’s take a few hours, lick our wounds, and tomorrow morning, you’re going to hear me going to work for Brian Kemp to make damn sure that Stacey Abrams is never governor of Georgia.”

In all, five states were voting Tuesday, including Alabama, Arkansas, Texas and Minnesota. But none had been more consumed than Georgia by Trump and his lie that the 2020 election was stolen.

Altogether, Trump failed to replace all four Republican incumbents he targeted in the state, including the governor, attorney general and secretary of state. Secretary of State Brad Raffensperger, who refused to support the former president’s direct calls to overturn the 2020 election, defeated Trump’s choice, Rep. Jody Hice.

The Georgia losses become the latest examples of a primary setback for Trump’s preferred candidates, who have lost governor’s races in Idaho and Nebraska. A Pennsylvania Senate primary is too close to call a week after the election.

Still, the totality of Tuesday’s contests underscored the sustained power of Trumpism in Republican politics 18 months after he was voted out of office. His preferred Senate candidate in Georgia, Herschel Walker, easily won the GOP nomination despite warnings from Walker’s Republican competitors about his history of domestic violence and mental health struggles. He will face Democratic incumbent Sen. Raphael Warnock in the fall in a race that could determine control of the chamber.

Regardless of Trump's involvement in their races, virtually all of the Republican candidates — even Kemp — ran on “election integrity." That phrase that has emerged as a code for the former president’s baseless grievances about the 2020 election, which were roundly rejected by courts and his own attorney general.

Sensing Kemp's strength in Georgia, however, other prominent Republicans had grown increasingly willing to defy the former president.

Trump's own vice president, Mike Pence, rallied with Kemp in the Atlanta suburbs on Monday evening. Former New Jersey Gov. Chris Christie, who also campaigned for Kemp and has been critical of Trump, described his victory as “enormous.”

“I am so proud of and happy for my friend — and just as importantly for the Georgia GOP and the people of Georgia,” Christie tweeted. “They were not going to kick out a great Governor or be willing participants in the DJT Vendetta Tour.”

Herschel Walker’s 2022 Georgia primary campaign for a U.S. Senate seat is the latest example in a long lineup of athletes running for office—and often winning.

Democrats were especially focused on a runoff election in south Texas, where longtime incumbent Rep. Henry Cuellar was facing a fierce challenge from progressive Jessica Cisneros in a race where abortion was a prominent issue. Cuellar is the last anti-abortion Democrat serving in the House. The race was too early to call with the candidates separated by 175 votes, or 0.38 percentage points, out of 45,209 ballots counted as of 2 a.m. ET Wednesday.

In Alabama, conservative firebrand Rep. Mo Brooks and Katie Britt advanced to a June runoff to represent the GOP in the race to replace retiring Sen. Richard Shelby. Britt served as Shelby's former chief of staff, while Brooks, a leading figure at the Jan. 6 “Stop the Steal” rally that preceded the Capitol attack, initially won Trump’s endorsement. Trump rescinded his backing after watching Brooks struggle in the polls.

And former Trump White House press secretary Sarah Sanders, who was the face of an administration that contributed to the nation’s stark divide, won the Republican governor’s nomination in Arkansas.

Back in Georgia, Democratic Rep. Lucy McBath defeated Democratic Rep. Carolyn Bourdeaux in suburban Atlanta after being forced into a rare incumbent-on-incumbent primary after Republicans redrew the congressional map. McBath, whose son was murdered, has become a vocal advocate for gun control.

Not far away, in Georgia's 14th congressional district, leading Trump ally Rep. Marjorie Taylor Greene won her primary election, despite a first term notable for her conspiracy theories and controversy.

We've all been tempted to sit out an election by convincing ourselves one vote doesn't matter that much. But the truth is a single-digit number of votes can have a big impact on federal and local policies. NBCLX political editor Noah Pransky looks back at several elections where only a few votes made a big difference.

Tuesday marked the first Georgia election under a new voting law adopted by the Republican-backed state legislature in response to Trump’s grievances. The changes made it harder to vote by mail, which was popular among Democrats in 2020 amid the pandemic; introduced new voter identification requirements that critics warned might disenfranchise Black voters; and expanded early voting in rural areas that typically vote Republican.

The new law also banned handing out food or water within 150 feet of a polling place, a practice common in urban areas where there are typically long voter lines.

Despite concerns about the impact of the law, there were no major or systemwide issues reported in Georgia. There were sporadic reports of polling locations opening late, minor equipment troubles and some voters finding themselves at the wrong location.

In the Atlanta suburb of Woodstock, Republican primary voter David Butler said he likes Trump, but chose to support Kemp instead of the Trump-backed Perdue.

He said Trump's endorsement had “no impact, none, whatsoever” on his decision.

“I like Trump a lot, but Trump is in the past,” Butler said.