President Donald Trump on Friday vetoed a measure that would have overturned a policy that Education Secretary Betsy DeVos issued in 2019 making it harder for students to get their loans erased after being misled by for-profit colleges.

The Senate gave final approval to the bipartisan measure in March, dealing a rare rebuke of DeVos from the Republican-led chamber. But Trump on Friday said DeVos' rules are better than an Obama-era policy that would have been restored if the measure succeeded.

In issuing his veto, Trump said the rules created by former President Barack Obama “defined educational fraud so broadly that it threatened to paralyze the nation’s system of higher education.” 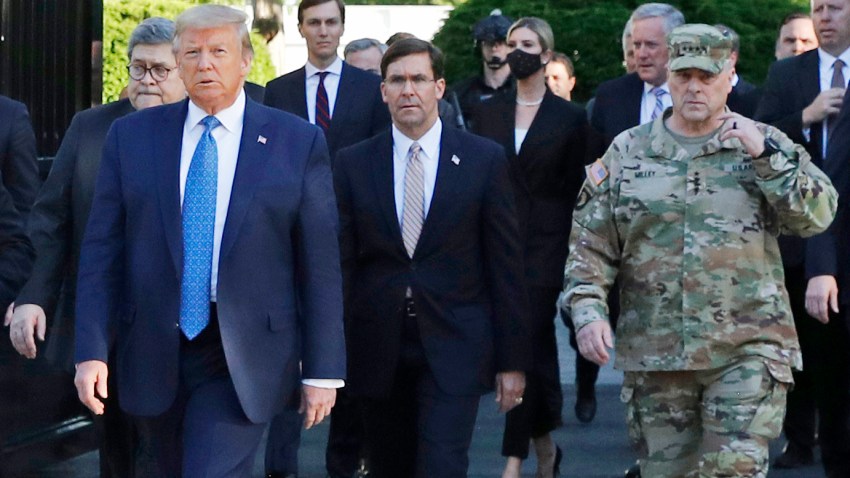 Pentagon Leaders to Face Grilling on Use of Military in Unrest

He added that DeVos' policy “strikes a better balance, protecting students’ rights to recover from schools that defraud them while foreclosing frivolous lawsuits that undermine higher education and expose taxpayers to needless loss.”

Democrats condemned the move and promised a House vote to override the veto. Rep. Susie Lee, D-Nevada, who led the the bill in the House, said the fight is “far from over.”

"President Trump sent a message to the American people that he cares more about enriching predatory schools than protecting defrauded students and veterans,” Lee said.

A statement from the Education Department thanked Trump for the veto.

“This administration is committed to protecting all students from fraud and holding all schools accountable when they fail their students,” the department said. “This administration’s rule does just that, despite false claims from many corners.”

Lawmakers moved to overturn DeVos’ policy through the Congressional Review Act, which allows Congress to overturn federal rules with a simple majority of both chambers and approval of the president.

The resolution sought to strike down DeVos’ changes to a policy known as borrower defense to repayment, which erases federal student loans for borrowers whose colleges commit fraud.

The policy dates to the 1990s but was expanded under Obama to forgive loans for thousands of students who went to for-profit college chains that used false claims to get them to enroll.

When DeVos took office, though, she suspended the rules and began writing her own, saying the Obama policy allowed too many students to get their loans erased at the expense of taxpayers.

Her changes were opposed by borrower advocates but embraced by for-profit colleges, who said their industry had unfairly been targeted by the Obama administration.

DeVos' 2019 update made it harder for students to get their loans discharged by requiring them to prove their colleges knowingly misled them and caused personal financial harm, among other changes.

Congress' effort to reverse the rules were supported by advocates for military veterans, who make up a major share of students at for-profit colleges.

Sen. Dick Durbin, D-Ill., who led the measure in the Senate, said the veto hurts veterans while helping DeVos and the “fraud merchants at the for-profit colleges.”

"My question to the President: in four days did you forget those flag waving Memorial Day speeches as you vetoed a bill the veterans were begging for?” Durbin said.

House Speaker Nancy Pelosi said her chamber “will soon vote to overturn this veto, which poses a grave harm to the financial security and futures of America’s students.”

The congressional measure was applauded by education advocates who said DeVos' rules made it nearly impossible for defrauded students to get loans erased.

James Kvaal, president of the Institute for College Access and Success, said he was “crestfallen” by the veto.

“As a direct result of today’s action, hundreds of thousands of students cheated by colleges will have no way to get a fresh start," he said. “The message to unscrupulous colleges is that there will be little or no consequences for illegal wrongdoing.”