Ice Cube, a.k.a. O'Shea Jackson Sr., is one of the most recognizable figures in Los Angeles with one of the most recognizable voices in music. Celebrating the 25th anniversary of his critically acclaimed solo album "Death Certificate" and a star on the Hollywood Walk of Fame, the rapper, writer, actor, director and producer took a moment to talk to NBC Los Angeles about his latest project: The Big3.

The same energy that saw Ice Cube become the first member of N.W.A. to take a leave the group and venture out on his own flows when asked why he didn't simply try to buy a stake in an NBA team.

"I didn't want to be a part of someone else's thing," the founder of the new three-on-three basketball league says. "I don't want to be a piece of an owner of a team. If I can't own it outright, I'm kind of cool. This, to me, is a fresher concept. I'd rather stay a fan and follow one team, but this is a whole league. We believe that it's going to take off because we believe 3-on-3 is a young game. Our players are veterans, but the game itself is a young game that appeals to a younger demographic."

So, the Big3 was born with Ice Cube the corporate face of the new league which launches at Barclay's Center in Brooklyn on June 25 and concludes at T-Mobile Arena in Las Vegas on Aug. 26. The league will also stop at Staples Center on Aug. 13.

"It's my creation," Jackson tells NBCLA.com why he decided to run with this venture. "Just being a fan of basketball, tired of guys retiring too soon—for me."

He adds, "I understand that guys can't handle that NBA schedule no more [sic], but I still think they can play. I still think people want to see them play. And it was really just about trying to create a league and a stage where guys can still do their thing. And it's coming along. It's a great endeavor. And we're having fun putting it together."

The biggest star of the league is Allen Iverson, who originally turned down the opportunity but came back around after a second approach.

"We wanted marquee names, guys that we thought would get fans excited, and we approached Allen Iverson," Ice Cube says. "And he actually turned us down at first. But then, we were a little further down the road, had things in better order and we decided to go to him again. Our commissioner, Roger Mason Jr., really solidified the deal and made it happen."

Iverson called up Ice Cube and told him he was ready to join up, but the 2001 NBA Most Valuable Player had one request: he wanted to play, but he didn't want to have a coach. One could instantly imagine a 42-year-old Iverson asking his team to come in for practice and hearing his players ask, "Practice?"

Ice Cube, understanding the value of having a marquee name of Iverson's ilk, immediately agreed to the request. And thus, Iverson became a player-coach. The new league now had its star player.

"Three-on-three is actually the most played form of team basketball because everyone plays it," Ice Cube contends. "Blacktops, back yards, anywhere there's a court, it's a half court three-on-three. And so, it's not a whole new concept. It's just taking it from the street and the blacktop and putting it in the theater on a major level, and that's what we did. And that's really what it's all about."

How Many Substitutions Are Allowed in World Cup Knockout Stages? 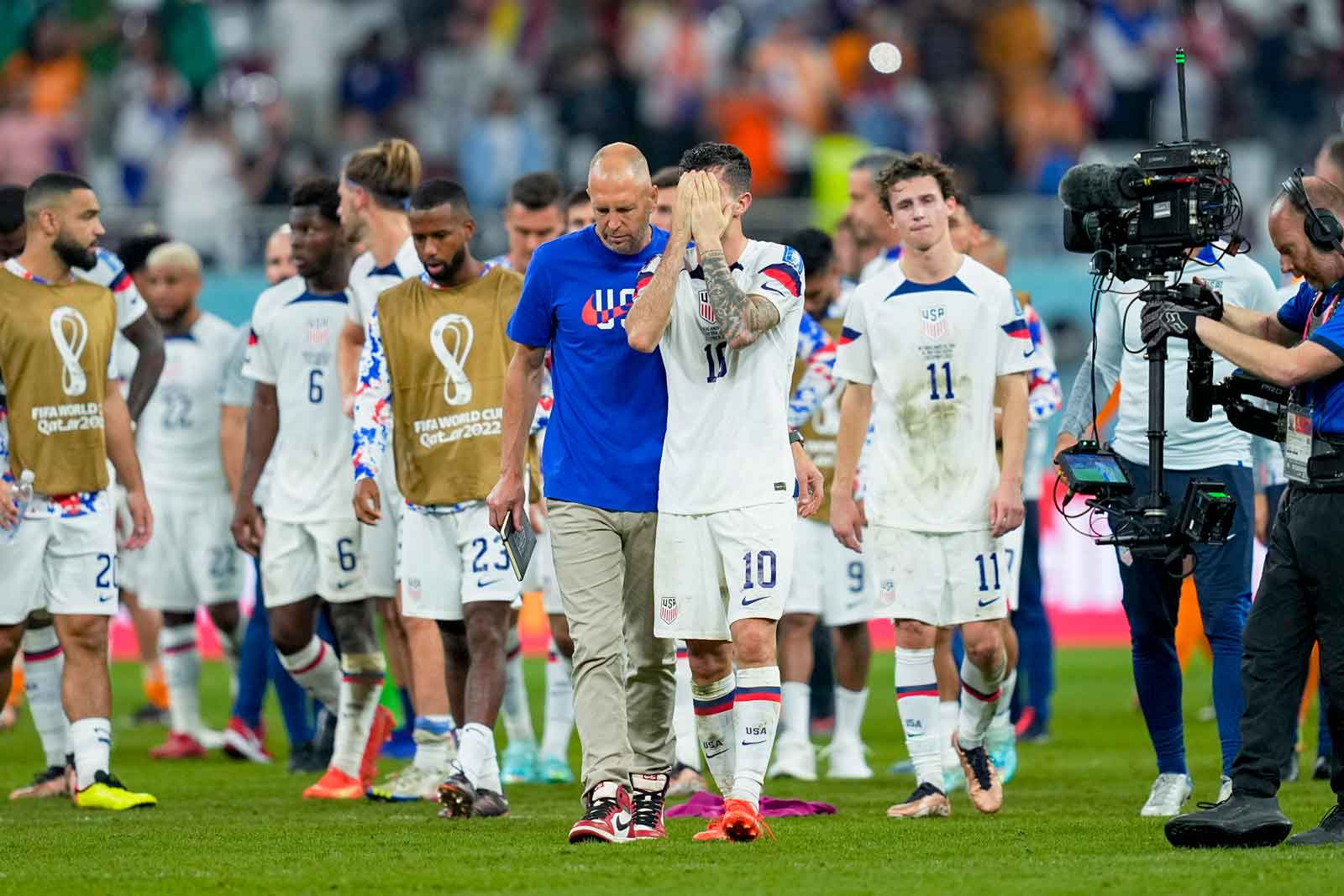 USMNT Disappointed in Loss to Netherlands, Sets Sights on Hosting in 2026

As a businessman, the executive producer of of Friday and Barbershop movies franchises appears to be ahead of the curve considering the IOC announced that three-on-three basketball will now be an Olympic sport at the 2020 games in Tokyo. Would the United States send a team of Big3 All-Stars to Tokyo? The NBA fuels the USA Basketball team that competes in the Olympics, so why not use ex-NBA players practicing and playing for a three-on-three game?

While USA Basketball may simply pull college players or select a second pool of NBA players to win gold in Tokyo, the mere fact that three-on-three basketball is being added to the Olympics suggests that Ice Cube may be striking gold with this project.

"I plan to be here forever," Ice Cube says about the Big3. "I plan to be here as long as the NBA is here. I don't plan to go nowhere [sic]. I believe we are a viable option for players when they feel like their time is done in the NBA and they don't want to go overseas and they don't want to just play pro-am pickup game. If they want to play in a real professional league, come to the Big 3."

One cannot help but admit that the new league could have a steady stream of ex-NBA stars for the foreseeable future. Playing one game per week in a half court setting allows older players to continue flaunting their talents in an environment suited to their skills. As the NBA speeds up into an up and down game, the Big3 alternative may provide a sweet spot for players that are no longer able to keep up with the fast pace of the NBA but still have enough left in the tank to conjure magic on the court.

Of course, the threat of injuries with older players is worth mentioning.

"Guys can get hurt in any league," the 48-year-old executive contends. "When you're playing rec-league, kids get hurt. AAU, high school, college, pros. So, guys getting hurt is part of the game. We're not going to say, 'Because our guys are not in the NBA no more [sic], that's why they got hurt.' Or 'our guys are a certain age, that's why they got hurt.' Our wear and tear is very limited. We've got one game a week to 60 (points) and you got subs. So, we feel like we've done everything we can to make the game as safe for the players as it can be."

Ruthlessly, the creator adds, "But if you're not in shape and you can't play, you shouldn't be out there. So, we're not going to look at it any different than any other league that has injuries."

Based on scrimmages and watching some of his players work out, Ice Cube seems confident that the product will be up to a standard that can create a foundation for the future.

Even after launching his own league, Ice Cube does not hesitate to proclaim his love for the NBA or for his beloved LA Lakers. And what is every Lakers' fan talking about these days? Lonzo Ball.

"I think he adds some excitement to the Lakers," Ice Cube says about Ball. "We need a name. I believe he has the game, but you'll never know until you see him against pro competition. Nobody else I'm checking for really out there because Lavar Ball has made his son into a household name, so he's the one I got my eyes on, so that's the one I want."

While the basketball experts may be mulling over whether the Lakers should go with Josh Jackson, De'Aaron Fox or Ball should the Boston Celtics select Markelle Fultz, as expected, Ice Cube provides a view into the wider segment of Lakers' fans that follow the team. For them, Ball appears to be a recognizable name with buzz and star power that has yet to be replaced since Kobe Bryant rode off into the sunset.

Judging by the media attention Ball received following his Lakers' workout, one cannot help but understand that Ice Cube is not alone in his assessment of the 19-year-old former UCLA Bruin being a "name."

In addition, Ice Cube also shared his views on the Lakers' recent front office changes. Although he stated that he was a fan of former Lakers general manager Mitch Kupchak, Ice Cube welcomed the arrival of Earvin "Magic" Johnson.

"I think that's one of Magic's strong suits: people like him," Ice Cube shares his perspective. "People want to be around him. People want to hear what he has to say. To me, it's a better recruiting tool. Magic Johnson—I mean, that goes without saying."