The Lakers take on Portland Friday night in their first game since a helicopter crash killed nine, including the Lakers legend and his 13-year-old daughter

When he scored 60 points in his final game as a Laker in 2016 and capped his post-game speech with an emphatic "Mamba out" and mic drop, Kobe Bryant provided fans with a dramatic end befitting 20 years of blissful Staples Center memories -- something many fans have held onto through a week of grief.

On Friday night, Staples Center will again be the stage when the Lakers play their first game in the House That Kobe Built since his death Sunday in a helicopter tragedy that killed nine people and jolted Southern California. When they arrive for the game, fans will pass long rows of flowers, candles, signs, jerseys and other items left outside the arena and LA Live -- reminders of what Bryant meant to Los Angeles.

The Lakers have tributes planned for the game, but no details have been made public.

But for some fans, you can't put a price on the tickets.

"I say somebody could offer me $10,000. I say I wouldn’t sell the tickets to them," said Nathaniel Magruder, who lives in Washington DC but planned the trip to LA months ago. "I want to be inside with that emotion, shedding a tear for Kobe Bryant. That’s where I want to be. That’s where I’m going to be tonight."

StubHub promised to donate all of its fees to the Kobe and Vanessa Bryant Family Foundation.

The Lakers have been steadily progressing toward the game against Portland, with some expressing their sorrow on social media. The team learned about Bryant's death while they were flying home from an East Coast road trip. Several players appeared to be visibly affected by the news when they got off the plane.

The NBA postponed the Lakers-Clippers game scheduled for Tuesday, when the team did light work on the court before gathering for lunch and sharing stories about Bryant, according to the Los Angeles Times.

On Wednesday, they started with drills and conducted a light outdoor football scrimage.

In a statement, the team said it is devastated by the tragedy.

"Words cannot express what Kobe means to the Los Angeles Lakers, our fans, and our city. More than a basketball player, he was a beloved father, husband, and teammate. Their love and light will remain in our hearts forever."

The family has requested that all non-perishable items left at the memorial outside Staples Center be saved, Michael Roth, vice president of communications at AEG Worldwide told NBC4 Friday. That includes jerseys, shoes, notes and artwork. Flowers will be mulched.

"I'm still sad, but I’m at peace knowing he’s with his daughter," said fan Joy Satele outside Staples Center Friday morning. "They’re going to have endless one-on-one games. And then there’s so much love here, how can you not be okay?

Roth said there will be a pre-game tribute to all of the crash victims.

Fans will receive No.8 and No.24 Kobe Bryant t-shirts, which were draped over Staples Center seats.

In the first NBA game at Staples Center since the helicopter disaster, the Clippers honored those killed in the helicopter crash with a touching tribute narrated by star Paul George. The Clippers usually cover the Lakers' banners and retired jersey numbers for their home games at Staples Center, but Bryant's retired jerseys went uncovered, on display high above the floor during the game against Sacramento. 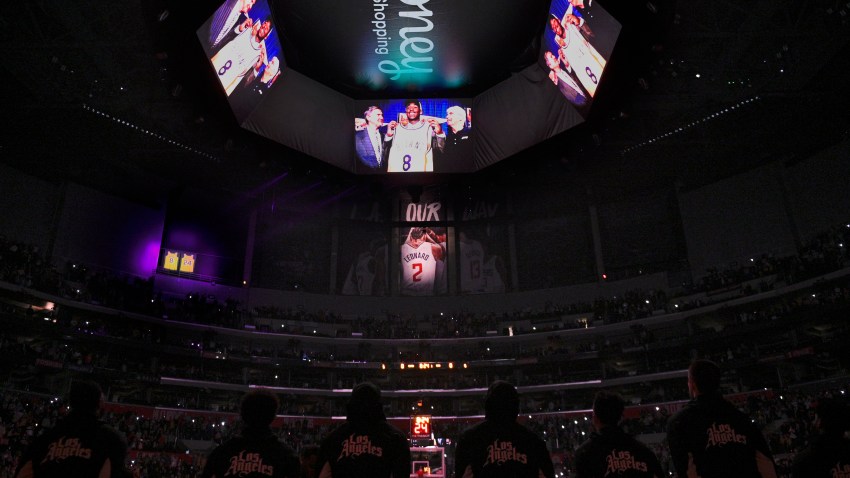 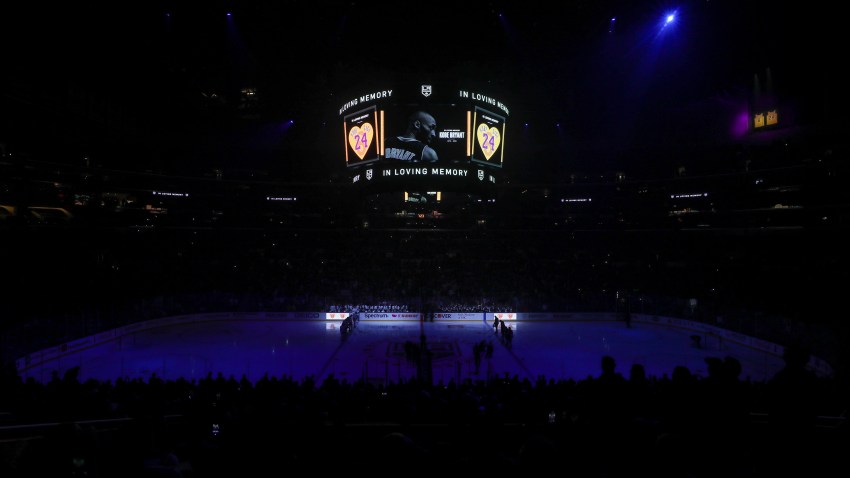 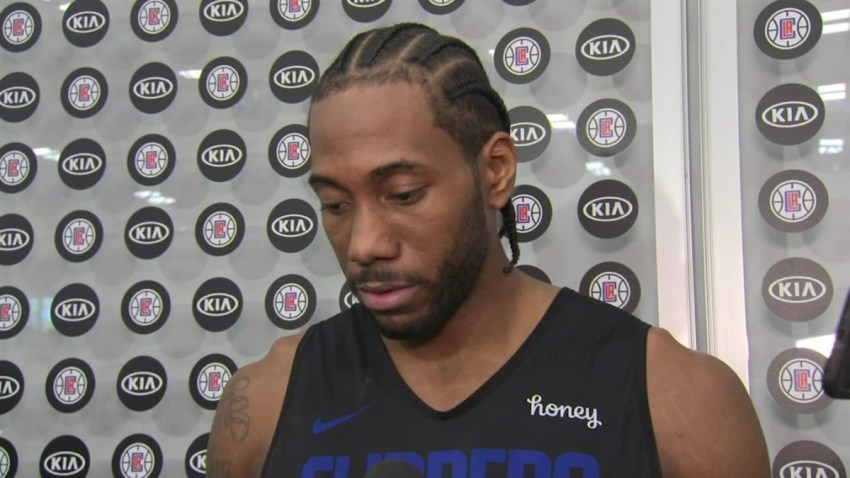 "From this point on it is always going to be tough, especially being here in LA," George said after the game. "I think every time we are in this arena and being reminded of him being in the rafters."

The Clippers tribute came one night after the NHL's LA Kings honored the helicopter crash victims with a pre-game ceremony. The team wore Kobe Bryant jerseys when they arrived at Staples Center.

Former longtime Kings announcer Bob Miller delivered a heartfelt speech before a video tribute and 24-second moment of silence. At the end of the first intermission, the Kings played Kobe Bryant's postgame speech from his final NBA game in which he scored 60 points.

The Kings' uniforms included a special logo for Bryant and Gianna.

Staples Center also was the site of Sunday's Grammy Awards, where artists also shared tributes to the crash victims.

The helicopter crashed in foggy conditions on its way to a girls basketball tournament at the Mamba Sports Academy in Newbury Park.

The charter company that owned and operated the helicopter said Thursday it was halting its services for “operational reasons.” Representatives for Island Express Helicopters told NBC News it was not clear how long the suspension of service would last.