The Los Angeles Lakers led by nine points with 1:28 remaining in regulation, but an epic collapse led to an overtime period against the Boston Celtics

The Los Angeles Lakers and Boston Celtics have a storied rivalry that accounts for heated summer meetings in the NBA Finals and icy cold encounters in the regular season.

"I enjoy this a lot more," Lakers coach Byron Scott responded when asked if he enjoyed beating the Celtics. "I'm a happy man tonight."

On Sunday evening at Staples Center, the Lakers nearly gave away the game in regulation before securing a 118-111 victory in overtime. Off the bench, Jeremy Lin and Wesley Johnson led LA with 25 points and 22 points, respectively. For both, Sunday night marked season highs in the scoring category. 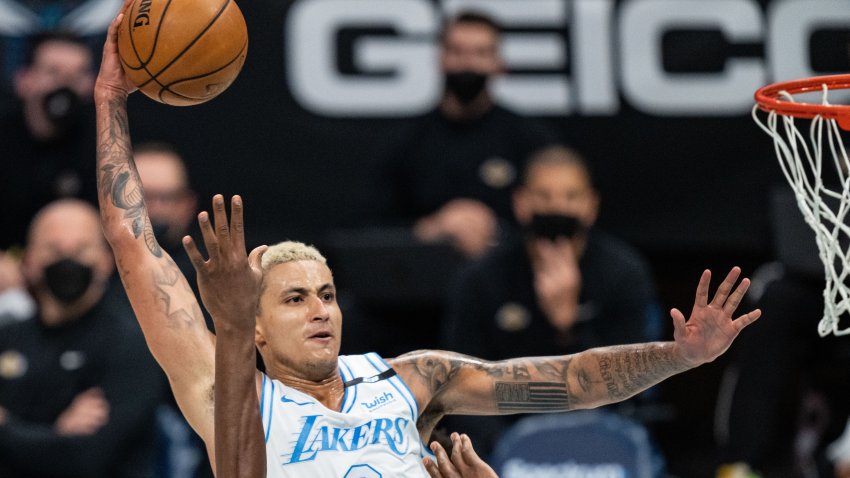 However, as the Lakers' locker room celebrated the victory , one could not help but fixate on the collapse that forced the game into overtime. With 1:28 to play in regulation, the home team led by nine points after Nick Young hit a 12-foot fadeaway jumper.

Over the next 88 seconds, the Lakers would commit two turnovers and miss a free throw. With Boston holding the ball and trailing by three points, Lakers coach Byron Scott opted not to foul. Instead, Avery Bradley managed to get a clean look at the basket and hit a three-pointer to beat the buzzer.

"That's twice that I've been thinking about it, and they've hit a three to send it to overtime," Scott said about fouling to avoid giving up a three. "So, I don't know if I'll think about it next time. I might just do it."

Not for the first time in the 2014/15 season, the LA Lakers had allowed a lead to dissipate at the end of regulation.

In overtime, the Lakers' defense picked up, while Lin and Carlos Boozer both chipped in four points in the extra period. Boozer, incidentally, finished as the only starter to score in double figures after failing to see the floor only one game earlier. The veteran forward would finish with 12 points and played the center position to finish the game.

Apart from Boozer, the Lakers relied heavily on their bench. Including Lin and Johnson, four Lakers scored in double figures with Young adding 19 points and Jordan Hill adding 10 points to the total. Point guard Ronnie Price fouled out in only 18 minutes of play, but the backup point guard finished with five assists and four steals. Scott credited the veteran for helping change the complexion of the game.

In the first quarter, the Celtics jumped out to an early nine-point lead. However, with Price setting up the offense, Lin driving and Johnson playing with confidence, the Lakers managed to turn the tide and take their first lead midway through the second quarter. From there, a back-and-forth contest would ultimately be decided by five solid minutes of overtime.

Sunday's victory provided LA with its 14th win of the season, but even the fans praying for losses with the hopes of earning the best possible draft pick had to enjoy beating the hated Celtics. Regardless of the records, the Lakers always relish a victory over the Celtics, and Sunday evening featured fans, players and coaches all leaving Staples Center grinning.

Next, the Lakers play the Utah Jazz on Wednesday.