After Whirlwind Week, Rams Ready for Clash With Chiefs

This was a respite for the Los Angeles Rams but certainly no vacation.

The team kept its plans to train at the Air Force Academy and stay at the posh Broadmoor Hotel in the Rocky Mountain foothills even after the NFL moved their Monday night showdown with the Kansas City Chiefs to the Los Angeles Coliseum because of a frayed football field at Mexico City's Azteca Stadium. The primary benefit shifted from altitude acclimation to getting away from the wildfires back home and doing some midseason team bonding.

"It's been a little bit wild for sure, but with that being said, there's a lot more people dealing with a lot worse than what we're dealing with right now," quarterback Jared Goff said. "We're the lucky ones and we're having a good time out here in Colorado."

The deadly Woolsey Fire that surrounded the Rams' training complex back home affected some players and coaches directly and some indirectly. 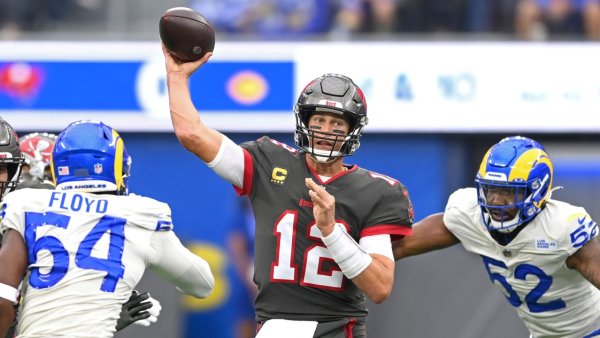 "I personally wasn't affected, but I look at my teammates as family," Ndamukong Suh said. "So, we all have to deal with it in some form or fashion."

The trip to Colorado also allowed the Rams (9-1) to do some midseason bonding, something tight end Rob Gronkowski said helped the Patriots refocus down the stretch last season after they spent a week at the academy ahead of their game against the Raiders in Mexico City.

Rams coach Sean McVay said he reached out to Patriots coach Bill Belichick for some tips about how they handled the week away in the Rocky Mountains.

"Anybody like a Bill Belichick, if they're able to give you a perspective, it'd be silly not to listen and try to apply it," McVay said.

The Rams arrived home over the weekend after what was actually a business trip.

"The Broadmoor's great. I haven't played any golf," defensive coordinator Wade Phillips said. "I've got a lot of friends here, but I haven't really seen anybody because we've been working. It's a work trip ... we're getting ready to play a game."

McVay said training in Colorado won't be a waste even though the game now will be played at sea level.

"With all the things going on right now, I think there's some guys that, at the time, wouldn't have been able to get back into their houses," McVay said. "There's a lot of things that we were doing here. One of them was, obviously, to get ready for playing in the elevation and different things like that. It does still serve you well to train in these environments.

"So, it'll help us out. Then really, we looked at it as another chance to kind of get away before the bye week, continue to connect as a team where there's not any real distractions."

That bonding may be the ultimate benefit of their brief trip.

"If anything, the last week has really made you appreciate the perspective that this gives you," McVay said. "What's so special about football is the brotherhood that you share with the teammates, the coaches, the rapport and just the camaraderie. There's nothing like it.

"To be able to go through some of these things, to also know that when you're going through real life adversity outside of football, that you have a support system, you have people that care about you unconditionally -- that's what's real."

McVay said he took in the picturesque mountains, the fresh air and the amenities of the Broadmoor, but "I really haven't had a chance to get out and explore. We're in the midst of game planning and things like that, but I know our players have enjoyed it.

"They got a chance to go to the Nuggets-Rockets game the other night. I think it's been a great getaway for the team to be together and kind of bond."