Clippers Come From Behind to Beat Lakers, 111-106, in Christmas Day Showdown

Even though the ending was the same, they upgraded the cast, and rewrote the plot, as the Los Angeles Clippers came from behind to defeat the rival Los Angeles Lakers, 111-106 on Christmas Day.

Most of the time sequels are not as good as the original.

That was not the case when the Clippers and Lakers renewed their LA rivalry on Christmas Day.

For the second time this season, the Los Angeles Clippers proved to be the more clutch and resilient team when the game matters the most, as they erased a double-digit deficit to defeat the Los Angeles Lakers, 111-106, in the NBA's Marquee matchup on Christmas Day.

Even though the ending might have been the same as the original, the sequel was anything but the same story as their first matchup on Opening Night. With an upgraded cast of characters and a new plot twist, the Clippers needed every second of the 48-minute matchup to erase a 15-point deficit and steal Christmas from the Lake Show.

"They wanted it more," said forward Anthony Davis after the loss. "We had a lot of mistakes down at the end of the game, mental mistakes at both ends of the floor. We fouled a lot in the fourth quarter, put them to the line. … We gave that one away."

Kawhi Leonard perfectly played the role of the Grinch, as he scored 35 points and grabbed 12 rebounds, stunning the sold out Staples Center crowd with 11 points in the fourth quarter to lead the Clippers to victory.

"Whatever it takes to win," said Leonard. "I was able to get to my spots on the floor. We stayed composed. We kept fighting, and we were able to get the win. Playing on Christmas it was fun."

The Clippers trailed by 12 points at halftime, and by 15 points in the third quarter. Thanks to Leonard, and some tenacious defense by point guard Patrick Beverly, the Clippers closed the game out on a 17-5 run to steal the win from their co-tenants.

"That's what Pat does. He makes hustle plays," said Clippers' head coach Doc Rivers. "You don't know where they're going to come from. It's not coached. It's just Pat being Pat."

LeBron James returned from a one-game absence with a muscle strain, and nearly had triple-double, finishing with 23 points, 10 assists, and nine rebounds.

"You get the opportunity to play the game you love on Christmas Day in front of the world," said James of his performance in the loss. "You just try and live in the moment. It won't last forever, that's for sure. You live in the moment and don't ever take it for granted." NBA's Showcase Day: Clippers and Lakers Get Into the Christmas Hoopla 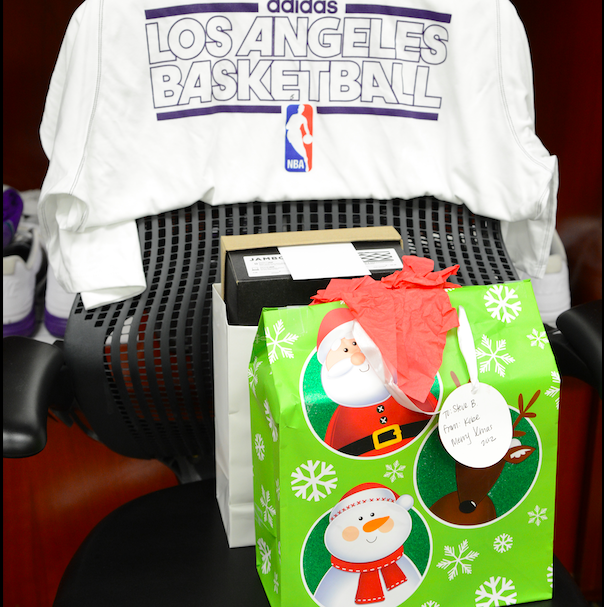 Unlike their first meeting on NBA Opening Night, both teams had their full complement of players for the rematch.

Paul George, who missed the first game with a shoulder injury, scored 17 points in his first taste of the "Battle for LA" rivalry.

"It's two-for-two in terms of intensity," George said of the game. "I think it doesn't get any better than this with this matchup. It's what it's going to come down to, I think, at the end of the day."

Kyle Kuzma, also missed the first matchup with an injury, but led the Lakers on Christmas with 25 points off the bench.

"We just beat ourselves, plain and simple," said Kuzma. "Credit to the Clippers for making shots on a stretch but we ourselves. We let them get back in the game after we had that lead, and it bit us at the end."

For the second straight game against the Clippers, the Lakers jumped out to an early double-digit only to let it slip away in the second half.

Kuzma and Kawhi lit up the Christmas tree in the first quarter scoring 15 and 14 to lead their teams respectively. Kuzma's 15 points came in just five minutes of action.

"This is what it looks like when I'm healthy," said Kuzma of his scoring. "I'm confident in my body. I've been hurt all year. This is the best I've felt and my play the last few games has reflected it."

The Clippers led 109-106 with 3.1 seconds remaining when Beverly knocked the ball away from LeBron James and out of bounds. At first, the referees ruled it was Lakers ball, but after a replay review, the ball touched James' fingers last and the call was reversed to Clippers ball.

"It was big," said Leonard of Beverly's play on James. "Bron was stepping back, trying to shoot a three to tie the game. Beverly being able to get a hand on the ball and get us the possession, it was pretty much the game-winning play."

Anthony Davis had 24 points in the loss, and Kentavious Caldwell-Pope finished with 13 for the Lakers who have now lost four consecutive games.

The Clippers outrebounded the Lakers 50-to-42, and shot 36 percent from beyond the arc, compared to just 26 percent for the Lakers.

The Clippers lead the best-of-four season series 2-0, after winning the opener 112-102 two months ago.

Despite the loss, the Lakers still hold the NBA record with the most wins on Christmas Day with 23 and have played in an NBA-best 22 consecutive Christmas Day games.

Leonard's 35 points were the most by a Clippers' player on Christmas Day, but LeBron James holds the active record for most points on Christmas with 344. Kobe Bryant still owns the all-time record with 395.