Saunders, whose mother died on Tuesday, appeared to defy a ban on protesting while on the podium

The International Olympic Committee says that after the death of Raven Saunders' mother, it has suspended its investigation into the gesture that the Team USA shot putter made when she lifted her arms in an "X" above her head. The gesture was a potential breach of rules banning protests on medal podiums.

“The IOC obviously extends its condolences to Raven and her family,” IOC spokesman Mark Adams said. “You will, I hope, fully understand that given these circumstances, the process at the moment is fully suspended for the time being.”

During the medals ceremony, Saunders waited until after the medals were awarded and the winner's anthem played before raising her arms above her head and forming an “X" with her wrists.

“We appreciate the empathy shown toward Raven by the IOC during this difficult time,” Kate Hartman, a spokeswoman for the United States Olympic and Paralympic Committee, said in a statement.

Saunders, a 25-year-old from Charleston, South Carolina, became a social media sensation after Friday's shot put qualifiers when she stepped onto the field wearing a grinning Joker face mask, futuristic sunglasses and green and purple hair. For the finals, Saunders, who's nicknamed "The Hulk," donned her now-famous green mask bearing the face of Dr. Bruce Banner's alter ego in the Marvel Comics.

What does Raven Saunders' 'X' hand gesture at the podium mean?

After receiving her silver medal at the Olympics on Sunday, and after the Chinese national anthem played for winner Lijiao, Saunders raised her arms above her head in the shape of an "X."

She told reporters after the ceremony that the gesture was in support of the downtrodden.

”It's the intersection of where all people who are oppressed meet," Saunders said.

As an openly gay woman, who has contemplated suicide and seen poverty and depression ravage her Black community and others like it, Saunders said it was her duty to speak out.

"I'm a black female, I'm queer and I talk about mental health awareness — I deal with depression, anxiety and PTSD, a lot — so for me personally, I represent being at that intersection," Saunders told NBC's Craig Melvin in a "TODAY" show interview Monday. "I decided to use my platform to speak up for all those people, for anyone who represents any part of or any one of those groups, especially, this medals is for [them]."

The U.S. Olympic and Paralympic Committee defended Saunders’ gesture during her medals ceremony, saying it “was respectful of her competitors and did not violate our rules related to demonstration.“

In a reply to a story about her appearing to defy a ban on protesting while on the podium, Saunders tweeted: "Let them try and take this medal. I'm running across the border even though I can't swim." 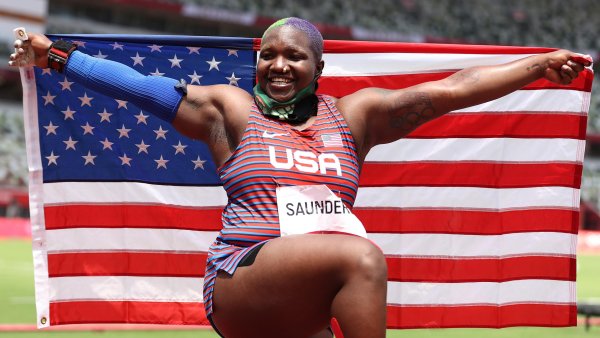 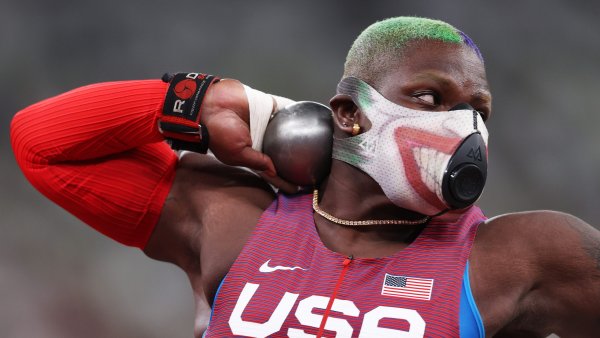 What is the IOC Rule 50 on athlete protests at the Olympics and when did it start?

The Olympics have always billed themselves as a nonpolitical entity designed to bring countries together to celebrate sports and international unity. One of the best-recognized symbols of that nonpolitical ideal is a prohibition of “propaganda” at the Games. Rule 50 of the IOC charter states: “No kind of demonstration or political, religious or racial propaganda is permitted in any Olympic sites, venues or other areas.”

The basic structure of Rule 50 was written into the Olympic charter in 1975. At that time, it was actually part of Rule 55 and it stated: “Every kind of demonstration or propaganda, whether political, religious or racial, in the Olympic areas is forbidden.” It would be refined and rewritten over the years.

In 2020, however, the killing of George Floyd in the United States — and the global activism that followed — prompted a thorough rethinking of the rule. The USOPC decided it would no longer sanction athletes who violated Rule 50, thus placing pressure on the IOC, which often depends on the national committees to enforce its rules at the Games.

In the face of mounting pressure to do away with the rule, the IOC relented, saying it would allow some demonstrations but only “prior to the start of competitions” and not on the medals podium. The IOC has also given discretion to the international agencies that run the individual sports on how — and whether — to enforce the bans.

Raven Saunders is already a shot put record-breaker, but the 25-year-old track and field star is now a wave-maker with her Joker-themed face masks and brightly colored hair. And like Simone Biles, Saunders has stepped away from competition in the past to focus on mental health. Here are five things to know about Team USA’s Raven Saunders.

Will the IOC sanction Raven Saunders for her podium protest?

Earlier, the IOC spokesman Adams said the committee was in contact with the USOPC regarding the episode.

"Not surprisingly we are looking into the matter and we'll now consider our next steps," Adams said during the IOC's press briefing Monday morning, "I don't want to say what those next steps would be until we fully understand what is going on. We don't want to pre-empt anything."

Adams said that the IOC has "created possibilities" for athletes to express themselves in press conferences, on social media, in mixed zone, and before competition begins.

"But one thing we have noted is we did a survey with 3,500 athletes (and) all those who answered wanted to protect the field of play. It would be good if everyone could respect the views of athletes," he added.

The USOPC confirmed that it was “in discussion” with the IOC and World Athletics, which governs the sport. World Athletics President Seb Coe has previously said he didn’t anticipate sanctioning demonstrations if the decision were left up to the federation.

The USOPC has stated it will not sanction athletes who demonstrate on the podium.

The IOC last month relaxed its Rule 50, which banned athletes from any protests, and now allows them to make gestures on the field, provided they do so without disruption and with respect for fellow competitors. However, it kept the rule in place that bars demonstrations on the medals stand.

Other Olympic protests in 2021, including athletes taking a knee

The opening night of Olympic soccer action saw players from the United States, Sweden, Chile, Britain and New Zealand women’s teams kneel before the their games, anti-racism gestures the likes of which had not been seen before on the Olympic stage.

They were the first of many of these sort of demonstrations over the course of the Tokyo Olympics.

Costa Rican gymnast Luciana Alvarado paid tribute to the Black Lives Matter movement in her historic Olympic performance on July 25. Alvarado, the first gymnast from Costa Rica to qualify for the Olympics, finished her floor routine Sunday at the Tokyo Games by taking a knee, placing her left hand behind her back and raising her right fist into the air.

The Australian women's soccer team unfurled an indigenous flag prior to their opening match against New Zealand. Two of the team's members, Lydia Williams and Kyah Simon, are Aboriginal Australians. Captain Sam Kerr told reporters after the match that "we wanted to do something that was relevant to our country and show unity within our group and let everyone feel that they're represented."

The captain of the German women's field hockey team wore a rainbow-colored armband as a “symbol of sexual diversity,” according to the German Olympic Committee, in solidarity with the LGBTQ community during the team's matches.

The German gymnastics team competed in full-length unitards that stretched to their ankles instead of bikini-cut leotards as they sought to push back against sexualization of women in gymnastics.