All About Jade Carey and Her Gold Medal Performance in Tokyo

Jade Carey is an Olympic gold medal winner in floor exercise. She stepped up in place of Simone Biles and participated for Team USA on both the floor and the vault competition in Tokyo.

While most athletes would be worried about matching the recent dominance of Simone Biles, 21-year-old Jade Carey proved to be calm under pressure delivering an Olympics moment for the ages on Monday morning in the floor exercise.

Team USA’s Jade Carey won gold in the women’s gymnastics floor competition on Monday. Carey, who was the only American to participate in the exercise after teammate Simone Biles withdrew, finished with a remarkable 0.166 lead to the next highest scorer, Italy’s Vanessa Ferrari.

Carey did not initially make the 24-athlete all-round finals due to International Gymnastics Federation (FIG) rules limiting each country to two competitors. She posted the third-highest score for Team USA, behind Biles and Suni Lee. 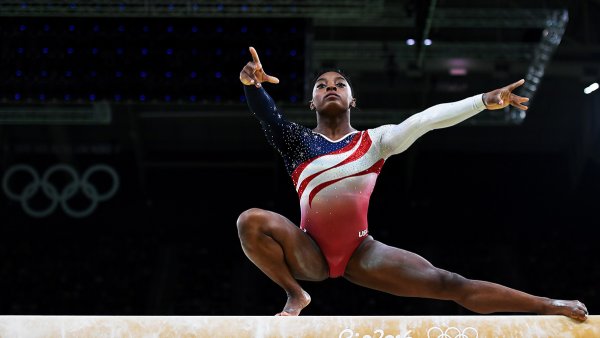 How to Watch Individual Olympic Gymnastics Events at Tokyo

Carey was technically the first gymnast to qualify for the U.S., carving a new path laid out by the FIG following the Rio Olympics in 2016. The federation cut team competition from five to four members for the Tokyo Games and opened up new individual spots, which athletes who are not on a country team could clinch without being chosen by their nation's selection committee.

Her journey to the gold medal podium was applauded by those who watched her floor routine live Monday morning.

Before Carey took the floor for her unexpected performance in the women’s Olympic all-around final last week, she talked to Biles, whose exit from the competition meant Carey got the chance to fill her spot.

What was Carey’s journey to qualifying for Tokyo Olympics?

Carey skipped the 2018 World Championships to stay eligible for the spot, and her success in four Apparatus World Cup Series competitions between 2018 and 2019 mathematically guaranteed her a bid.

After some speculation that she would forgo the automatic qualification to try for a spot on the U.S. team, which would allow her to compete in both individual and team events, she announced in June she would accept the individual spot.

What were Jade Carey's accomplishments in gymnastics prior to Olympic debut?

Carey earned a total of seven medals at world championships from 2018 to 2020, including six golds.

Her strengths are vault and floor exercise, for which she won two gold medals each at the Baku and Doha World Cups in 2019. Earlier this week, she qualified for both final events in the Olympics, posting the second-highest vault score, 15.166, and the third-highest score in floor, at 14.100.

How old is Jade Carey?

Who are Jade Carey’s parents?

Most parents won't get to watch their kids compete at the Tokyo Olympics due to coronavirus rules, but Brian Carey, Jade's dad, is an exception — he is also her coach.

She trains under her father Brian at the Arizona Sunrays gym, also located in Phoenix.

“My parents owned a gym when I was born so I was always in the gym playing,” Carey told NBC Olympics. “My parents have been very influential. They were both gymnasts when they were kids and are both coaches now.”

Brian Carey was a key figure in his daughter's decision to take the individual spot, though he says he left it up to her.

“Ultimаtely, it wаs going to be her decision,” he told azCentral. "But, in аny cаse, I wаs hoping she'd tаke thаt spot.

Carey's mother, Danielle Mitchell-Greenberg, also a former gymnast, has been keeping in close tough with her daughter, too.

"I talked to Jade after the competition and she said, 'I guess today was a good day to have the best day ever!' said told PEOPLE.

Where is Jade Carey from?

A native of Phoenix, Arizona, Carey deferred a 2017 enrollment at Oregon State to train for the Tokyo Olympics.