Authorities believed that they have found the remains of the missing couple.

The State Attorney General's Office said Saturday that two more bodies were found in the Tijuana house where the alleged bodies of a Garden Grove couple were found.

Tijuana authorities reported Friday that they found two bodies buried in a house, believed to be María López, 65, and Jesús Guillén, 70. The couple was last seen in Tijuana after they traveled from Garden Grove. They were in Tijuana to collect rent from tenants at properties in Mexico, authorities said.

The couple was reported missing by their family on Jan. 10 after they were last seen in a house located in the Obrera neighborhood of Tijuana, authorities said.

Authorities searched the home where the couple was last seen. With the help of a canine and Fire Department, excavation work was carried out in the house, which had a dirt floor in one of the rooms. Between the sand and the mud, male and female corpses were found. Both were in various states of decomposition, authorities said.

The excavation work continued and two other bodies were found on the property, a man between 70 and 75 years old, and a woman between 60 and 65 years old. Those two bodies are suspected to be the missing Garden Grove couple, according to authorities.

The State Attorney General's Office reported that a person was arrested in connection to the bodies. Authorities identified him as Santiago N.

The Associated Press reports that the suspect, the son-in-law of the Garden Grove couple, was deported from the U.S. in 2012 and had been living at a property in Tijuana owned by his in-laws.

Authorities suspect the man killed the couple over a money dispute and say he confessed to burying them on one of the properties where he lived, according to the AP.

The case is still under investigation. Further details regarding the cause of death have not been released. 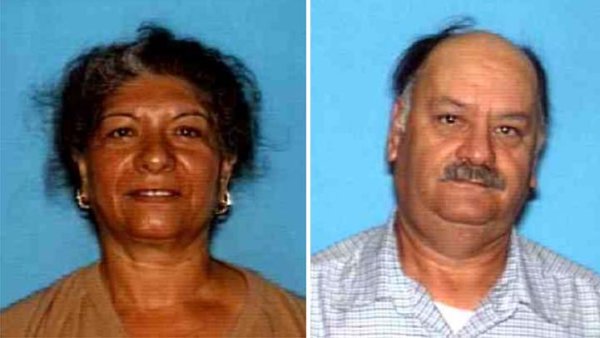