A mother of three who spent 17 years in prison before her murder conviction was overturned has filed a federal civil rights lawsuit against the city of Los Angeles, alleging detectives knowingly used false evidence to convict her, attorneys announced Thursday.

The lawsuit, filed on behalf of Susan Mellen and her children on Wednesday in Los Angeles, contends that Los Angeles Police Department Detective Marcella Winn and her then-supervisor, Richard Hoffman, conspired to deprive the South Bay woman of her civil rights.

"Mellen lost crucial years away from her normal life and family, in particular raising her children," the lawsuit states. "She was prevented from sharing the daily pleasures of everyday life with them and they were denied
those pleasures as well."

An LAPD spokesman said that as a matter of policy, the department does not comment on pending litigation.

Mellen — who was sentenced to life in prison  was declared factually innocent last November by Superior Court Judge Mark S. Arnold, who said her conviction appeared to be based on the testimony of a "habitual liar." 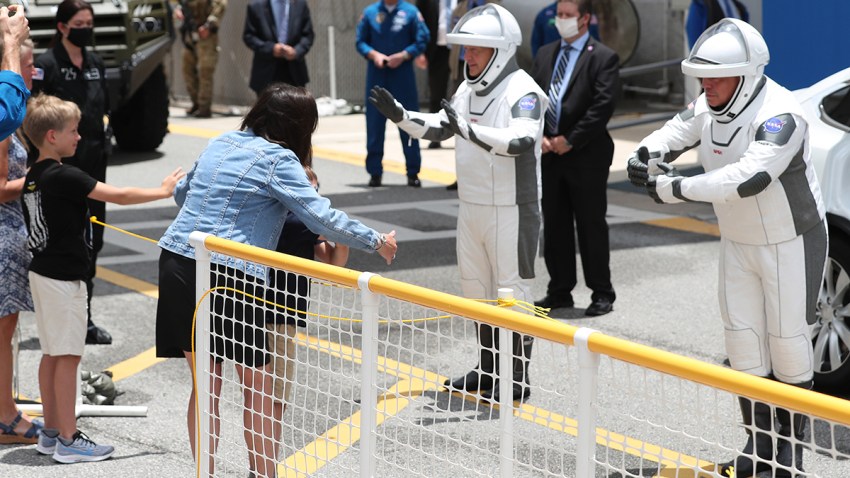 NASA SpaceX Rocket Launch Postponed to Saturday Due to Weather

A Torrance Superior Court jury convicted Mellen in May 1998, of killing 30-year-old Richard Daly, a homeless man said to be Mellen's then-boyfriend, whose body was found in a San Pedro alley.

Mellen, now 59, was released from prison last October after the judge overturned her murder conviction and dismissed the case against her.

Arnold said the only evidence that connected Mellen to Daly's murder was her purported confession to key prosecution witness June Patti.

"As it turned out, June Patti was a habitual liar," Arnold said at the Oct. 10 hearing, noting that he believed Mellen would have been acquitted if jurors had been presented with evidence about Patti's "lack of credibility."

Patti, who died in 2006, told authorities that Mellen had confessed to the killing, but her credibility came into question during a fresh review of the case, with even her own sister — a Torrance police officer — describing
her as a liar.

At a hearing in October, the judge said, "I believe (that) not only is Ms. Mellen not guilty, I believe based on what I have read that she is innocent."

The civil rights lawsuit chiefly blames Winn, "the architect of this injustice," the suit alleges.

"Winn intentionally turned her back on investigating one of the men actually involved in the murder, a gang member with the moniker Payaso, in order to convict Mellen, based solely on the word of a manipulative drug addict, June Patti, a witness Winn knew lacked all credibility," according to the complaint.

Deirdre O'Connor of the Torrance-based Innocence Matters — who successfully sought Mellen's release — said the judge's finding of factual innocence allowed Mellen to file a claim to recover $100 a day for every day she spent behind bars. She previously said it is a foregone conclusion that Mellen would receive payment of about $597,000.

Mellen, meanwhile, said she is still getting used to freedom.

"It really is a huge adjustment and I still suffered, you know, leaving the women behind (in) prison that actually became like my family, and now I come home to my family," she said Thursday. "It's really even hard to explain in words, but it's a pretty painful situation."