Bowie, a Golden Raccoon, Is Winning Hearts in Big Bear

The charismatic critter is now on view at the Big Bear Alpine Zoo, a facility that cares for and rehabilitates regional wildlife.

If you're a peak-seeking person, the kind of soul that finds solace in sky-high places, up among the clouds, then you know that you'll encounter all sorts of marvels when visiting the mountains.

You may see the reddest tree ever, in October, just by rounding the right stream. You could spy deer at play, an eagle landing in her nest, or even a thunderstorm that turns the dome above you every shade of gray.

You'll behold a blonde raccoon, a furry fellow that bears a striking coat and a story that tugs the heart strings.

That exact raccoon is now on view at Big Bear Alpine Zoo at Moonridge, a mountain-top rehabilitation facility known for its conservation-minded work with local animals.

Regional beasties are, in fact, the sole stars of the zoo, which means you'll encounter coyotes, flying squirrels, ravens, and other iconic residents of higher elevation places.

Bowie, a raccoon with an unusual lighter mane, is now one of those residents, officially, as of Oct. 27, 2021. 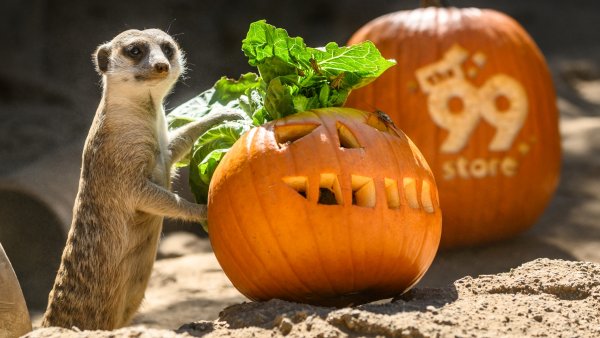 Boo at the Zoo's Trick-or-Treating Is Meer Days Away

That's when the critter made his official debut, meaning visitors can now admire him, and the raccoons he shares his habitat with (Karen, Tosh, and Bonnie are their names, as well as Abby, Bowie's first raccoon pal at the zoo).

Bowie's tale is a tough one: "He arrived at our facility several months ago — incredibly emaciated and needing quite a bit of help," reads a post on the zoo's Facebook page.

Turning to humans for food, and not bonding with other wild raccoons, the golden raccoon found the attention and care he needed at Big Bear Alpine Zoo, and a playful gaze of raccoons to call his own.

He's been off-view, bonding first with Abby, but as the end of October approaches, the handsome newcomer is now scampering in the official raccoon area, from 10 a.m. to 4 o'clock daily.