It's a First: Musso's to Offer Takeout

The Musso & Frank Grill, the history-laden Hollywood landmark, will offer the "first-in-a-century" way to pick up chops, salads, and flannel cakes.

How does one recreate the elegant experience of sitting in an atmospheric, low-lit, booth-lined dining room at home?

Turning down the lights is a start, and maybe finding a tablecloth would add to the aura.

Putting cold butter in a small ramekin? Or bunching extra olives onto a toothpick for an authentic martini? Also quite stylish, if you'd like to go the dine-divine distance.

But, whatever fans might do in their own homes, it is hard to top the one-of-a-kind experience of enjoying a special supper at Hollywood's oldest restaurant.

That's Musso & Frank Grill, which marked its centennial in 2019.

But the milestones and big moments haven't slowed for the fabled eatery, which has seen the likes of Charlie Chaplin, Frank Sinatra, and other stars grace its iconic booths, as well as film shoots fill its two dining rooms, including the recent hit "Once Upon a Time... in Hollywood." 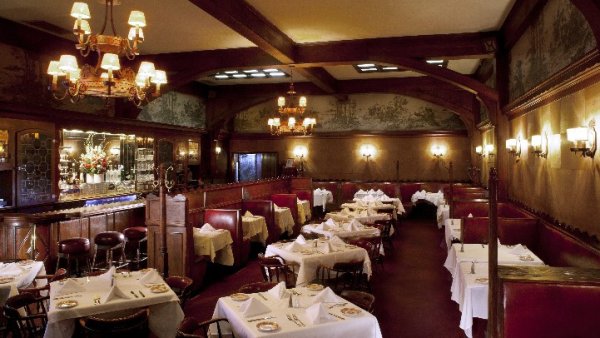 Musso & Frank Shared a Tutorial for Its Most Famous Sip 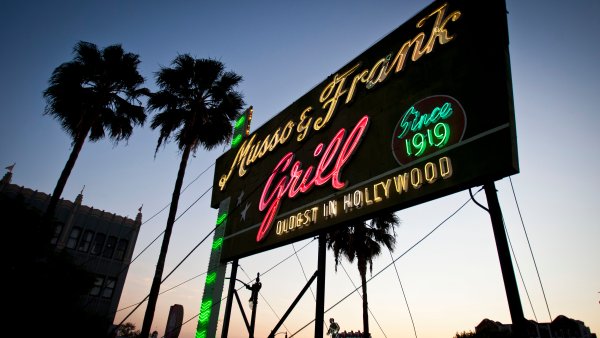 Photos: Hollywood's Musso & Frank Grill, the Restaurant With a Star on the Hollywood Walk of Fame

Now the restaurant, which briefly opened at the end of June, and has closed its in-house dining again in response to coronavirus measures, is offering both to-go meals, as well as delivery.

If you know your Musso's lore, you know that this is, indeed, a first for the restaurant, which has only ever offered dine-in during its ten-plus decades.

Another tantalizing twist? The brand-new Musso's To You program is available every day of the week.

The eatery has long closed on Mondays, famously, but now you can have your steak or salad on the first day of the week, if you do takeout or delivery.

"The announcement of the new program, which will remain in effect until L.A. restaurants are permitted to offer indoor dining once again, was made today by Mark Echeverria, Musso’s CFO/COO and a fourth-generation member of the family of owners," the restaurant revealed in a July 13 statement.

Alison Martino's Vintage Los Angeles gave Musso's mavens a head's up, earlier in July, that this temporary though tempting change was on its way.

Which means if you've ever wanted to enjoy your classic favorites at home, now is the time to do so. (Note that some items, like flannel cakes, won't be available, but you can find them again when the restaurant reopens to dine-in guests.)

It won't just be about the food and classic Musso's beverages when you pick up your vittles or have them delivered, though, which is not surprising, given the restaurant's reputation for going the distance, service-wise.

"Committed to offering to-go and delivery customers a literal and figurative taste of the classic Musso & Frank dining experience, the restaurant will include several informative pieces of history with each order," the restaurant shared in a statement.

"In addition, each to-go or delivery order will include a hand-signed card from the Supervising Chef that day as well as from the Manager in charge, thus ensuring quality and accuracy."

A hand-signed card from the chef?

That sounds like the Musso's & Frank's Grill that generations of Southern Californian diners has come to know and love, so break out the tablecloth and turn down the lights.

It's not quite Musso's, but having a Musso's meal in front of you will be sublime.

Order now, at the site, for this fleeting, "first-in-a-century" experience.