A sky-high salute to Team USA, the Olympic rings, and a series of bright patterns will shimmer nightly at the Santa Monica attraction.

The word "shine" seems to appear quite often in articles about the Olympic Games, as a way of noting those athletes who experienced an especially epic run, leap, jump, spin, vault, throw, or goal.

With that in mind, the people at Pacific Park wanted to shine a literal light on all of the amazing athletes of Tokyo 2020, the Olympians who so strongly shined in their competitions over the last few thrilling weeks.

That light will glow nightly on the park's famous Ferris wheel through the close of the games, on Sunday, Aug. 8.

You can see it starting at sunset, either by calling upon Santa Monica Pier in person or viewing the solar-powered Pacific Wheel via its live cam.

In addition to the 90-foot American flag, a mega tribute to help "... cheer on the 613 athletes that make up Team USA," the iconic Olympic rings will shimmer across the attraction's sizable sides. 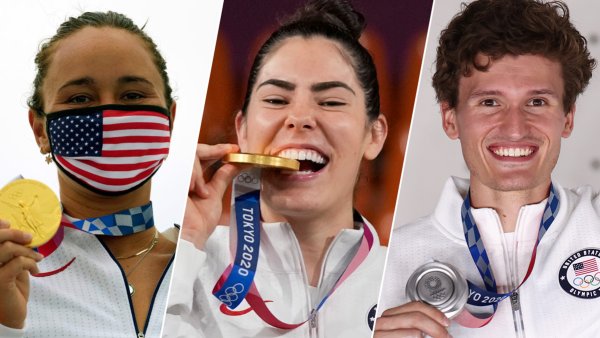 Team USA Medaled in Every New Olympic Sport in Tokyo

Look also for the Japanese flag, an honor for the current host country, as well as the French flag, which will pay respect to the host of the 2024 Olympics.

Did you have a chance to see the on-the-roll Olympic Rings when they passed through Southern California in early July?

Call the free-to-see Ferris wheel show a bright and optimistic bookend to that experience.

It's another uplifting way for Southern California fans to connect with the across-the-ocean event and to fondly reflect on the athletes who have given viewers at home so many emotional, edge-of-the-seat thrills over the last several days.