‘Star Trek' Happenings Are Ready for Launch at The Skirball

Learn how to do Klingon make-up at the first of the cultural center's "Trek"-themed public programs, events that complement the "Star Trek" exhibition on view.

What's the word in Klingon for when you're super-stoked about a sci-fi series of events, galactically cool gatherings that are inspired by a large-scale exhibition spotlighting one of the most famous television and film universes ever?

We'll need to brush up on Klingon vocabulary soon, for the Skirball Cultural Center is kicking off a cosmic run of "Star Trek"-themed events, all to complement "Star Trek: Exploring New Worlds."

That prop-packed, costume-cool exhibition opened earlier in October, and has an end date of Feb. 20, 2022.

But along the way, there shall be pop-up parties, screenings, and special soirées, the kind of add-on events that give fans another way to connect with the exhibition's themes of justice, empathy, and respect for all.

The first of the series is up on Oct. 22, and the vibe? It's an eveningtime to-do, one lit by the stars above, which makes it the perfect initial outing for the Skirball's "Trek"-tastic public programs.

Star Trek! Late Night will include "... after-hours access to exhibitions, food trucks, a cash bar, and tunes from Dublab DJ Becky Ebenkamp with a large screen showing continuous episodes of 'Star Trek' in an outdoor courtyard." 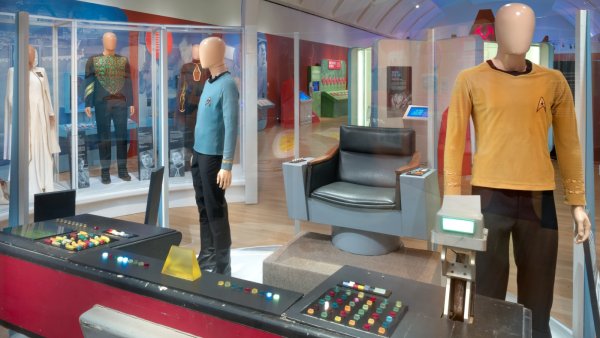 A chance to make nifty stuff at a print station is also part of the Enterprise-ing affair, as is a Klingon make-up demo.

But there's more to come on the Skirball's slate, just a few days and weeks down the road, with a screening of "Star Trek II: The Wrath of Khan," a "Best of Trek" marathon, and a showing of Adam Nimoy's "For the Love of Spock" documentary, which celebrates his father, Leonard Nimoy.

You can check dates, times, and ticket info on the Skirball site, and, of course, book an advance ticket to the exhibition, if that is your main focus.

In a word, or rather three?

"Make it so," if you'd like to attend a program or see this truly terrific and out-sized spotlight on the enduring phenomenon, a pop culture world that has taken us out of this world, so many times, while also showing us how to do life better right here on planet Earth.