The Independent Shakespeare Company is back at the Old Zoo, in a slightly different location, with "The Tempest."

Shakespeare at Griffith Park Returns: There are a few changes with the Independent Shakespeare Company's return to the Old Zoo in Griffith Park to note, like the new location (it's still at the Old Zoo, but, due to construction, in a different though not far-off spot) and the need to book your pod in advance ("(s)pace is extremely limited," says the troupe). But it is still free to see, and the Bard's timeless words still thrill. Starting on Aug. 7? Sail your ship to an enchanted and mysterious isle via "The Tempest."

Jazz at LACMA: Basking in beautiful live music, while enjoying the soft air of a summer's evening? Fans have long enjoyed many opportunities to do just that around our region, but one of the major spots to soak in sounds on a summer night can be found on the Miracle Mile. It's the Los Angeles County Museum of Art, which is welcoming back its live jazz concerts on Friday, Aug. 6. Online tickets are a must, grab-and-go food will be available for purchase near the Smidt Welcome Plaza shows (yep, head for "Urban Light"). The Friday night series will play on through to late October 2021.

Tribeca Drive-In: You've likely seen many things at Rose Bowl Stadium, from a football flying across the field to funky flea market finds. But have you taken in a tale yet, one told on the silver screen? This multi-week drive-in theater has set up soul-stirring shop at the Pasadena landmark, giving movie mavens the chance to both see a favorite film and call upon the stunner of a stadium, or at least its parking lot. Coming up over the first full weekend of August? Oh nice: We're ready for "Hook" and "The Birdcage."

Free-to-See Corpse Flower: The growing-fast, super-tall, but-not-smelly-yet specimen currently holding court at the California Science Center hasn't opened as the first week of August comes to a close, which means its famously foul odor isn't yet detectable. But you can stop and admire it, for free, which is a rare treat (it's also just outside of an exhibit devoted to how life begins, so that's beyond cool). How quickly is this quirky plant sprouting? The science museum is tracking its daily progress on social media.

Hatch Chile Season Is Here: There shall be nice smells in the air, though, as August kicks off, and you'll find those tempting aromas at a few grocery store parking lots around Southern California. For the famous green chile peppers of Hatch, New Mexico have begun to arrive, which means they'll need to be turned over an open flame. The roasting produces a fruit-fiery fragrance that is smoky and sweet, and the taste? Well, you can choose mild freshly roasted chiles, if you're not into the spicy stuff, or go for the X-Hot. The Gelson's in Westlake Village is up on Aug. 7, but there are other spots to explore. 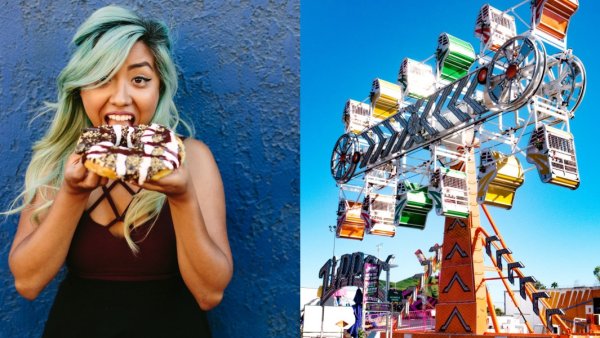