Monday's heaviest rain is expected during the morning, when downpours are possible throughout the region

And, there's more wet weather on the way this week.

Orange, Riverside and San Bernardino counties were all under flash flood warnings Monday morning. Rainfall rates of around 0.75 inch per hour were
occurring in some areas.

The flash flood warning is expected to continue into early Monday afternoon.

Four days worth of rain are possible from the winter-like storm that hit parts of Northern and Central California on Sunday bringing snow, rain and thunderstorms. The storm pushed into Southern California, where the heaviest rain is expected during the morning.

It will be a slippery drive for anyone on the road Monday. Several overnight crashes were reported after hours of moderate to heavy rain.

“We have continued chances throughout the afternoon,” said NBC4 forecaster Shanna Mendiola. “There is more rain on the way with the potential for this to last for four days.

A large debris flow was reported at about 9:30 a.m. in the 2800 block of North Westshire Drive in the Hollywood Hills. A hillside gave way behind a home, leaving about 4 feet of mud piled against the back of the single-story house.

Winter storm warnings also were expected to remain in effect until late afternoon for much of the Sierra Nevada Mountain range, which normally stores about a third of California's water supply as snowpack but is well below the April average as resurgent drought and abnormal dryness encompasses two-thirds of the state.

Some areas will likely see a break as the system pivots on Tuesday. The storm will eventually wrap around, bringing more rain and snow.

The snow level will drop to around 5,500 feet Monday and down to between 4,000 and 4,500 feet by Tuesday morning. Significant snowfall accumulation is likely in the mountains of Ventura and Los Angeles counties.

Snow, ice and wind also are likely on the Grapevine section of the 5 Freeway north of Los Angeles.

The unsettled weather will last through Thursday with scattered showers and thunderstorms. Temperatures will be below normal this week with highs in the low to mid 60s. Warmer and drier weather arrives on Friday-Saturday. 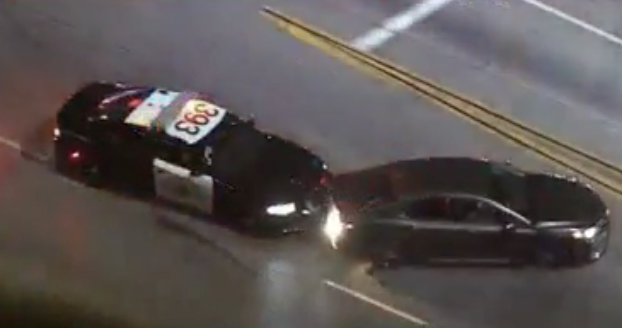 Driver Gets Away Due to Weather After Leading Authorities on Pursuit