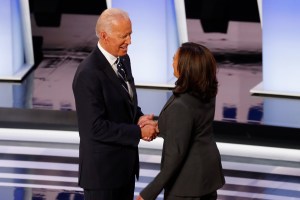 Garner, whose death sparked protests, was heard in a video saying repeatedly “I can’t breathe.” Garner’s family has called on de Blasio to fire Pantaleo, and when asked why the police officer was still on the force, de Blasio said only, "They are going to get justice." Sen. Kirsten Gillibrand of New York called the answer inadequate; Kamala Harris and Julián Castro were also critical.

Sen. Kamala Harris said to former Vice President Joe Biden as they and others sparred over whose health insurance plan was superior. Harris’ plan would phase in over 10 years a version of "Medicare for All," but unlike the proposal from Vermont Sen. Bernie Sanders, would also allow private insurers to continue to offer coverage.

Biden, who would instead expand the Affordable Care Act, criticized Harris and New York City Mayor Bill de Blasio over the cost to taxpayers. He cited estimates of about $30 trillion over a decade and said he did not “know what math you do in New York.” His plan would cost $750 billion a year, not $30 trillion, he said.

Harris cited other numbers: $72 billion in profits for pharmaceutical and insurance companies, a figure she understated, and one in four diabetics who cannot afford their insulin. She also claimed millions of seniors go into the Medicare system each day, when the actual figure is about 10,000 people.

The Democrats went at each other as often as they attacked President Donald Trump. One colorful dig against the president came from Sen. Kirsten Gillibrand.

"The first thing that I’m going to do when I’m president is I’m going to Clorox the Oval Office," she joked as she answered a question on climate change.

"You’re dipping into the Kool-Aid"

Sen. Cory Booker of New Jersey and former Vice President Joe Biden clashed over criminal justice — with Booker criticizing crime bills Biden had supported in the past and Biden insisting they failed to represent his current focus on reform. Biden turned to Booker’s record as mayor of Newark, when the ACLU of New Jersey gave him a "D" for police practices in 2009. Booker responded that it was no secret that he had inherited a troubled police department — and a city struggling with violent crime. "There’s a saying in my community," he told Biden. "You’re dipping into the Kool-Aid and you don’t even know the flavor."

Lessons of the Past

Biden said he had never heard Castro "talk about any of this while he was secretary."