Orange County was upgraded Tuesday from the state's purple to red tier, allowing many businesses and churches to reopen at reduced capacity.

Dr. Clayton Chau, the county's chief health officer and director of the Orange County Health Care Agency, is expected to issue a new health order on Tuesday that spells out the details of how businesses can reopen, said Orange County Supervisor Lisa Bartlett.

"We knew we had already met those metrics as of Friday," Bartlett said.

The supervisor said she spent a good deal of time over the holiday weekend helping prepare businesses for reopening.

"I contacted a lot of businesses over Labor Day weekend to get them prepared to rehire staff and getting tables sanitized and (personal protective equipment) in place to pull the trigger when we open today in the red tier," she said. 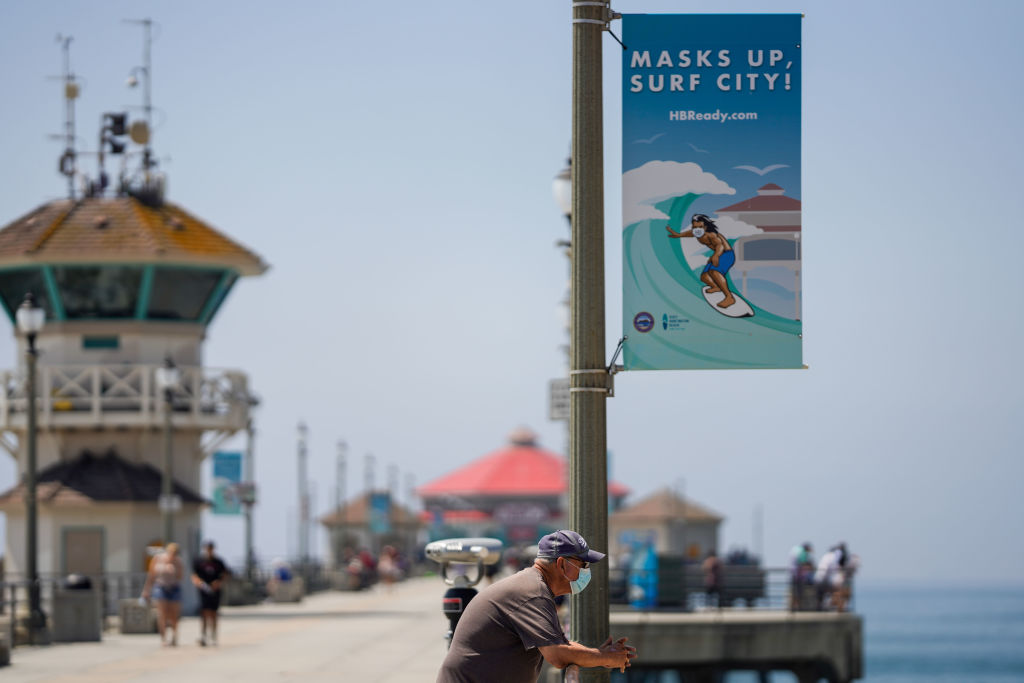 Under the red tier of Gov. Gavin Newsom's four-tier Blueprint for a Safer Economy, the county will be able to reopen movie theaters and restaurants for indoor dining at 25% capacity and churches for indoor worship at 25% capacity.

Shopping centers may expand from 25% capacity to half-capacity under the red tier. Movie theaters can reopen at 10%.

Bartlett said she saw a good deal of compliance with state guidelines for social distancing and face covering usage over the long weekend.

"We had a lot of people out and about over Labor Day weekend, but I did see a lot of compliance with the state public health guidelines, so that was reassuring," Bartlett said.

Orange County CEO Frank Kim said he saw much of the same.

"I did drive by the beaches to see how they were doing and while it did look like a lot of beaches were being utilized, I did see people placing their towels and sun coverings six feet apart, so I thought residents and beach users were using good behavior," Kim said. "I'm not expecting to see a big bump up in terms of (coronavirus) cases."

Kim said the county's contact tracers have noticed far greater threats than outdoor gatherings such as at beaches.

"The greater risk from contact tracing we've found is really in the family gatherings," Kim said.

Extended family get-togethers have been driving up cases, he said.

"In the past this has been an area where the disease transmission has been prevalent, so these types of (gatherings) are more of a concern than people out in the park or beach or in an open-air environment," Kim said.

Kim said he visited South Coast Plaza over the weekend, as well and, "it looked like the stores were managing compliance well; they had attestations posted on the front doors, they were limiting the number of individuals allowed into each store and I thought they were doing a good job."

Orange County reported 113 new COVID-19 cases over the weekend and no additional deaths, bringing the county's cumulative total to 49,845 cases, with 1,053 fatalities.

Case numbers are typically lower over the weekend due to reporting lags, but Monday's relatively low numbers are another encouraging sign as the county hopes to move up from the purple to the red tier of the state's monitoring system by Tuesday.

Los Alamitos Unified School District in Orange County is gearing up for its first day of in person learning since the pandemic began. Toni Guinyard reports for Today in LA at 6 a.m. on Tuesday, Sept. 8, 2020.

Orange County has met the state's metrics for at least two weeks.

Hospitalizations in the county continued to decline, dropping from 253 Sunday to 238 on Monday, while the number of people in intensive care declined from 77 to 75, according to the Orange County Health Care Agency.

The rate of county residents testing positive for COVID-19 was at 5%, which is below the state's desired threshold of 8%.

The OCHCA reported that 700,492 COVID-19 tests have been conducted, including 4,444 reported Monday. There have been 43,597 documented recoveries.

"This significant move to the red tier for Orange County indicates that we are hopefully getting the upper hand on COVID-19," Bartlett said last week. "Our numbers are holding steady or declining, we still have excess capacity in our hospital system and as long as we all continue to follow prescribed health and safety guidelines our trend should keep improving in the county. I look forward to cautiously opening up our local economy so we experience some level of normalcy once again in our day-to-day lives."

The county now meets all of the state's metrics to move up to the state's red tier, up from purple, the worst level.

Individual counties must meet state standards for new cases per 100,000 residents and testing-positivity rates, both over a seven-day average, to move up the ladder of tiers.

But even with the positive trends, the earliest Orange County's schools can reopen for personal instruction is Sept. 22. County officials had argued for credit for time spent off the state's coronavirus watch list before the state switched to the tier system, changing the way it evaluated progress against curbing the spread of coronavirus. However, county officials were told the state did not want to establish a precedent.