Just over a year ago, as the waning seconds ticked off the clock in the Green Bay Packers 37-20 loss to the San Francisco 49ers in the NFC Championship Game, Aaron Rodgers turned to his teammate and said, "I wish we could get one of these at home."

On Saturday, Rodgers got his wish.

The well-rested Packers hosted the Los Angeles Rams at Lambeau Field in the NFC Divisional Round and the presumptive NFL MVP dazzled in a 32-18 victory over the league's top-ranked defense.

Rodgers was 23-for-36 for 296 yards and three touchdowns (one rushing), guaranteeing that this season's NFC Championship game will be held in Green Bay, exactly what Rodgers wanted.

The loss ended the Rams' season, but after missing out on the playoffs in 2019, this year's campaign can still be considered a success.

Los Angeles lost key players last offseason as Todd Gurley, Brandin Cooks, and Cory Littleton all left the team via free agency, release, or trade. There were plenty of question marks regarding the new additions entering the season, but the Rams drafted well, and their rookies made immediate impacts in 2020.

Cam Akers cemented himself as the Rams new workhorse running back for the foreseeable future, and receiver Van Jefferson showed flashes of what could become a special talent at the position.

The Rams limped into their second-round matchup with the Packers. Green Bay, who secured a first-round bye after earning the NFC's number one seed, was the more healthy and rested team and it showed on Saturday.

Rams' starting quarterback Jared Goff was less than three weeks removed from thumb surgery, and played well, despite wearing a glove on his throwing hand throughout the game.

"My job is to win the game," said Goff who also admitted his thumb was not back to normal, but felt good enough to play. "There's absolutely no moral victories in the playoffs."

Two-time NFL Defensive Player of the Year Award winner Aaron Donald played with torn rib cartilage, an injury suffered in the victory over the Seahawks. He missed nearly half the team's snaps on Saturday, and did not look like his usual dominant self in the loss.

The Rams were also without their top wide receiver in Cooper Kupp (knee), and their starting left guard in David Edwards (ankle).

The shorthanded Rams didn't help their own cause either. Two huge first-half penalties cost Los Angeles a first down inside the red zone, and extended a Packers drive that ultimately ended in a touchdown.

The Packers had no problems moving the ball against the Rams number one ranked defense. Green Bay threw for 296 passing yards, 188 rushing yards, and were an efficient 8-for-12 on third down. They scored points on each of their first five possessions.

After a field goal on their opening drive, Rodgers used an audible to get Pro Bowl receiver Davante Adams in motion and away from All-Pro cornerback Jalen Ramsey. Rodgers took the snap and hit Adams in the end zone immediately for the touchdown.

"I’m not some of the dudes you’ve covered," Adams said he told Ramsey before the game. "I just want you come with me. Follow me everywhere. Let’s give people what they came here for."

On their next possession, the Packers started with great field position—thanks to another Rams penalty—and capped off a nine-play, 47-yard drive with a Rodgers rushing touchdown.

The Rams would answer on the ensuing drive when Goff found Jefferson in the end zone for the rookie's first career playoff touchdown.

However, with just 29 seconds left on the clock, Rodgers moved Green Bay into field goal position and stole the momentum back from the Rams.The Packers took a 19-10 lead into the half.

Adversity increased when the Packers opened the second half with a 60-yard run by running back Aaron Jones. The Pro Bowler capped off the opening drive with a one-yard touchdown run.

After forcing the Packers to punt for the first time in the game, the Rams responded with a crucial touchdown drive punctuated by Akers. The rookie out of Florida State lined up in the wildcat position, took the direct snap, and bounced off would-be tacklers for the seven-yard score. The Rams would go for two, and took the Packers by surprise on an all-rookie hook-and-ladder play that saw Goff throw to Jefferson who tossed it back to Akers for one of the best two-point conversion play calls you'll ever see.

The Rams put up a valiant effort, but the Packers finalized their victory with a 58-yard touchdown pass from Rodgers to a wide-open Allen Lazard that put the proverbial nail in the coffin.

The loss crushes the chances for the city of Los Angeles to win three consecutive championships in the same season. The Lakers won their NBA record-tying 17th title on October 11, and the Dodgers followed with their first title in 32 years two weeks later.

Despite their season coming to an end, the Rams still have reasons to hang their heads high. Injuries and inconsistency cost them at various points this year, but there's still plenty of optimism to go around.

The team's two lone Pro-Bowl players—Donald and Ramsey—are signed to long-term contracts. Akers and Jefferson appear to be future stars on offense and will be on their rookie deals for the next few years. If Goff can take a step forward in his play next season, the Rams should be back in the postseason with another shot at a Super Bowl.

"I love this football team," said an emotional McVay. "I love the scars that we were able to respond from. There was a lot of ebbs and flows this year but the men in that locker room I'm very appreciative of." 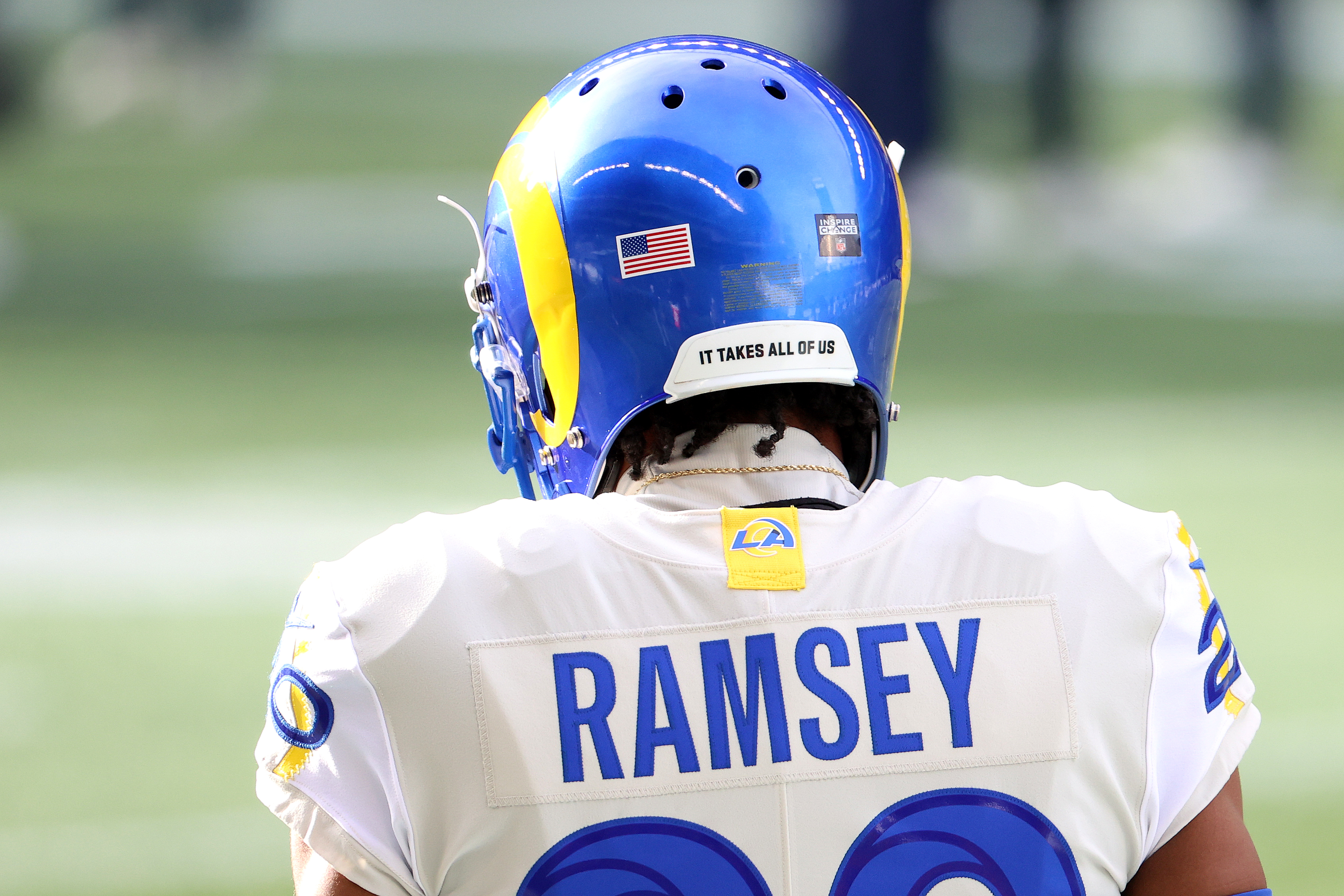 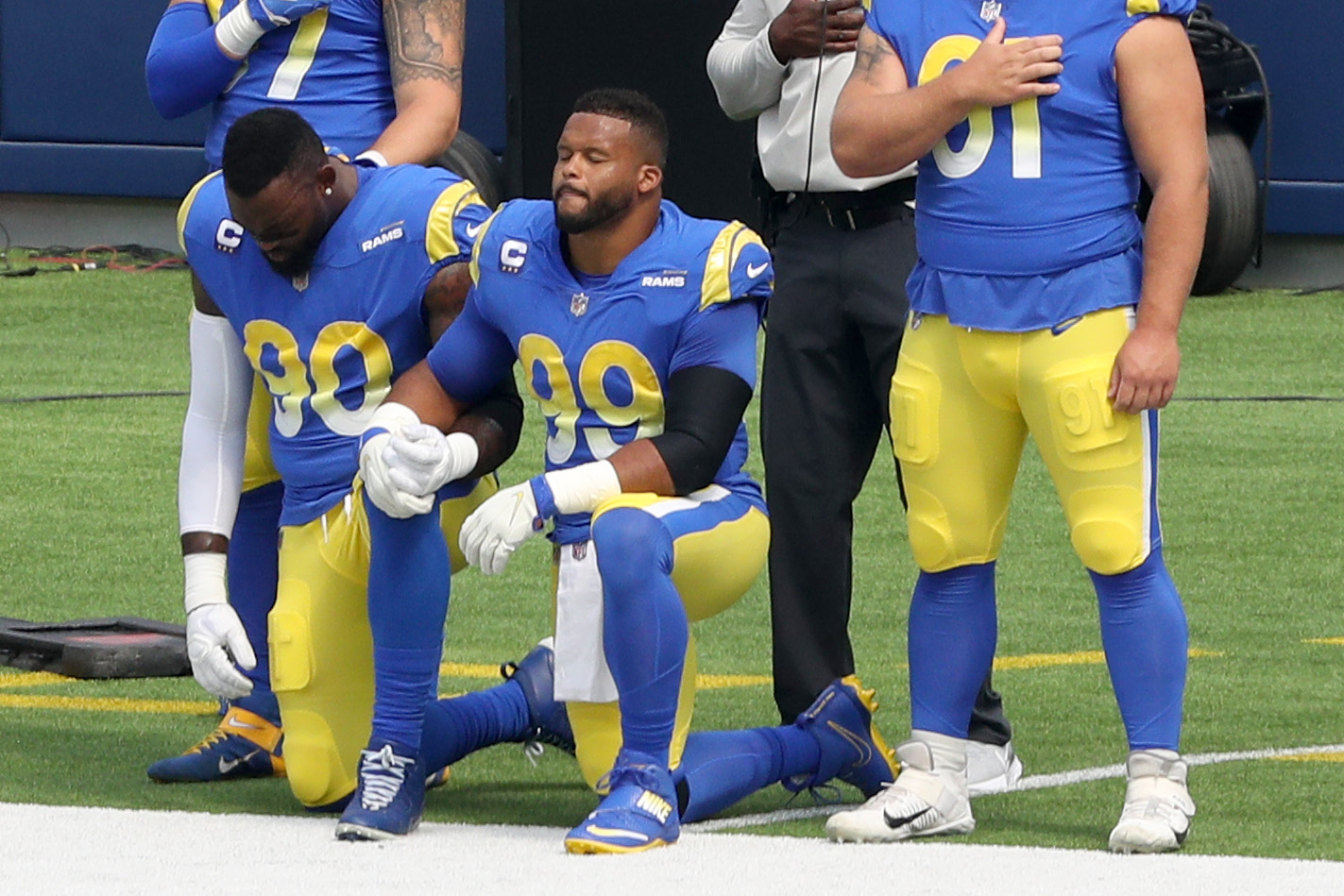 Rams' Aaron Donald and Michael Brockers Are Back Together For Playoffs