Hot dog! The famous frankfurter-serving landmark, seen in movies and promo photos galore, will re-debut in West Hollywood in early 2022.

Let's be frank: Often, quite often, in fact, vintage restaurants and bars disappear from the Los Angeles landscape, never to be seen or heard from again.

Call it the twists and turns of time, if you will, but it can be heartbreaking to those people who hanker for a particular foodstuff, a certain vibe, a singular experience, and the comfort of a classic place they've come to love over the years, or even decades.

Tail o' the Pup, one of the world's best-known shaped-like-the-food-it-serves structures, is a destination that lives large in the hearts and minds of countless Southern Californians.

The Milton Black-designed building, which was fashioned to look like an oversized bun and frank, first opened in 1946. The huge hot dog moved a few times over the years, but plenty of people remember it standing, in all of its 18-feet-by-9-feet glory, at La Cienega and Beverly Boulevards.

After heading to a warehouse in 2005, due to a lost lease, the Pup has remained off-view, its grills cold, its mustard bottles unmustarded, and its notable neon signage dark.

That's all going to change in early 2022, when this fanciful frankfurter reopens in West Hollywood, at 8512 Santa Monica Boulevard.

1933 Group, the hospitality company behind Idle Hour (the barrel-shaped North Hollywood restaurant, another excellent example of novelty or mimetic architecture) and other hip 'n historical eateries and bars, acquired the stand in 2018.

Time spent looking for the ideal location, as well as months given over to gussying up the Pup, has meant that frank fans have had to be patient.

But now that patience is ready to pay off, with the return of a restaurant that not only kept a hot dog-loving public chowing down and filling up over several savory decades, but also served as a vibrant pop culture touchstone for both the city and world.

Tail o' the Pup can be seen in several films, including 1984's "Body Double" and 1991's "LA Story," and it was a must-stop for on-the-rise celebrities seeking the perfect kitschy backdrop for a promo photo (The Go-Go's, DEVO, the Stray Cats, and Sigourney Weaver all paid playful homage to the Pup). 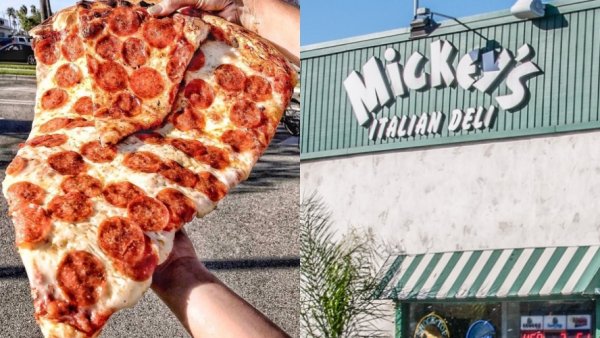 That Ginormous Pizza Slice Is (Briefly) Back at Mickey's Deli

It's hard to believe that this highly photographable favorite has missed the Instagram era, and the rise of social media in general, but one senses it is about to make a fabulous, feed-filling re-entrance.

1933 Group co-owner and lead designer Bobby Green says, "We are reveling in the charm of nostalgia with the return of Tail o’ the Pup. I can't think of a better way to put a smile on another’s face than to bring back the whimsical, giant hot dog stand that people would go out of their way to see as much as they would search for the Hollywood Sign."

"We are honored to rescue one of America's most iconic roadside attractions and hope that people see this comeback as another love letter we've written to Los Angeles."

Raise your squeezy bottles of mustard on high: A local legend is returning, in all of its picture-worthy, sizzle-savory glory, in early 2022.