WASHINGTON — The clock is ticking this week on President Joe Biden's goal of reaching an agreement with congressional Republicans to support some, if not all, of his wide-ranging infrastructure proposal.

After weeks of outreach by White House aides to lawmakers on Capitol Hill, the president is holding high-profile meetings this week with influential senators, both Republicans and Democrats, whose input could shape the outlines of any final bill. 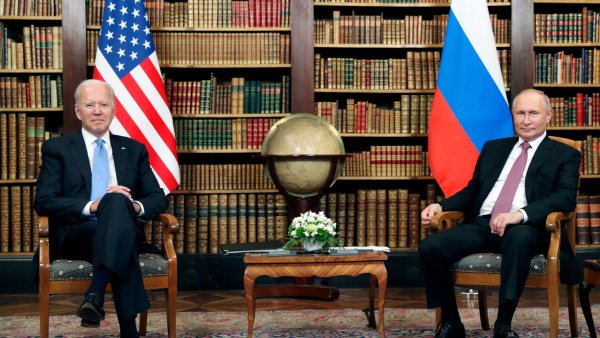 Op-Ed: In Europe, Biden Laid the Foundations for an Alliance to Preserve Democracy and Check Authoritarians 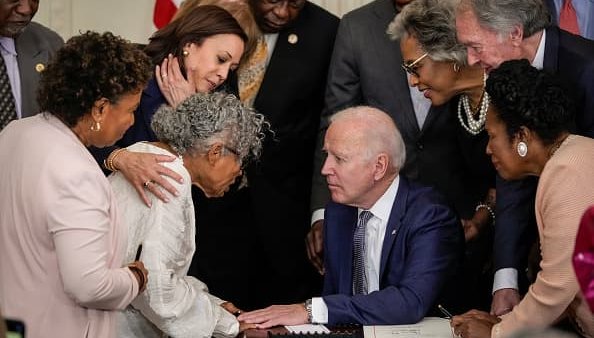 Under Trump, Juneteenth Was Marred by Controversy — With Biden, It's a Federal Holiday

There are a number of reasons to be cautiously optimistic that Biden can reach an agreement with Republicans, especially if he agrees to split the massive $1.8 trillion American Jobs Plan package into two or more separate bills.

But with each passing day, the partisan divide grows deeper over how to pay for the much-needed infrastructure investments.

Democrats have so far rejected a Republican proposal to fund the plan through user fees, with White House officials saying this amounts to a tax hike on middle-class Americans who drive.

Instead, Democrats propose raising the corporate tax rate and closing loopholes that would effectively mean corporations and the very richest Americans pay for the plan.

But Republicans say any changes to the low tax rates enacted in their 2017 tax-cut bill are a nonstarter.

So where does that leave the prospects of a bipartisan bill?

Advocates and analysts on both sides of the aisle agree: Right now, there are no visible areas of overlap between the Democratic and Republican funding plans.

Under any other president, this would render any hopes of a compromise bill effectively DOA. But with Biden in charge, they say, the math is different.

"We've never had a president spend this much time and political capital on infrastructure," said Kevin DeGood, who leads the infrastructure policy team at the progressive Center for American Progress.

"I'm cautiously optimistic about a compromise bill because it's a personal priority of the president's," said Republican strategist Michael Steel, a partner at Hamilton Place Strategies and a former top aide to then-House Speaker John Boehner, R-Ohio.

On Monday, White House press secretary Jen Psaki reaffirmed that the search for a bipartisan compromise is coming directly from Biden himself.

"He is quite open, as is evidenced by the fact that he invited Sen. [Shelley Moore] Capito and a group of members to meet with him in the White House later this week. He's very open to having a discussion about it: where we can find agreement, where we can move forward."

Biden will then meet with six Republican senators, including Capito, to talk about a potential compromise on Thursday. Capito, a Republican from West Virginia, led a $568 billion GOP infrastructure proposal last month.

Still, there are doubts that Biden's enthusiasm for a deal can paper over the deep divisions between the two parties' priorities.

"The two sides are still extremely far apart, not only on the topline spending but also on the guts of the respective plans and what they're trying to achieve," DeGood told CNBC.

Biden's proposal features hundreds of billions of dollars in funding for traditional infrastructure projects, such as roads and bridge repair.

But it also includes billions more in spending to expand the electrical grid, bolster care for elderly and disabled Americans, invest in affordable housing and expand broadband access.

And Biden so far refuses to agree to any funding for the plan that would contribute to the federal deficit, insisting that any provisions in a bill be paid for upfront.

Republicans have seized on Biden's expansive definition of "infrastructure" to oppose much of his proposal. In April, Republican senators released the framework of a counteroffer infrastructure bill that would cost about a quarter of what Biden is proposing.

Republicans also say that Biden's refusal to fund the plan by imposing user fees, or deficit spend, is unsustainable.

"I don't understand why infrastructure needs to be paid for within the bill," said Steel, the Republican strategist.

"With low interest rates right now, why should it be verboten to make these improvements that will grow the economy, and to finance it with some spending?" he said.

As for the Democratic proposal to raise the corporate tax rate, Steel said Republicans are united in their opposition.

"I don't see tax hikes. At all. And Republicans are going to see closing any tax loopholes as a tax hike," he said.

As negotiations continue this week, Biden has said he has only two red lines: inaction, and tax hikes on people making less than $400,000.

But many rank-and-file Democrats are suspicious of the motives of their GOP colleagues.

"Dealing with infrastructure and the Republicans always feels like Lucy and the football to me, with Charlie Brown. Every time we get close, they kind of pull the football away," Rep. Mikie Sherrill, D-N.J., said Monday on MSNBC.

Sherrill also noted that her concern "has less to do with the top line [funding] number, and more to do with what's in the package."

The longer the negotiations continue, the greater the chances that unrelated events will shift Biden's hand one way or another.

April's disappointing jobs numbers, which came out Friday, served to bolster the administration's case in recent days for why a sweeping job creation bill is needed right now.

According to DeGood at the Center for American Progress, April's sluggish job growth gives Democrats "even more impetus to stick with this fight, because this is their signature domestic job creation bill."

Biden has previously said that 75% of the jobs his American Jobs Plan would create are for people who have only a high school diploma.

Also impacting the public debate over infrastructure this week is the news that one of America's largest energy pipeline operators, Colonial Pipeline, has been crippled by a ransomware cyberattack.

On Monday, Transportation Secretary Pete Buttigieg told CNBC the attack highlights the unique vulnerabilities of our current infrastructure and why it needs to be shored up.

"Twentieth-century infrastructure is going to be especially vulnerable, and it's why we need to be planning to future-proof the assets that we have around the country," said Buttigieg.

Biden has set an unofficial deadline of Memorial Day for reaching a deal with Republicans.

If Biden fails to reach a bipartisan compromise on the plan, he and congressional Democrats have said they will use budget reconciliation to pass an infrastructure package on a purely party-line vote, which requires only 51 votes in the Senate.