The Apple Fire grew to more than 26,500 acres after starting Friday in Riverside County.

One firefighter was injured and 12 structures have been destroyed in a nearly 27,000-acre wildfire burning in Riverside and San Bernardino counties.

Details about the injury and buildings were not immediately available.

The Apple Fire was 15-percent contained Tuesday morning after burning 26,850 acres. Cooler conditions Tuesday and throughout the rest of the week are expected to aid firefighters, but wind will still be a threat.

Smoke drifting throughout the region is causing poor air quality.

A malfunctioning vehicle was leaking burning matter from its exhaust pipe, triggering three separate blazes that eventually merged into one about 5 p.m. Friday in the area of Apple Tree Lane and Oak Glen Road.

“The determination is reinforced by multiple independent witnesses, as well as supporting physical evidence,'' according to a Riverside County Fire Department statement. “Officers are seeking information from anyone who may have seen a vehicle which appeared to have mechanical problems, or unusual smoke emitting from it. If you were driving on Oak Glen Road at the time the fires were small, Cal Fire peace officers want to talk to you.''

Anyone with information was urged to call the Cal Fire hotline at 800-633-2836. Callers may remain anonymous.

There had been unverified reports of a man walking along the roadway, igniting fires amid dry and brittle conditions and triple-digit heat, but Cal Fire debunked those rumors and said black soot belching from a diesel exhaust pipe sparked the fire.

“Diesel vehicles shoot out that black soot,'' Cal Fire Capt. Fernando Herrera told the Press Enterprise. ``When that is shooting out, it does form some small particles, they can be from a pebble size, even up to a quarter size. And as those are emitted through the exhaust they are extremely hot, so when they land on any type of dry fuel, it will ignite.''

The head of the Apple Fire is on a mountainside in San Bernardino County, according to the U.S. Forest Service. Two Cal Fire air tankers and 12 water-dropping helicopters were working to establish containment boundaries, as more than 2,500 personnel on the ground gradually attempted to encircle the brusher. As the fire burns into the wilderness, vegetation is becoming sparse, helping to limit the fire’s intensity.

Gov. Gavin Newsom announced the state will receive a Fire Management Assistance Grant from the Federal Emergency Management Agency to help ensure resources will be available to fight the brush fire. The grant will also allow local, state and tribal agencies responding to the fire to apply for 75% reimbursement of their eligible costs, the governor said.

Evacuations were in place in both Riverside and San Bernardino counties. An emergency closure order was put in place Sunday prohibiting all entry into the San Gorgonio Wilderness Area, including the Pacific Crest Hiking Trail between the Forest Boundary and Forest Road 1N01.

Residents north of Wilson Street, east of Sunset Avenue and west of Hathaway Street in Banning, were ordered to evacuate at 2:15 p.m. Saturday as flames crept toward the neighborhood, according to the Riverside County.

Emergency Management Department. At 7 that night, residents were put on notice they should be prepared to evacuate from the area north of Morongo Road east of Millard Canyon Road, west of Whitewater Canyon Road. 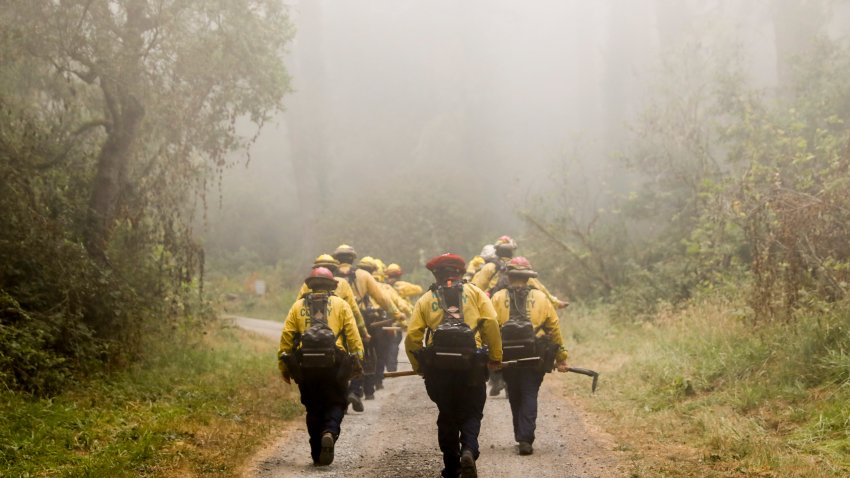 Under evacuation orders since Friday were residents in the Banning Bench area, and those north of Cherry Valley Boulevard between Beaumont and Highland Springs avenues, according to the Riverside County Fire Department.

Officials estimated that 2,600 residences and 7,800 people have been evacuated and said they do not have a time frame for lifting the evacuations.

A temporary evacuation center was established at Beaumont High School, 39139 Cherry Valley Blvd. The American Red Cross was additionally assisting evacuees by putting them in hotels.

Riverside County residents were encouraged to visit this website for an interactive map, where they can enter their address and see if they are in an evacuation area.