Although Solis initially said vaccine would be made available to people 65 and older beginning Thursday, officials said those appointments will actually begin Wednesday.

County Public Health Director Barbara Ferrer said there are adequate vaccine supplies to get through this week's appointments -- about 50,000 of them at the public sites -- but the county has no idea how many more doses it'll be getting next week. 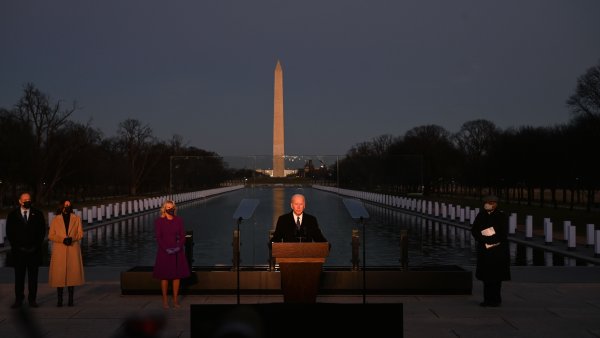 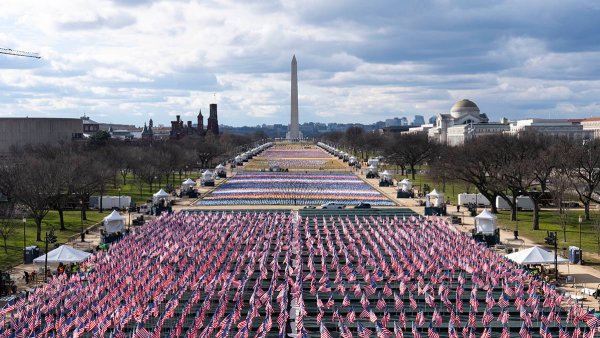 Here Are Some of the Traditions You'll See at Biden's Inauguration

Ferrer and County Supervisor Hilda Solis both pinned their hopes on
Wednesday's inauguration of President-elect Joe Biden, saying the outgoing
Donald Trump administration has been less-than-transparent about vaccine
distribution.

"Tomorrow, the new federal administration takes over, and we expect our situation to improve greatly," Solis said.

According to Ferrer, as of the end of last week, the county had received 685,000 vaccine doses, and more than 70% of them have been administered. The county is expected to receive a total of 168,000 doses Tuesday and Wednesday of this week.

Solis on Monday night announced that she had signed an executive order making COVID-19 shots available to residents 65 and older. The announcement marked a major policy shift, since Ferrer and other health officials have insisted previously that the county needs to finish inoculating health care workers before offering limited vaccine supplies to members of the general public.

Ferrer on Tuesday downplayed any perceived internal conflict or difference of opinion, saying she did not consider Solis' executive order to be an ``overruling of the Public Health Department.'' Ferrer said the county has made tremendous progress in getting health care workers vaccinated, and she acknowledged the need to vaccinate older residents -- who are at higher risk of severe illness and death from COVID-19 -- even amid scarce vaccine supplies.

"It's always hard when you're operating in scarcity, but I do appreciate the need for us to be mindful of moving forward as quickly as we can to get those at high risk, and I think that's what the strategy has allowed us to do,'' she said.

Although Solis initially said vaccine would be made available to people 65 and older beginning Thursday, officials said those appointments will actually begin Wednesday.

People who want to schedule appointments can do so online at vaccinateLAcounty.com. People without a computer or internet can call 833-540-0473 to make appointments. Officials urged people to use the online system as much as possible, because there will likely be long waits on the phone line.

But the demand for the vaccine apparently outpaced the online appointment system's ability to handle the load. Not long after county officials formally announced the appointment website Tuesday afternoon, it crashed. County officials announced on Twitter that the website and the hotline were "fielding thousands of calls and users, and experiencing technical difficulties."

Some web users reported they were unable to access the system at all. Others received a message that the site was undergoing maintenance, while others were able to start the process only to be kicked out of the system and forced to start over.

County officials said they were working to resolve the issues.

While many jurisdictions, including Orange County and the city of Long Beach, quickly began offering shots to older residents, Los Angeles County resisted, saying it still had about 500,000 health care workers who needed to be inoculated.

But with progress being made on that front, Solis said it was critical to begin offering shots to vulnerable older residents.

"... This is about equity,'' she said. ``Older adults have been unfairly impacted by the virus. They've stayed home for months, isolated, which is as you know a problem in and of itself. But the COVID-19 vaccine is here. Hope is here. Our residents will soon be able to return to a life where they can visit their grandchildren, go on walks with friends, volunteer at a local soup kitchen and even come to the LA County Fair at the Fairplex once we are
back to normal."

Concerns about the availability of vaccine were exacerbated this week when the state's epidemiologist warned providers to stop administering doses from a batch of 330,000 Moderna vaccines in response to allergic reactions suffered by a handful of people in San Diego.

"A higher-than-usual number of possible allergic reactions were reported with a specific lot of Moderna vaccine administered at one community vaccination clinic,'' state Epidemiologist Dr. Erica S. Pan said in a statement late Sunday. "Fewer than 10 individuals required medical attention over the span of 24 hours. Out of an extreme abundance of caution and also recognizing the extremely limited supply of vaccine, we are recommending that providers use other available vaccine inventory and pause the administration of vaccines from Moderna Lot 041L20A until the investigation by the CDC, FDA, Moderna and the state is complete. We will provide an update as we learn more.''

Those 330,000 doses of Moderna vaccine no longer available represent 10% of all the vaccines received by the state thus far -- dealing a blow to counties like Los Angeles that have been requesting more vaccine allocations to keep up with demand.

Los Angeles County opened five large-scale vaccine sites Tuesday -- at Six Flags Magic Mountain, Cal State Northridge, the Pomona Fairplex, the LA County Office of Education in Downey and the Forum in Inglewood. The sites will eventually have the capability to vaccinate 4,000 people each on a daily basis -- depending on vaccine availability.