Some Undocumented Children Will Face Judge Without Legal Help

With or without protestors turning away buses, Murrieta is only a way station on a journey through US immigration enforcement for the undocumented individuals on board, many of them Central American children seeking asylum.

Murrieta was designated as a processing point for thousands of migrants orginally detained in Texas, resources there becoming overwhelmed. Where the migrants will be moved next,  US Customs and Border Protection has not disclosed.
Immigration attorneys expect many will be be brought to Los Angeles for proceedings in Immigration Court. Initially, the children would be placed in shelters provided by the Federal Department of Health and Human Services.
Apart from those moved from Texas, more migrant children have already been brought to federal shelters in Los Angeles this year, according to Lindsay Toczylowski, directing attorney of the 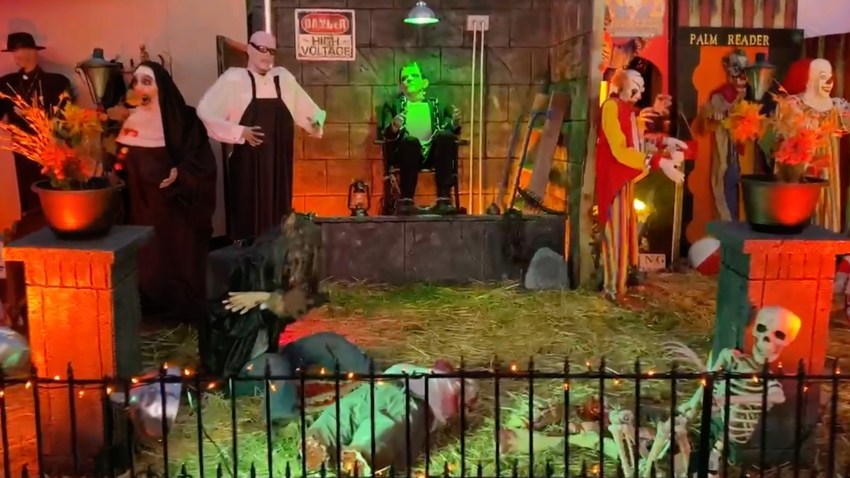 Halloween in Torrance is Not Dead. Check Out This Decked Out Home

Esperanza Immigrant Rights Project.
"Since January, this agency has interviewed more than 1,000 minors," said Toczylowski.
From last October through June 15, about 706 "unaccompanied" undocumented children from Central America have been apprehended in Border Patrol's San Diego sector, according to the Department of Homeland Security, up from 439 during the previous time period.
Those numbers pale in comparison to what has been happening on the Texas side of the Rio Grande.
During fiscal year 2013, 13,532 undocumented unaccompanied children were detained in the Rio Grande sector.  In one year that increased to 37,621.
From her experience, Toczylowski expects many of the Central American children will seek asylum, based on conditions and and dangers in Honduras, Guatemala, and El Salvador.
It is a process that typically moves forward slowly.
"We've seen backlogs of two to three years, even before this surge," Toczylowski said.
During the deportation challenge, in many cases, family members or other "sponsors" step
forward to take custody of the children.  Those on their own are usually placed in foster homes, and
often do not have access to legal advice or representation,
In immigration court -- unlike criminal court -- there is no right to have a government-appointed attorney at no cost, not even for children on their own.
In some cases, children as young as 5 years have had to face an immigration judge asking questions to try to draw out information.
"It's pretty dire to watch," Toczylowski said.
The Esperanza Project was launched by Catholic Charities a decade ago to provide free legal assistance to children facing deportation.
The Project's 16 attorneys go to the shelters twice a week to offer counsel to the children, Toczylowski said.  The Project provides ongoing representation to children who are on their own.
Since last fall, legal assistance for children has also been available through "KIND," or Kids in Need of Defense, founded by actress and activist Angeline Jolie and the Microsoft Corporation. KIND has two coordinating attorneys in Los Angeles.
Last month, the Department of Justice announced a plan for $2 million in grants to fund legal aid for children facing deportation.  The one-year pilot program is a collaboration with the AmeriCorps national service program, and intended to enroll some 100 attorneys and paralegals.
It's expected the grants will be awarded by fall, but with training, the legal assistance may not become available until late this year or early next, according to AmeriCorps spokeswoman Samantha Jo Warfield.
Congress is considering a bill that would require the government to provide legal representation to children facing deportation.
The Obama Administration has announced it will provide additional resources for dealing with what it has termed a "humanitarian crisis."
The Administration is also asking Congress to amend a 2008 law that imposed restrictions on so-called "expedited" deportations that do not go before a judge.  Under the currrent law, expedited deportation is permitted only to the neighboring countries of Canada or Mexico, but not Central America.
Even with the surge of detained children, the majority of deportation cases involve adults, and it is not clear how long it will take to resolve the cases of those being brought to California.
Providing shelter and care for all the apprehended undocumented children being transferred to California may prove the most difficult challenge, in Toczylowski's view.
0