Woman Who Led Bizarre Chase in RV Charged With 9 Felonies, Including Animal Cruelty

A woman accused of leading law enforcement on a bizarre chase in a motorhome from the Santa Clarita area to Tarzana -- with two dogs inside the RV -- was charged Thursday with nine felonies, including animal cruelty.

Julie Ann Rainbird, who is also known as Julie Ann Fehlman, 52, was charged with felling a pursuing police officer causing serious bodily injury, hit-and-run driving resulting in serious injury, animal cruelty and three counts each of assault with a deadly weapon -- the RV -- and hit-and-run resulting in injury to another person.

Rainbird pleaded not guilty to the charges during a Thursday afternoon court appearance in San Fernando. She is due back in court June 3.

The chase began about 7:05 p.m. Tuesday in the Towsley Canyon area, according to the Los Angeles County Sheriff's Department.

Rainbird drove on freeways and then city streets before the pursuit ended in a crash about 7:35 p.m. near the intersection of Tampa Avenue and Wells Drive. Along the way, the suspect ran red lights and at times drove on the wrong side of the street, at one point broadsiding a car in the area of

Tampa Avenue and Ventura Boulevard and narrowly missing others. 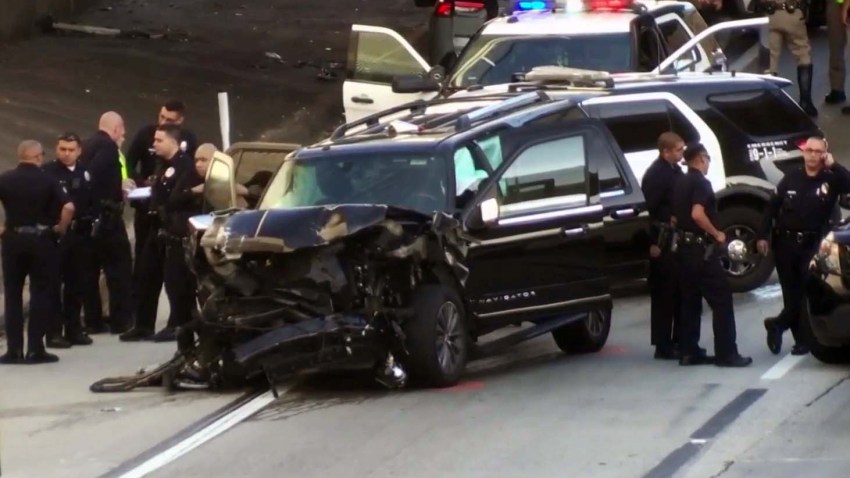 The suspect, at times with the two dogs on her lap, also drove through a parking lot where the motorhome slammed into a palm tree, tearing away the front and right side of the vehicle and causing its windshield to fly away.

The speeding motorhome, with debris flying out and liquid spilling onto the road as the suspect maneuvered wildly, also struck some parked vehicles and pushed others out of its path.

One of the dogs jumped or fell from the vehicle through the gap where the windshield had been and ran off during the chase.

After the final crash, which seriously injured a motorist who was backing out of a driveway, the suspect tried to run from officers with the second dog following, but she was quickly caught and cuffed, blood pouring from her face.

Both dogs were corralled by officers and placed in the custody of Los Angeles Animal Services with non-life-threatening injuries.

The motorhome had been reported stolen out of Simi Valley, according to the sheriff's department.

Rainbird faces more than 14 years in prison if convicted, prosecutors said. She remains jailed on $395,000 bail.