Those flags were placed on overpasses to honor the 13 service members who were recently killed in Afghanistan.

The flags were placed on overpasses to honor the 13 service members who were recently killed in Afghanistan during an evacuation at the airport in Kabul. The community is now responding by buying more flags.

The flags hanging right now at the 14th Street overpass were placed there by the Greater Riverside Chambers of Commerce. Vice president Nicholas Adcock helped put up the 13 American flags and also a US Marine Corps flag. 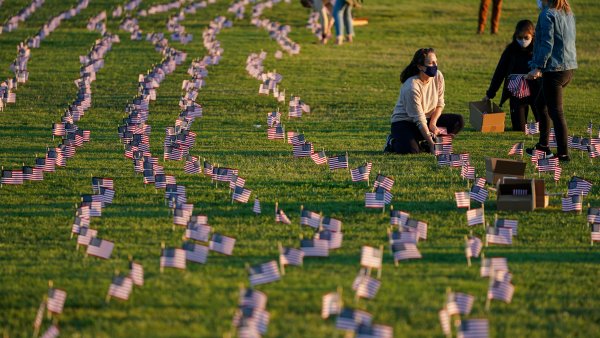 “We were inspired by the local resident who put up that initially. They put the flags up on the Ivy Street Bridge,” he said.

That's where a resident hung 13 American flags honoring the sacrifice of the 13 US service members who were killed last month during the withdrawal from Afghanistan. There was also a US Marine Corps flag, but all of them were vandalized over Labor Day weekend.

In response, another family replaced the 13 American flags, which inspired others to place 13 more flags on the fence across Ivy Street.

But just hours later, someone ripped down all 26 flags, and Riverside police say that same vandal may have also stolen the Marine flag on the 14th Street overpass.

Officer Ryan Railsback said whoever is committing these crimes could face felony charges and jail time.

“Whoever is doing the damage, stealing them, they just don't realize that this isn't about the flag. It's about what that represents to these 13 lost heroes, 13 families that are suffering," he said.

He also says if the goal of the vandalism is to divide our country even more, it appears to be having the opposite effect.

"I think this is uniting people," he added.

Workers certainly agree over at Jon's Flags and Poles.

They have been busy with customers who want to honor the 20-year anniversary of 9/11, but many people are also buying American flags in direct response to the vandalism and thefts.