An 11-month-old baby boy was safe and reunited with his mother Tuesday evening after the car he was in was stolen in the Van Nuys area.

The woman accused of taking the car with the baby inside was identified as  Maria Elizabeth Dela-Torre, according to police. She had not yet turned herself in as of Tuesday evening.

The search began for the baby boy after the white 2001 Infiniti G20 sedan he was in was reported stolen at about 10 a.m. in the 18400 block of Gault Street, police said.

Police asked for the public's help in find the vehicle, issuing a picture of the baby and the car's license plate.

Several patrol vehicles were in the neighborhood where the theft was reported. The baby, Leo, was in the Infiniti when it was left unattended with the engine running. The boy's mother left the child in the car and went to get her other child upstairs from the babysitter, Capt. Billy Brockway said at a news conference.

"I was just praying and hoping for the best, and that God would find him," the boy's mother, only identified as Paula, said.

About two hours after the search began, a plumbing crew saw a child in a car alone with the windows down in the 15000 block of Enadia Way around noon.

They said they thought it was odd that the baby was alone, so they called 911.

Officers dispatched to the check out the car arrived moments later and rescued Leo.

The child was allegedly left in the car for several hours according to witness reports, Det. Manny Martinez said.

Leo was checked by doctors and given the all-clear before he was reunited with his mother.

The woman accused of taking the car, later identified as Dela-Torre, is known in the area, police said. This is how residents were able to help in identifying the woman so quickly. 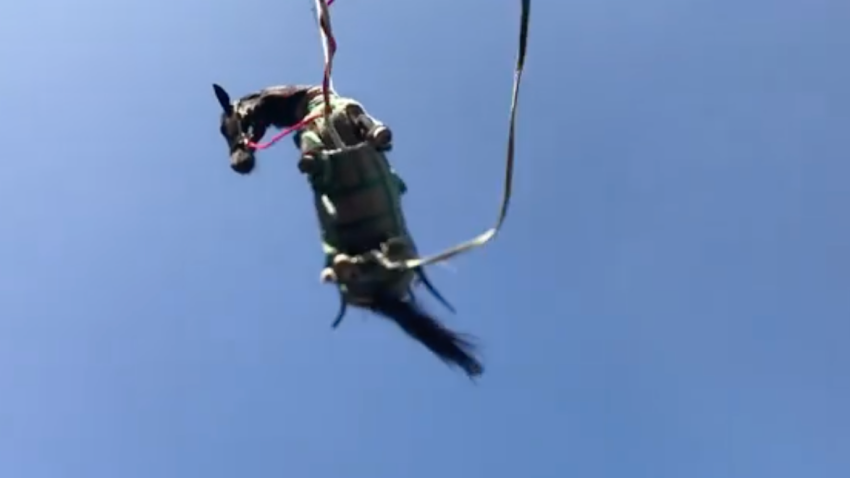 Police said she has a rap sheet, including prior arrests for narcotics and domestic violence. Police said she apparently got in a fight with her boyfriend Tuesday morning, saw the parked car with the engine on, and just hopped in.

Detectives contacted her earlier in the day and she agreed to turn herself in, but then stopped answering her phone.

Earlier Tuesday, a car with a 5-year-old boy sleeping inside was stolen in the Riverside area. Police found the abandoned car about 15 minutes later with the boy, who was not injured, still inside.