In an interview first played in court at a June 2017 hearing, Michael Mejia admitted being a gang member and drug user and told the detectives, "I did it, I mean, I did it ... both of 'em, all three of them had it coming."

A gang member convicted of opening fire on two Whittier police officers, killing one and wounding the other, along with killing a man in East Los Angeles earlier the same morning, was sentenced Wednesday to life in prison without the possibility of parole.

Michael Christopher Mejia, 30, was found guilty Sept. 1 of two counts of first-degree murder and one count each of attempted murder, carjacking and possession of a firearm by a felon. 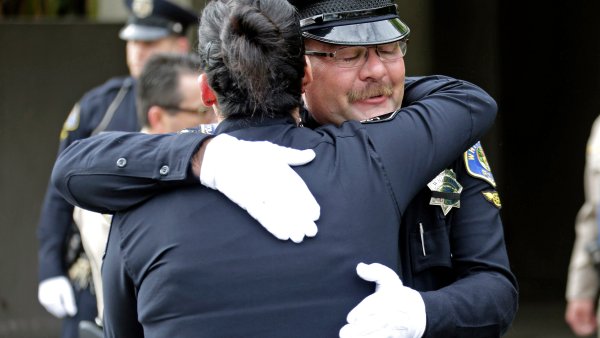 Mejia was convicted for the Feb. 20, 2017, killings of Keith Boyer, a 53-year-old Whittier police officer who was the first officer in the city killed in the line of duty in 37 years, and 47-year-old Roy Torres.

Mejia told authorities after his arrest that Torres was his cousin, but Torres' relatives insisted that he was not related to Mejia.

The attempted murder count involved then-Whittier police Officer Patrick Hazell, who was shot in the abdomen.

Whittier Police Chief Aviv Bar, in uniform at the courthouse for Wednesday's sentencing, said, "The savage execution of Officer Keith Boyer'' and the attempted murder of Hazell ``has changed our department forever.''

Over the objection of the two prosecutors in the trial, the District Attorney's Office dropped its bid to seek the death penalty against Mejia in February. The reversal came just over two months after District Attorney George Gascon was sworn into office.

Whittier residents lined the streets leading up to the cemetery to honor one of their own, fallen officer Keith Boyer. John Cádiz Klemack reports for the NBC4 News at 5 on Friday, March 3, 2017.

Gascon -- who said he had a "mandate from the public'' -- has vowed that the office will no longer pursue the death penalty.

Whittier Police Chief Aviv Bar opposed the decision by the District Attorney's Office and had spoken against it at a Feb. 18 hearing in which he asked for all of the applicable charges and penalties to remain in place.

"... If you sat through the proceedings and if you listened to the facts, if you listened to the suspect himself speak about killing Keith and trying to kill Patrick ... just the savagery of that act, I can't think of any other circumstance that would not qualify this for a death penalty case and the removal before the trial was wrong and unfortunate, very unfortunate,'' the police chief told City News Service outside court after the verdict was read.

"This is arbitrary because if this happened in Orange County, San Bernardino County, Riverside County, Ventura, San Diego, this would be a death penalty case,'' Bar added. "It's very dangerous when you send that message in the county that if you savagely execute a police officer in this county you're not going to face the death penalty.''

Boyer's stepfather, Don Clark, said he was "not real happy'' with Gascon's directive to pull the death penalty in all pending cases.

"Because of one man's decision, it was changed and I don't think that's right. It hurt a lot of families,'' he said.

The officer's aunt, Susan Reeder, said the family was "elated'' with the verdict, but added, "Our only regret was that the death penalty was taken off the table.''

In his closing argument, Deputy District Attorney Garrett Dameron urged jurors to hold Mejia "accountable for the ruthless, inhumane killer he is.''

The prosecutor said the two police officers were responding to a three-vehicle traffic collision near Colima Road and Mar Vista Street in which Mejia had been involved, and that the two had no idea that those would be "the last moments'' of Boyer's life.

Dameron called the evidence "so strong,'' telling jurors there was "clear intent to kill the victims in this case'' and an "abundance of evidence'' that Mejia premeditated the shootings.

The deputy district attorney told jurors that Mejia committed the crimes "to get attention'' and wanted his face shown on the evening newscasts.

Mejia's attorney urged the panel to find his client guilty of the lesser crime of second-degree murder for the killings. Defense lawyer Paul Cohen argued there is "no indication that he (Mejia) planned these crimes ahead of time.''

Cohen told jurors there shouldn't be any doubt that Mejia was using drugs in the days leading up to the crimes, saying that voluntary intoxication is "key to this case.''

"It was all about drugs and getting high,'' Mejia's lawyer said.

The defense attorney said his client "wasn't a career criminal'' and disputed whether his client was even an active gang member at the time.

In his rebuttal argument, Deputy District Attorney Geoff Lewin said the "most damaging evidence'' came from the defendant himself, whom he said "admits to everything essentially.''

The prosecutor countered that there was no evidence of a methamphetamine-induced psychosis in which Mejia didn't know what he was doing at the time of the crimes.

Lewin concluded his rebuttal argument by playing an audio recording of Mejia telling investigators when asked if he had anything to say to the Whittier Police Department that they should "train your guys better'' and that he didn't feel sorry.

During the 48-minute interview in a hospital jail ward eight days after the killings, Mejia initially told sheriff's Detectives Dean Camarillo and Omar Miranda about the killings, "I don't remember doing none of that.''

But he later told the detectives, "I guess you guys have everything down -- smoked my cousin, smoked the cop. ... I mean, what else do you guys want? I shot another cop ... He shot me,'' Mejia said during that interview.

In the interview first played in court at a June 2017 hearing in which he was ordered to stand trial, Mejia admitted being a gang member and drug user and told the detectives, "I did it, I mean, I did it ... both of 'em, all three of them had it coming,'' adding that the "officer got too aggressive with me.''

When asked by homicide investigators about what happened with Torres, the defendant said that the victim -- whom he described as a "cool cousin" from his grandfather's side -- should have "kept his nose clean'' and that he had "warned him.''

Outside court after the verdict, one of Torres' cousins, Tiffany Garcia, described Mejia as "an animal'' who had "no remorse.''