It's OK not to have all the answers. It's important to have the conversation

For many parents, talking to their children about the nationwide protests following the death of George Floyd may seem daunting. Racism, police brutality and civil disobedience are big topics that some parents might feel afraid to broach. Yet experts say it is essential to address them.

“Not talking about it sends a message that maybe what (children are) feeling isn’t right,” Dr. Jacqueline Dougé, a Maryland pediatrician and an author of the American Academy of Pediatrics (AAP) policy statement The Impact of Racism on Child and Adolescent Health, told TODAY Parents. “It also sends a message when it comes time to deal with hard conversations and hard issues … that perception that child has is, ‘I'm not going to be able to open up my (parents).'”

What's more, parents need to help their children navigate an overwhelming reality and doing so in a transparent way bolsters the child-parent relationship.

"Children are looking to their parents to filter the world for them. It's their parents' responsibility to make sense of the world — and the world can be a big and scary place without somebody to help," Dr. Nia Heard-Garris, chair of the AAP section on minority health, equity and inclusion, told TODAY Parents. "To have a long lasting and enduring, nurturing relationship with your kids being honest is really important."

Sometimes parents shy away from a topic because they might not understand it well. But admitting to not knowing shows kids that parents are human — and are willing to look for an answer. The AAP, the American Psychological Association and Embrace Race all have talking points for parents to discuss race, for example. ‘Tonight': Kareem Abdul-Jabbar on His Lifelong Fight Against Racism 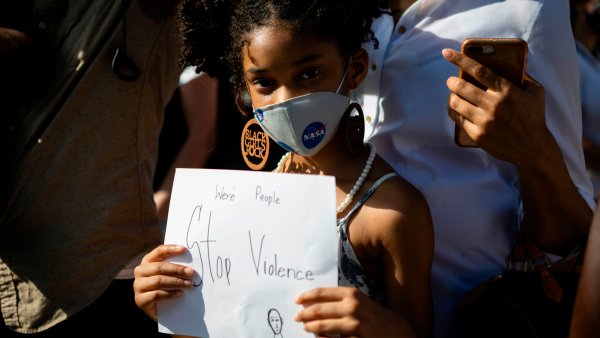 How to Talk to Kids About Race and Racism

“It is OK not to know how to talk about (a topic) and not exactly know what to say,” Dougé said.

And, parents should trust that they get their kids and their needs.

"We're the experts of out children. No one knows our children better than we do," Heard-Garris said. "We're experts in knowing how much they can handle, when is the right time to talk."

But being silent can give children unrealistic views.

“If we brush it under the carpet … the message we are giving to our children is racism doesn’t exist, races don’t exist,” Annette Nunez, a psychotherapist in private practice in Denver, told TODAY Parents. “Racism does exist … it’s really important to talk about it.”

Dougé, Heard-Garris and Nunez shared ways to talk to children about the protests, Floyd's death and racism.

Research indicates that even toddlers notice racial differences, so kids are picking up on it way before many parents even think about it. With younger children, books and toys can be good tools to help recognize and celebrate differences. Heard-Garris recommends "Not My Idea: A Book about Whiteness" and "Something Happened in Our Town."

To talk about racism and the protests with kids this age, Nunez suggests using the concept of fairness because little children understand this.

“Explain it in terms with experience that they've had. So maybe you talk about the time their brother got something and they didn't. Start explaining the concept of inequality and then to relating it to the protests,” Nunez said.

This should be one of many chats about race, racism and protesting injustices.

"Talking about this early and often is really important," Heard-Garris said. "It's an ongoing conversation. It should not be a one off."

When it comes to older children, parents can talk more specifically about what their children have heard or watched.

“Then parents can say, ‘Let's talk a little bit more about your thoughts about that,’” Dougé said. “We’ve got to talk about it with them to validate their feelings.”

“They need to know they are being heard and have a safe area to process these feelings and ask a question,” Nunez said.

As children get older the conversations will be more advanced, but it is still important for parents to keep an open mind. Parents should encourage middle school children to ask questions.

Dougé says it’s important for parents to watch media with their children or simply talk about what they’re watching.

“Let them, perhaps, direct the conversation,” she said. “There's also an opportunity if your son or daughter is telling you about this video they saw on YouTube to say, ‘OK, I haven't seen that, can I see that?”

Again, it is important to ask questions to high school students, but parents should expect that teens are familiar with protests (and racial inequality).

“You've got to be honest with yourself that they know about it. This is everywhere,” Dougé said.

But understanding what they know and adding context can help.

“It's really important to hear their voice, but then also use books to show them images of historic protests,” Nunez said. “Really start showing the history of race and racism and protesting because it's not something that's new. It's something that has existed and it's a part of our history.”

It can also be a time where parents talk to their teens about critical thinking and media literacy. Parents can say something like: “Oh, that's interesting. Where did you get that information?” Dougé suggested.

“These are opportunities when they're starting to become independent and parents are helping them develop those skills,” Dougé said. “You're shepherding your kids so that they can become an adult that's a free thinker and can make the world a better place. I think that's what all parents want for their kids.”

"To really get to that better world, that more equitable world, we need to strive to be anti-racist," she said. "If we are not even willing to name the names and label of racism for what it is we we will never get there."

Books that can help

The authors of the book "All American Boys" joined TODAY to discuss how to talk about racism, protests and police violence with kids. Their book is about two boys, one black, one white, whose lives are forever linked and changed by an act of police violence. Here are Jason Reynolds' and Brendan Kiely recommend the following books for further reading by parents and kids: