DA: No Charges Against Officer in Tennessee School Shooting

The police officer who shot and killed a student in a Tennessee high school will not face criminal charges, a district attorney announced Wednesday.

Knox County District Attorney General Charme Allen said she determined the shooting of 17-year-old Anthony J. Thompson Jr. by Knoxville police Officer Jonathon Clabough was “justifiable” under Tennessee’s self-defense law. Allen added that she wouldn't press any other charges against the three other officers present at the time of the April 12 shooting at Austin-East Magnet High School in the East Tennessee city.

“It wasn’t an easy case; it wasn’t clean cut," Allen told reporters during a lengthy news conference where she released for the first time the various police body camera tapes, surveillance footage, 911 audio and other documents surrounding the shooting.

According to the video, four officers responded to the school after a domestic abuse call from the mother of Thompson's former girlfriend. The officers went into a bathroom where they believed Thompson was, but Allen's office said the officers did not know Thompson was carrying a handgun.

The next steps occurred in less than 15 seconds. The video shows the officers locating and then attempting to handcuff Thompson. One officer grabbed Thompson's right arm, but Thompson's left arm was in his sweatshirt pocket where the video shows he was holding a handgun. The barrel of the weapon could be seen peeking through the pocket. Thompson's weapon went off, hitting a trash can but not any of the officers.

The shot confused the officers into thinking their lives were in danger and one of them was potentially injured, Allen said — pointing to the various statements they later gave investigators. 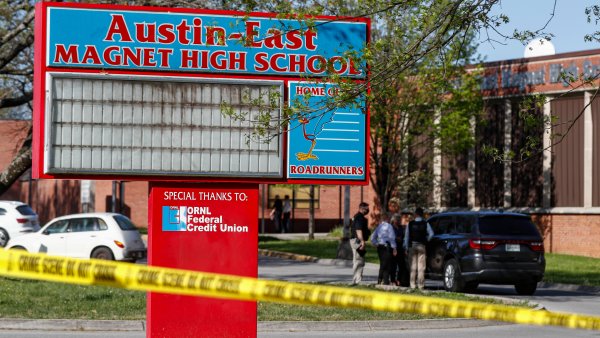 Clabough can be seen removing his weapon and shooting Thompson in the shoulder. Clabough fired his weapon again as Thompson fell to the ground with the officers surrounding him. Clabough's second shot accidentally hit police Officer Adam Wilson in the leg.

A separate unnamed student was in a bathroom stall. The body camera footage shows an officer handcuff that student, who could be heard screaming for officers to tend to Thompson's injuries because he could see blood coming from Thompson's body.

Allen said the officers did not know Thompson had been shot until two minutes after handcuffing him and turning over his body. That's when they saw the large amounts of blood and called the school nurse for medical assistance.

A medical examiner report showed that, because of the way Clabough shot Thompson, there was nothing the officers or school nurse could have done to save his life.

Knoxville police Chief Eve Thomas said in a statement that she was thankful the investigation determined that her officers’ actions were justified and “cleared of any wrongdoing.”

The newly released video clarifies what transpired in the bathroom after conflicting accounts from the Tennessee Bureau of Investigation. In a news conference shortly after the shooting, TBI Director David Rausch said Thompson had fired shots as officers entered the bathroom, striking an officer. Two days later, the TBI changed its statement, saying the student’s gun was fired during a struggle with school resource officer Adam Willson, who was wounded. The TBI’s second statement said the officer was not shot with Thompson’s gun.

The conflicting statements helped fuel activists, political leaders and media outlets to demand that Allen's office publicly release the police body camera video after she initially resisted, citing both the ongoing investigation and her promise that Thompson's family would view the video before the public.

However, Allen — who has never pressed charges against an officer in the nearly dozen police shooting cases she's investigated — was forced to hand over the footage Wednesday when a judge agreed with city officials and media outlets that the tapes should be released.

“My preference would not to do this today, but I'm under pressure from you (the media), from politicians, and activists groups,” she said. “I get it. You should be able to see the video. I just think the timing, we have to come up with a better process.”

Thompson's family spent four hours with Allen earlier that day going over every detail of the footage, she said.

Knoxville Mayor Indya Kincannon said she had reached out to Thompson's family to express her sympathy but they did not want to meet with her.

“My heart goes out to the family of Anthony Thompson Jr. and also the other families of children who have lost their lives in other circumstances, all in such a short time all from the same school. It’s heartbreaking," she said.

Off-campus gun violence killed three other Austin-East students this year. After pausing in-person classes because of the most recent shooting, students will return Thursday.

“I know it’s going to be a different experience, said Breyauna Holloway, who has two children who attend the school. “I know the teachers are going to be very emotional, so it may be hard for them and probably a lot of the students focus and concentrate the way that they should.”