Faith Group Deletes Mentions of Barrett From Its Website

Barrett, a federal appeals judge, has declined to publicly discuss her decades-long affiliation with People of Praise

A religious organization tied to Amy Coney Barrett, President Trump’s Supreme Court nominee, sought to erase all mentions and photos of her from its website before she meets with lawmakers and faces questions at her Senate confirmation hearings.

Barrett, a federal appeals judge, has declined to publicly discuss her decades-long affiliation with People of Praise, a charismatic Christian group that opposes abortion and holds that men are divinely ordained as the “head” of the family and faith. Former members have said the group's leaders teach that wives must submit to the will of their husbands. A spokesman for the organization has declined to say whether the judge and her husband, Jesse M. Barrett, are members.

But an analysis by The Associated Press shows that People of Praise erased numerous records from its website during the summer of 2017 that referred to Barrett and included photos of her and her family. At the time, Barrett was on Trump’s short list for the high court seat that eventually went to Justice Brett Kavanaugh.

Last week, when Barrett again emerged as a front-runner for the court, more articles, blog posts and photos disappeared. After an AP reporter emailed the group’s spokesman Wednesday about members of Jesse Barrett’s family, his mother’s name was deleted from the primary contact for the South Bend, Indiana, branch. All issues of the organization’s magazine, “Vine and Branches,” were also removed. 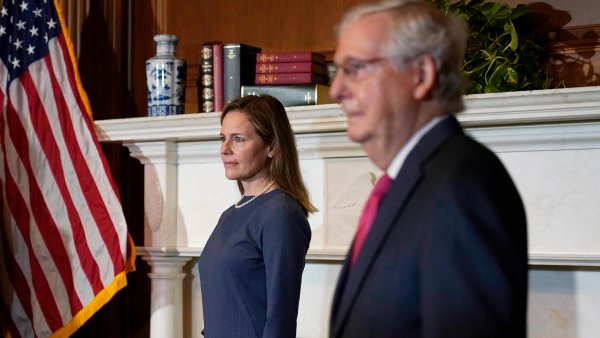 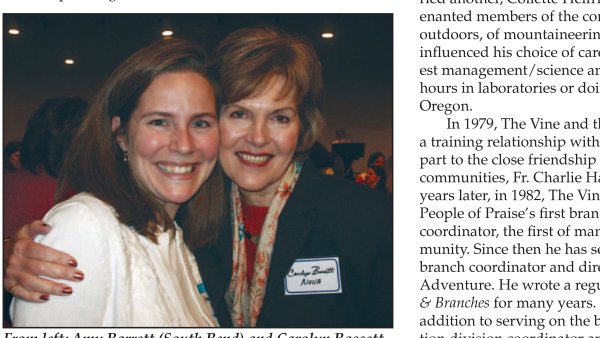 Sean Connolly, People of Praise’s spokesman, confirmed in an email that information was being wiped from the group’s website.

“Recent changes to our website were made in consultation with members and nonmembers from around the country who raised concerns about their and their families’ privacy due to heightened media attention,” Connolly said.

The deletions come at a time when Barrett’s background is under intense scrutiny by senators who will soon vote on whether to approve a lifetime appointment to the nation's highest court, and by women’s rights groups, religious organizations and voters who will try to determine how she might rule on crucial issues that are likely to come before the Court.

The AP was able to track the deletions and access the missing information through the Internet Archive, a nonprofit group that has saved digital versions of more than 330 billion web pages since 1996.

Barrett, 48, did not mention People of Praise in her 2017 or 2020 Senate judicial questionnaires, the most recent of which was released Tuesday. And a request to interview her made through the 7th Circuit Court of Appeals in Chicago, where she currently serves as a judge, was declined.

President Donald Trump and Democratic Nominee for President Joe Biden debate their stance on filling the Supreme Court seat left vacant by the death of Ruth Bader Ginsburg and how it will effect the Affordable Care Art at the first Presidential Debate in Cleveland, Oh.

The AP reported earlier this week that People of Praise’s belief system is rooted in charismatic Catholicism, a movement that grew out of the influence of Pentecostalism, which emphasizes a personal relationship with Jesus and can include baptism in the Holy Spirit and speaking in tongues.

Founded in 1971, the group’s 22 branches organize and meet outside the purview of the Roman Catholic Church and include people from several Christian denominations, though the majority of its roughly 1,800 adult members remain Catholic.

Former female members of the group told AP earlier this week that wives were expected to obey their husband’s wishes in all matters, including providing sex on demand. One of the women also said she was forbidden from getting birth control because married women were supposed to bear as many babies as God would provide.

Current People of Praise members, including Amy Barrett’s father, told AP that suggesting male members dominate their wives is a “misunderstanding” of the group’s teachings and that women are free to make their own decisions.

“Our members are always free to follow their consciences, formed by reason and the teachings of their churches,” Connolly said Monday. “Decision making in the People of Praise is collegial, engaging the entire community in consultation on significant matters that affect us. Additionally, women take on a variety of crucial leadership roles within People of Praise, including serving as heads of several of our schools and directing ministries within our community.”

At 48 years old, Judge Amy Coney Barrett would be youngest Justice on the Supreme Court.

Adult members of the group take a covenant that includes a passage where members promise to follow the teachings and instructions of the group’s pastors, teachers and evangelists.

It’s unclear whether Barrett took the covenant. But members of the organization and descriptions of its hierarchy show that members almost invariably join the covenant after three to six years of religious study or they leave, so it would be unusual for Barrett to be involved for so many years without having done so.

Among the items that were scrubbed in 2017 were select back issues of “Vine & Branches” that included birth and adoption announcements for some of the couple’s seven children. Also deleted was a 2006 issue of the magazine that included a photo of a smiling Amy Barrett attending the group’s Leaders’ Conference for Women.

A 2008 feature article described how three of Amy Barrett’s young daughters in Indiana were using then-newly developed video conferencing technology to keep in touch with their grandparents in Louisiana.

Web pages and articles that mentioned Amy Barrett’s father, Michael Coney Sr., who has served as the principal leader of People of Praise’s New Orleans branch and was on the group’s national board as recently as 2017, also disappeared. And a 2006 magazine story about Barrett’s parents that referred to Linda Coney as a “handmaid,” a female leader assigned to help guide other women, was also deleted. The article noted that five of the Coney’s seven children were People of Praise members, though it did not say which ones.

We know the Supreme Court is important, but how does it work? George Washington University School of Law Professor Paul Schiff Berman explains how the court functions and the ways that coronavirus has changed its process this year.

A 2012 tribute written by Jesse Barrett about his recently deceased grandfather, Eugene Geissler, also disappeared. The story recounted how Jesse Barrett’s grandparents joined the religious community in 1976 and raised 16 children in the group.

At his wake, according to the tribute, a longtime member recounted how the couple was once audited by the Internal Revenue Service because the large number of dependents claimed on their return was considered suspicious. In response, Barrett wrote, his grandfather loaded all his children into a station wagon and drove them to the IRS examiner’s office.

Jesse Barrett, a former federal prosecutor who now works in private practice, did not respond to voicemail or email sent through his South Bend law firm.

In her speech accepting Trump’s nomination at the White House on Saturday, Amy Barrett put particular emphasis on the partnership of her own marriage, saying she expected from the start the she and her husband would run their household together.

“As it has turned out, Jesse does far more than his share of the work,” she said. “To my chagrin, I learned at dinner recently that my children consider him to be the better cook.”