President Donald Trump put forth a dizzying array of fuzzy accounting and outright false claims in an extraordinary phone call to Georgia's secretary of state seeking a reversal of his election defeat, fabricating a slew of votes that he said should've been counted in his favor.

In the hourlong conversation Saturday with Georgia’s secretary of state, Brad Raffensperger, Trump suggested that the Republican “find” enough votes to hand Trump the victory.

The Associated Press and NBC News obtained the full audio of Trump’s conversation with Georgia officials from a person on the call.

A look at Trump's claims on the call and how they compare with reality:

TRUMP: “If we can go over some of the numbers, I think it’s pretty clear we won, we won very substantially in Georgia.”

THE FACTS: No, Trump lost Georgia in an election the state has certified for Democrat Joe Biden. Republican election officials have affirmed the election was conducted and counted fairly.

With ballots counted three times, including once by hand, Georgia’s certified totals show Trump lost to Biden by 11,779 votes out of nearly 5 million cast. Raffensperger certified the totals with officials saying they’ve found no evidence that Trump won.

No credible claims of fraud or systemic errors have been sustained. Judges have turned away legal challenges to the results, although at least one is still pending in state court.

TRUMP: “People should be happy to have an accurate count... We have other states I believe will be flipping to us shortly.”

THE FACTS: No reversal of the election outcome is in the offing, in Georgia or other states.

Biden defeated Trump by some 7 million popular votes nationwide and by a tally of 306-232 in the Electoral College, achieving victory in other key states such as Michigan, Wisconsin, Pennsylvania and Arizona.

Trump’s former attorney general, William Barr, found no evidence of widespread election fraud. Trump’s allegations of massive voting fraud have been dismissed by a succession of judges and refuted by state election officials and an arm of his own administration’s Homeland Security Department.

A group of Senate Republicans, led by Sens. Josh Hawley and Ted Cruz, say they plan to object to the election results when Congress meets on Wednesday to tally Biden’s Electoral College victory over Trump.

The objections will force votes in both the House and Senate, but none are expected to prevail.

TRUMP: “The other thing, dead people. So dead people voted. And I think the number is in the — close to 5,000 people. And they went to obituaries. They went to all sorts of methods to come up with an accurate number. And a minimum is close to about 5,000 voters.”

THE FACTS: Not true. Georgia officials have debunked previous claims by the Trump campaign in November that three particular people had voted illegally, finding that other people with similar names had voted. At the time, a local district attorney announced an investigation into whether a ballot had illegally been cast in the name of a northwest Georgia man who died in 2015.

On Saturday, Raffensperger said two illegal votes on behalf of dead people have been confirmed, not thousands as Trump alleged. “The actual number were two. Two. Two people that were dead that voted. And so that’s wrong,” Raffensperger said.

Gabriel Sterling, who oversees Georgia’s voting systems, gave an update on Tuesday on the state’s recount efforts. Sterling also gave a warning to anyone considering moving to Georgia to vote in the two senate seat runoffs: “If you want to move to Georgia and be part of the number one state in America to do business, we’re happy to have you… [but] don’t game our system.”

TRUMP: “We have anywhere from 250 (thousand) to 300,000 ballots were dropped mysteriously into the rolls, much of that had to do with Fulton County, which hasn’t been checked.”

THE FACTS: There's nothing mysterious or suspect about it. He is describing a legitimate vote counting process, not a sudden surge of malfeasance.

Trump appears to be referring to large numbers of votes that were tabulated in the early hours of Wednesday morning after Election Day and later. The arrival of those votes was not mysterious, but expected, because many of Georgia’s 159 counties had large stacks of mail-in ballots that had to be tabulated after polls closed and in-person ballots were counted.

Indeed, news organizations and officials had warned in the days leading up to the election that the results would likely come in just as they did: In-person votes, which tend to be counted more quickly, would likely favor the president, who had spent months warning his supporters to avoid mail-in voting and to vote in person either early or on Election Day.

And mail-in-ballots, which take longer to count since they must be removed from envelopes and verified before they are counted, would favor Biden. States tend to count mail-in ballots at the end of the process.

TRUMP: “We think ... if (there is) a real check of signatures going back in Fulton County, you’ll find at least a couple of hundred thousand of forged signatures.”

THE FACTS: That has no basis in reality.

It would be impossible for anyone to have forged hundreds of thousands of signatures on mail-in ballots in Fulton County because there were only about 147,000 mail-in ballots in Georgia’s most populous county, with about 116,000 of them going to Biden.

Control of the U.S. Senate will be decided on Jan. 5 by two Senate runoff races in Georgia: one faceoff between David Perdue and Jon Ossoff and the other between Kelly Loeffler and Raphael Warnock. NBCLX's Noah Pransky has everything you need to know, whether you live in the state or not.

TRUMP, claiming thousands of voters moved out of Georgia, registered in another state, and then improperly cast ballots in Georgia: “They came back in, and they voted. That was a large number.”

THE FACTS: Not so. Trump supporters are working from a list of questionable accuracy, according to Ryan Germany, the general counsel for Raffensperger’s office. He told Trump during the call that the claims have been investigated and that in many cases, voters “moved back years ago. It’s not like it happened just before the election. There’s something about that data that it’s just not accurate.”

TRUMP: “It doesn’t pass the smell test, because we hear they’re shredding thousands and thousands of ballots and now what they’re saying (is) ‘Oh, we’re just cleaning up the office.’”

THE FACTS: The shredding in question was taking place in suburban Cobb County, not in Fulton County as Trump claimed. Cobb County elections officials said Nov. 24 that none of the items shredded by a contractor were “relevant to the election or the re-tally” and instead were things like old mailing labels, other papers with voter information, old emails and duplicates of absentee ballot applications.

TRUMP, claiming that a Fulton County election worker fed ballots through a machine three times instead of only once, saying his campaign would release a video proving it: “It can’t be disputed. We have a version that you haven’t seen, but it’s magnified. It’s magnified and you can see everything. For some reason, they put it in three times each ballot. And I don’t know why, I don’t know why three times and not five times, right?"

THE FACTS: There was no double or triple tallying of ballots. Raffensperger noted that ballots in Georgia have been counted and then recounted twice more for accuracy, including once by hand, and no discrepancy showed up in the Fulton County ballots, as it would have if someone improperly counted votes multiple times. “We did an audit of that,” Raffensperger told Trump. “It was proved conclusively that they were not scanned three times.”

TRUMP, attacking a legal settlement that Georgia signed with the state Democratic Party over how signatures on absentee ballot applications and absentee ballots are verified. “You can’t check signatures, you can’t do that... You’re allowed to do harvesting, I guess, in that agreement. That agreement is a disaster for this country.”

THE FACTS: There is nothing in the March 6 consent decree that prevents Georgia’s election clerks from scrutinizing signatures. The legal settlement addresses accusations about a lack of statewide standards for judging signatures on absentee ballot envelopes. Raffensperger has said that not only is it entirely possible to match signatures, but that the state requires it.

Ballot harvesting, the practice of collecting numbers of absentee ballots and delivering them back to elections officials, remains illegal in Georgia.

TRUMP, referring to investigations into his baseless claims of voter fraud: “You have your never-Trumper U.S. attorney there.”

THE FACTS: The U.S. attorney in Atlanta is a actually a Trump appointee. Byung J. “BJay” Pak is a longtime Republican who also served in the Georgia House of Representatives from 2011 until 2017. He was nominated by Trump to become the U.S. attorney for the Northern District of Georgia in 2017. In announcing his nomination, the White House said that Pak and five other nominees for U.S. attorney’s posts “share the president’s vision for ‘Making America Safe Again.’” Pak had previously also worked as an assistant U.S. attorney. 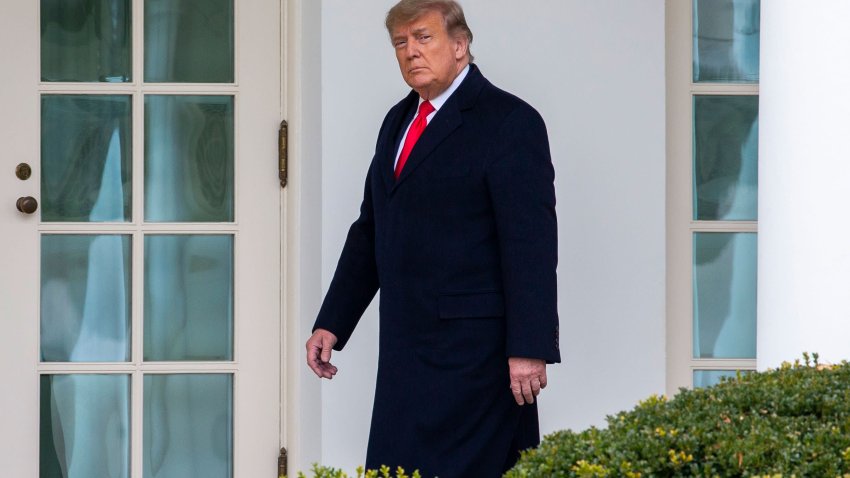 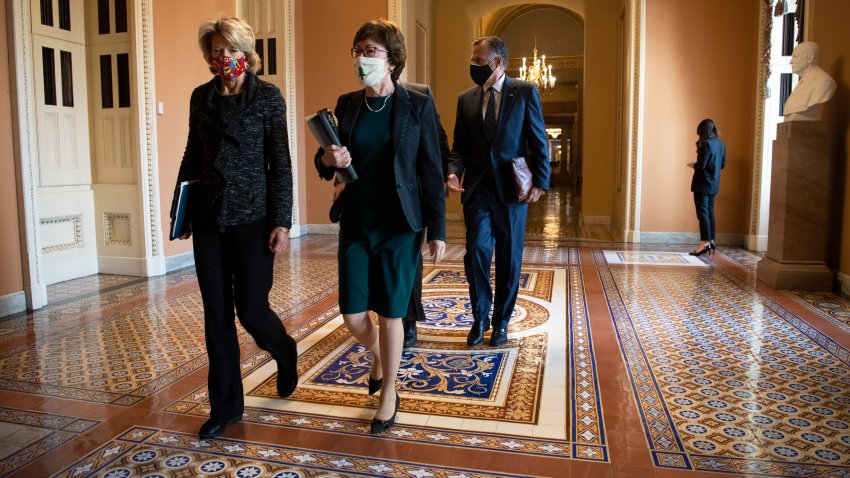 TRUMP, citing 18,000 “suspicious” votes: “The tape that’s been shown all over the world ... they said very clearly there was a major water main break. Everybody fled the area and then they came back ... there were no Republican poll watchers ... and there was no law enforcement ... It was stuffed with votes. They weren’t in an official voter box, they were in what looked to be in suitcases or trunks. ... The minimum number it could be ... was 18,000 ballots, all for Biden.”

THE FACTS: That's a gross distortion of what actually happened.

Republicans have contended that their observers were told to leave Fulton County’s vote counting center, but elections officials said they actually left after confusion that arose because election workers thought they were done for the night.

An independent monitor and an investigator in fact oversaw the vote count, according to state and county officials. Trump also refers to a fake confession attributed by a woman allegedly involved in the incident that was posted on social media.

TRUMP: “In other states we think we found tremendous corruption with Dominion machines, but we’ll have to see.”

THE FACTS: No “tremendous corruption” has been found.

There’s “no evidence that any voting system deleted or lost votes, changed votes or was in any way compromised,” said the federal agency that oversees election security, in a statement joined by state and electoral-industry officials.

Electoral College members across the country cast their votes Monday to officially declare Joe Biden the winner of the 2020 presidential election.

EDITOR'S NOTE — A look at the veracity of claims by political figures.