US Backers of Canada Protests Sent Funding North. Its Biggest Impact May Be Back Home

The Canadians who have disrupted travel and trade with the U.S. and occupied downtown Ottawa for nearly three weeks have been cheered and funded by American right-wing activists and conservative politicians who also oppose vaccine mandates and the country's liberal leader.

Yet whatever impact the protests have on Canadian society, and the government of Prime Minister Justin Trudeau, experts say the outside support is really aimed at energizing conservative politics in the United States. Midterm elections are looming, and some Republicans think standing with the protesters up north will galvanize fund-raising and voter turnout at home, these experts say.

“The kind of narratives that the truckers and the trucker convoy are focusing on are going to be really important issues for the (U.S.) elections coming ahead,” said Samantha Bradshaw, a postdoctoral fellow at the Digital Civil Society Lab at Stanford University. “And so using this protest as an opportunity to galvanize their own supporters and other groups, I think it’s very much an opportunity for them.”

By Wednesday afternoon, all previously blocked border crossings had been re-opened, and police began focusing on pressuring the truckers and other protesters in Ottawa to clear out of the capital city or face arrest, fines and confiscation of their vehicles. 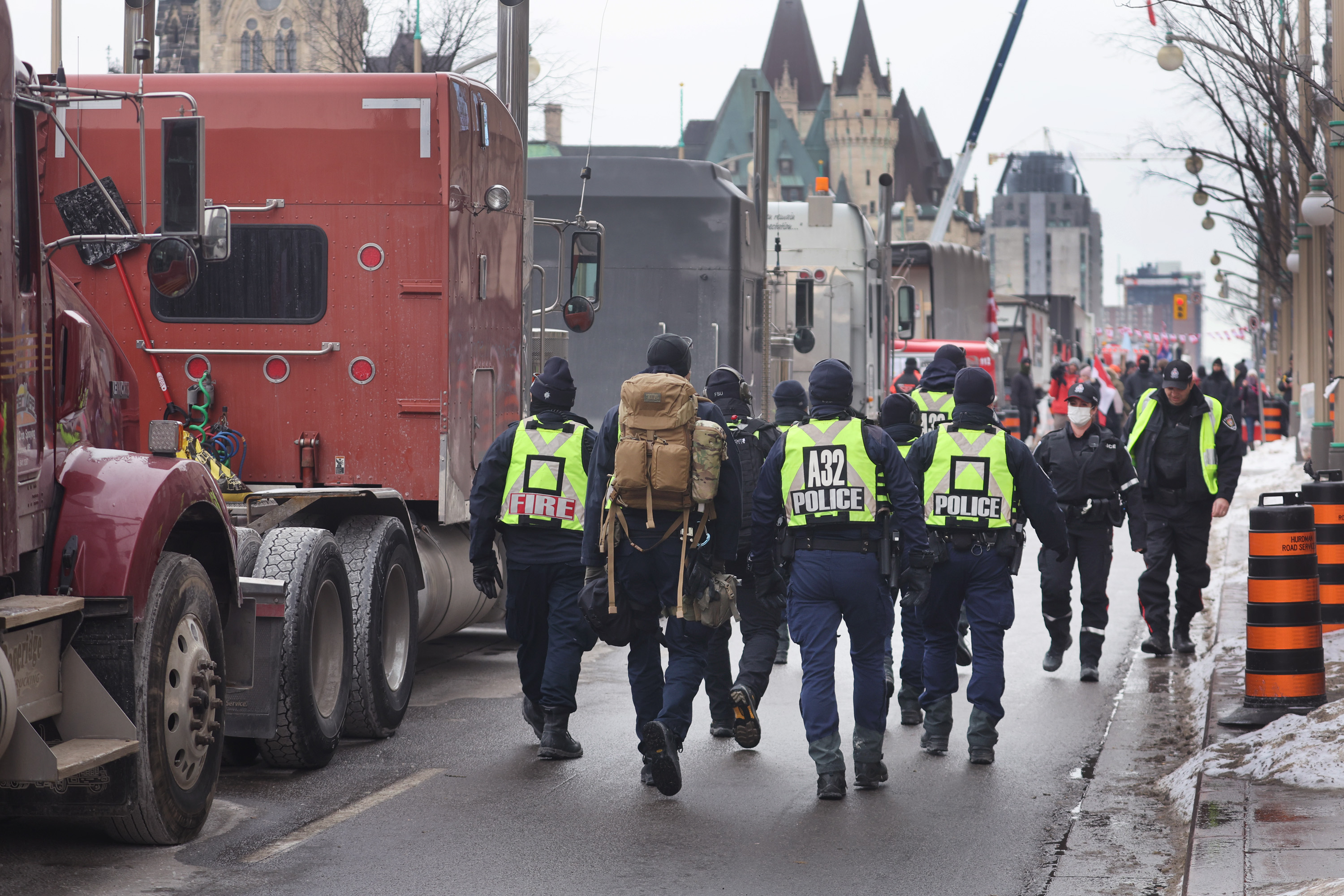 Tensions Mount in Ottawa as Police Warn Truckers to Leave 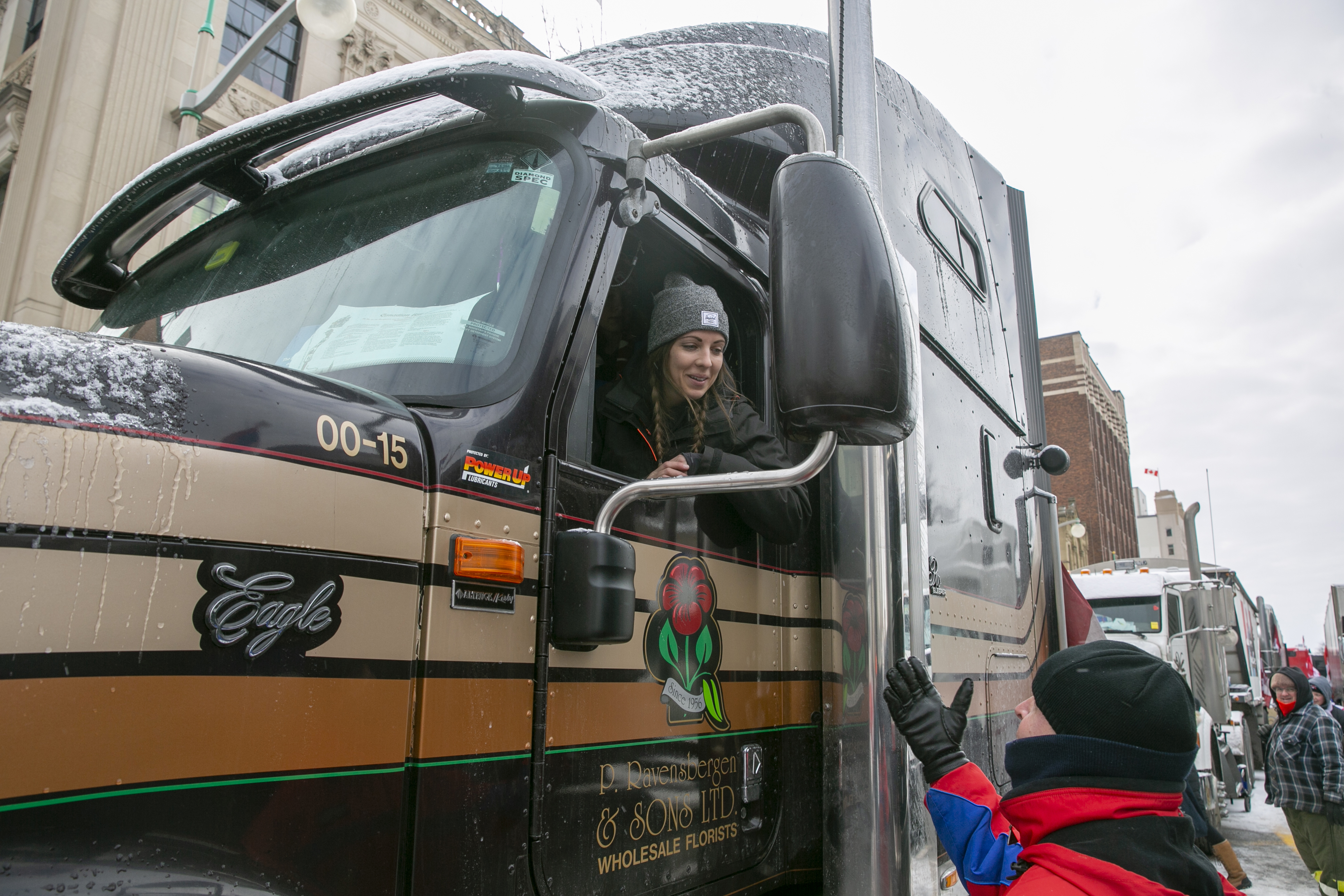 About 44 percent of the nearly $10 million in contributions to support the protesters originated from U.S. donors, according to an Associated Press analysis of leaked donor files. U.S. Republican elected officials, including Texas Sen. Ted Cruz and Georgia Rep. Marjorie Taylor Greene, have praised the protesters calling them “heroes” and “patriots.”

“What this country is facing is a largely foreign-funded, targeted and coordinated attack on critical infrastructure and our democratic institutions,” Bill Blair, Canada’s minister of public safety and emergency preparedness, said earlier this week.

Demonstrators in Ottawa have had been regularly supplied with fuel and food, and the area around Parliament Hill has at times resembled a spectacular carnival with bouncy castles, gyms, a playground and a concert stage with DJs.

GiveSendGo, a website used to collect donations for the Canadian protests, has collected at least $9.58 million dollars, including $4.2 million, or 44%, that originated in the United States, according to a database of donor information posted online by DDoSecrets, a non-profit group.

The Canadian government has been working to block protesters’ access to these funds, however, and it is not clear how much of the money has ultimately gotten through.

Millions of dollars raised through another crowdfunding site, GoFundMe, were blocked after Canadian officials raised objections with the company, which determined that the effort violated its terms of service around unlawful activity.

The GiveSendGo database analyzed by AP showed a tally of more than 109,000 donations through Friday night to campaigns in support of the protests, with a little under 62,000 coming from the U.S.

The GiveSendGo data listed several Americans as giving thousands or tens of thousands of dollars to the protest, with the largest single donation of $90,000 coming from a person who identified himself as Thomas M. Siebel.

Siebel, the billionaire founder of software company Siebel Systems, did not respond to messages sent to an email associated with a foundation he runs and to his LinkedIn account.

A representative from the Siebel Scholars Foundation, who signed her name only as Jennifer, did not respond to questions about whether Siebel had donated the money. But she said Siebel has a record of supporting several causes, including efforts to “protect individual liberty.”

“These are personal initiatives and have nothing to do with the companies with which he is associated,” she wrote.

Siebel has donated hundreds of thousands of dollars to Republican candidates and organizations over the last 20 years, according to Federal Election Commission records, including a $400,000 contribution in 2019 to a GOP fundraising committee called “Take Back the House 2020.”

The GiveSendGo Freedom Convoy campaign was created on Jan. 27 by Tamara Lich. She previously belonged to the far-right Maverick Party, which calls for western Canada to become independent.

The Canadian government moved earlier this week to cut off funding for the protesters by broadening the scope of the country’s anti-money laundering and terrorist financing rules to cover crowdfunding platforms like GiveSendGo.

“We are making these changes because we know that these platforms are being used to support illegal blockades and illegal activity, which is damaging the Canadian economy,” said Canadian Finance Minister Chrystia Freeland.

Perhaps more important than the financial support is the cheerleading the Canadian protesters have received from prominent American conservative politicians and pundits, who see kindred spirits in their northern neighbors opposing vaccine mandates.

On the same day Lich created the GiveSendGo campaign, retired Army Lt. Gen. Michael Flynn shared a video of the convoy in a post on the messaging app Telegram.

“These truckers are fighting back against the nonsense and tyranny, especially coming from the Canadian government,” wrote Flynn, the former head of the Defense Intelligence Agency who served briefly as former President Donald Trump’s national security adviser.

A few days later, Flynn urged people to donate to the Canadian protesters. Earlier this week, he twice posted the message “#TrudeauTheCoward” on Telegram, referring to the prime minister who leads Canada’s Liberal Party.

Fox News hosts regularly laud the protests, and Trump weighed in with a broadside at Trudeau, calling him a “far left lunatic” who has “destroyed Canada with insane COVID mandates.” Cruz called the truckers “heroes” and “patriots,” and Greene said she cannot wait to see a convoy protest in Washington.

Sen. Rand Paul, R-Ky., said he hopes truckers come to America and “clog up cities” in an interview last week with the Daily Signal, a news website of the conservative Heritage Foundation.

Far-right and anti-vaccine activists, inspired by the Canadian actions, are now planning American versions of the protests against COVID-19 mandates and restrictions modeled on the Canadian demonstrations.