At halftime Saturday night, UCLA coach Mick Cronin challenged his team to keep it close 10 more minutes and that they should then crank up the pressure on unbeaten Gonzaga.

The flawless combination created a masterpiece of a college basketball game. It just didn't lead to a win for the upstart Bruins.

After UCLA star Johnny Juzang's basket with 3.3 seconds to go in overtime tied things up at 90, Jalen Suggs answered with a buzzer-beating 3-pointer to send the unbeaten Bulldogs into their second national championship game and the Bruins home to think about how close they came to adding another memorable chapter to school history.

“When Johnny got the putback, I didn’t have a timeout left so I was running at my guys to get their attention to trap the ball and they got there late," Bruins coach Mick Cronin said. “It’s not their fault because we trained them to get back because Gonzaga is so fast. If you look at the film I was trying to get them to come up so he (Suggs) couldn’t get into that shot. Still, it was a bank shot from half court."

UCLA (22-10) played this one in a decidedly different way than they had through their incredible tourney run that started in the First Four.

The Bruins often traded baskets with Gonzaga (31-0), one of the nation’s most prolific scoring teams, and didn’t allow the Zags to go on one of their trademark runs. The Bruins kept things slow, deliberate and tense.

It was almost enough.

Juzang finished with 29 points to lead the Bruins, trying to become the first No. 11 seed to reach the championship game. Afterward, the stunned UCLA players gathered around as the officials looked at a replay review to make sure the shot was off in time. It was.

UCLA can take solace in doing something no other team did this season by forcing the high-scoring Zags into overtime. It just couldn't finish the job and continue an incredible NCAA postseason run in which they had already beaten Michigan State and Alabama in overtime, ran away from BYU and Abilene Christian, and then held off top-seeded Michigan to join VCU as the only teams to go from the First Four to the Final Four.

The Bruins were fighting for school pride, too.

Since then, two undefeated teams had reached a Final Four in Indianapolis and lost — UNLV to Duke in 1991, Kentucky to Wisconsin in 2015. Gonzaga is the third and the Zags, too, were in a dogfight.

“Everybody is going to ask what I just told my team, so I’ll just tell you: I told them they have to let the last shot go," Cronin said. “And as much as they want to be beaten down and gutted and miserable, they have to let it go because they’re winners. As a coach all you can ask of your players is to give everything they’ve got."

UCLA kept it close even when it looked like things might get away. They fought back from a 64-57 deficit midway through the second half. They had a chance to win it in regulation but Johnny Juzang was called for a charge.

In overtime, Gonzaga pulled out to an 87=83 lead but when they couldn’t put it away, the Bruins capitalized. Cody Riley hit a 15-footer. The Zags answered with a 3-pointer from Andrew Nembhard to make it 90-85 with 1:15 to go and yet the Bruins rallied to tie it again at 90 — only to see Suggs come up with a magical shot to advance for a showdown with Baylor on Monday night.

“Kudos to them, they're a very good team," Juzang said. “But we're UCLA and the guys on this team, there’s no one I’d rather go to battle with. And we expect to win. We are who we are and every game we went out and left it out there and let the best man win." 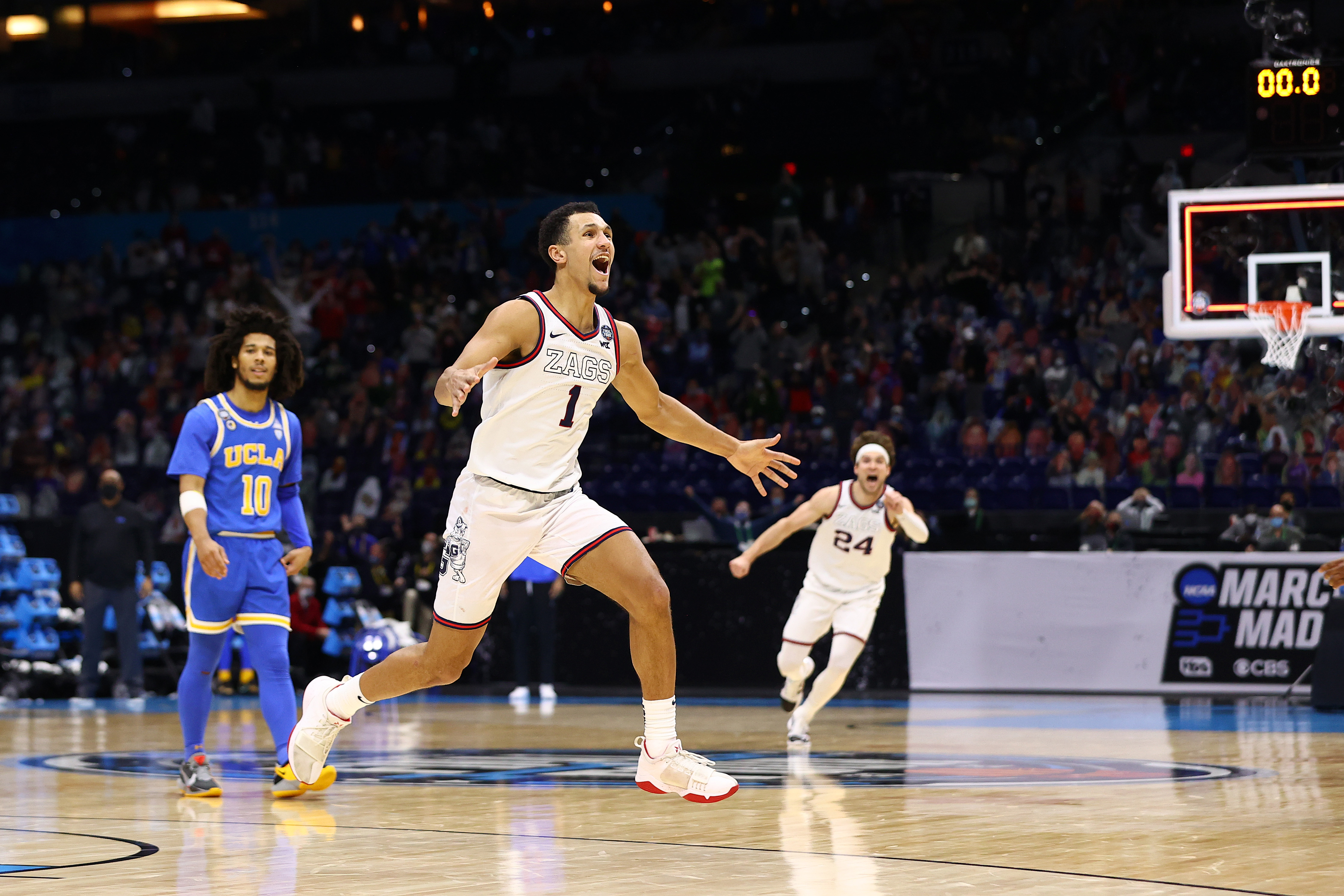