Analysis: After Another Fracas, the NBA Had to Hit Back

LeBron James was suspended for the Los Angeles Lakers game against the New York Knicks on Tuesday night at Madison Square Garden.

LeBron James is missing one game.

Markieff Morris is missing his eighth, with no end in sight.

Those two things are more connected than some might realize.

By suspending James for Tuesday night’s game against New York — the Los Angeles Lakers’ lone visit to Madison Square Garden this season — over his role in an incident in Detroit on Sunday, the NBA sent a very loud, very clear message to anyone who might want to partake in future on-court dustups.

Sunday night’s mess in Detroit — the second significant on-court fracas in the NBA this season — earned James the first suspension of his 19-year career, plus got the Pistons’ Isaiah Stewart a two-game suspension on top of the eight stitches that were needed to close a gash in his head.

“He felt like he got a cheap shot across his brow,” Pistons coach Dwane Casey said. “On the street, it’d be a different story.”

Maybe so. But the NBA isn't played on the street and the league doesn’t want anything like that happening on its watch. So, after two very ugly incidents separated by only a couple of weeks, the NBA decided to hit back by sitting down its biggest name.

James was ejected for throwing the elbow that turned the scuffle into a melee. The NBA had options about what other sanctioning was needed. There was precedent for just fining James, as has been the case in some similar situations. But the league evidently thought that wouldn’t be enough and went with the suspension, for a nationally televised game in arguably the world’s most famous arena.

Fans will obviously notice his absence.

And that message should resonate loudly at a couple of upcoming games in the next few days — a Pistons-Lakers rematch in Los Angeles on Sunday, a game that both James and Stewart will be eligible to play in, and Denver’s trip to Miami on Monday.

Nuggets-Heat II will be the rematch of a game on Nov. 8, marred in the final moments by Morris overzealously fouling reigning MVP Nikola Jokic of Denver and Jokic responding with a hard forearm into Morris’ back. The force of Jokic's hit was enough to send Miami’s 245-pound forward reeling. Morris — generally considered one of the league’s tough guys — was in obvious and immediate pain.

Jokic was suspended for one game. Morris hasn’t played since, and the Heat have given no indication that he’s even remotely close to returning. Of all the principal players in these two on-court incidents, with all due respect to Jokic and James combining to lose about a half-million dollars in salary and Stewart being bloodied up, nobody has come away with a worse fate than Morris. He can’t play and the Heat have missed him.

By the time the Nuggets visit the Heat on Monday, Morris’ absence will be up to 11 games. And counting.

It could be a circus Monday night in Miami, which, of course, is exactly what the NBA does not want.

Jokic’s two brothers have tickets to the game. They’re quite recognizable and easily excitable, as evidenced by some of their past antics during games. Their infamous Twitter account was short-lived, and it’s reasonable to say the league didn’t find the war of words entertaining between the Jokic brothers and Markieff Morris’ twin brother Marcus Morris of the Los Angeles Clippers.

And don't forget that Heat forward Jimmy Butler was fined and, according to the Denver Post, yelled down the hallway separating the two locker rooms postgame to tell Nuggets players that they know where Miami’s bus was parked, presumably in case anybody wanted to stop by and discuss matters further.

The NBA cannot be happy that there’s going to be so much attention on those two games, because that attention is there for the wrong reasons.

The league also can’t be happy that the incident in Detroit on Sunday night drew obvious parallels to the infamous “Malice at the Palace” melee in Auburn Hills, Michigan in 2004, when a cup was tossed from the stands and triggered perhaps the worst brawl in U.S. sports history when members of the Pistons and Indiana Pacers went into the crowd.

James won’t like the suspension, nor will the Lakers. And it could be argued he didn’t necessarily deserve one, either.

The NBA is sending a message, not to James, but to the whole league.

This needs to end now. 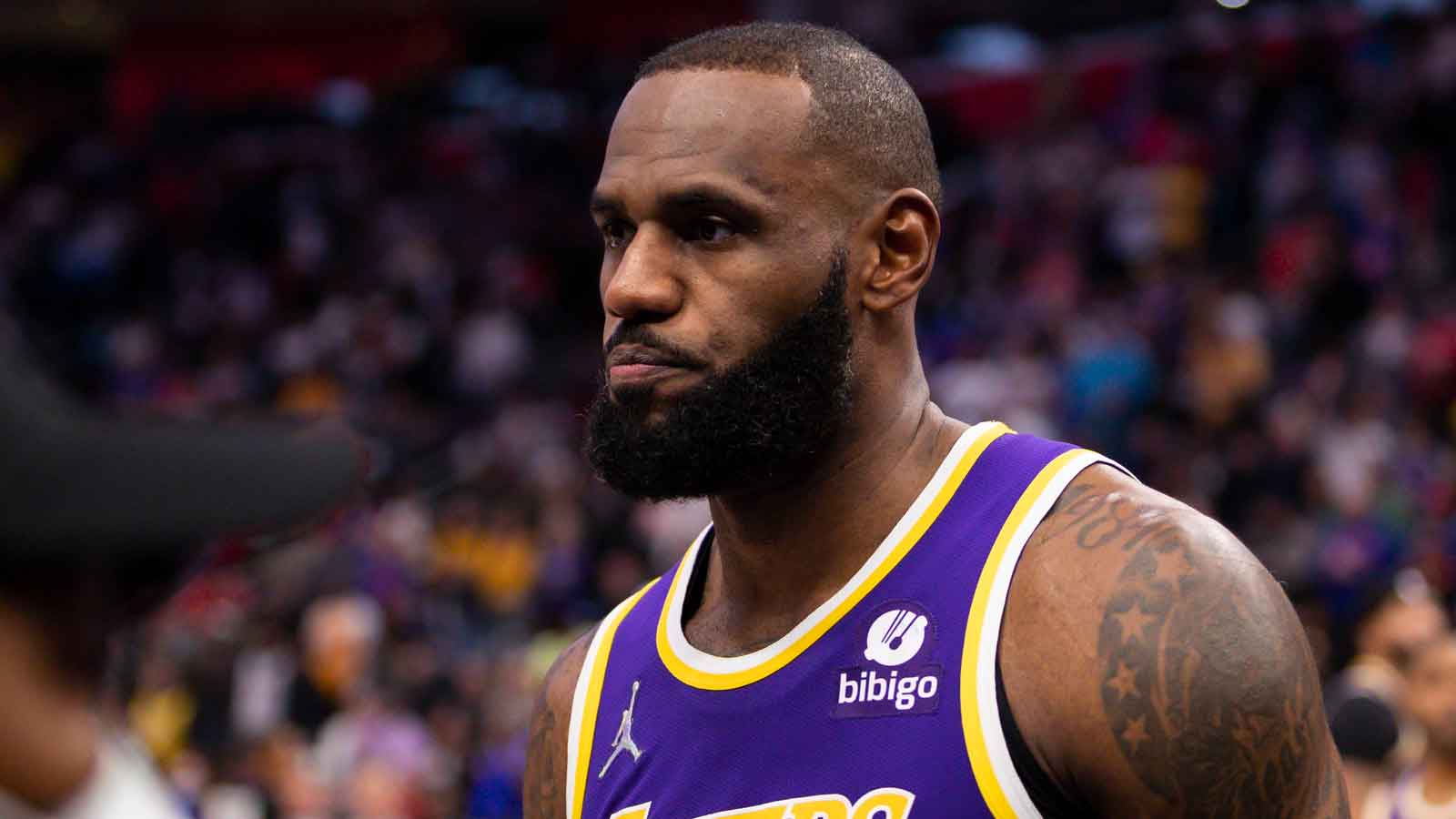