Final Four Set, a Question Left: Can Anybody Beat Gonzaga?

Gonzaga is a No. 1 seed. So is Baylor. Houston, a 2. UCLA is an 11, but it's also the all-time leader in national championships

It’s not easy to bury a team as good as USC, let alone in a half, no matter how easy Gonzaga made it look. Somehow, coach Mark Few called it in advance.

While everyone was fixating on the top-seeded Bulldogs’ make-it-rain offense, one reporter took the opposite tack. He asked Few the day before their game against the high-flying Trojans whether his defense was getting lost in the shuffle. He replied like he’d been waiting days for that question.

“I think,” Few said, “we’ve had some excellent, I mean, off-the-chart performances, and some terrific halves.”

Gonzaga’s defense dropped one of those like an anvil on No. 6 USC in Tuesday night’s Elite Eight contest. Michigan, the bracket’s other No. 1 seed in action, played decent defense against everyone in a UCLA jersey except No. 3, Johnny Juzang, and man, did he make them pay.

NCAA Vice President of Women's Basketball Lynn Holzman has apologized after a video on social media showed the small stack of weights provided to the women's teams in San Antonio in comparison to the spacious weight room for the men's teams in Indianapolis.

The Zags won’t make that mistake when they face the Bruins in one Final Four matchup come Saturday with the chance to extend their perfect (30-0) season. Baylor, the other top seed still standing and the likeliest giant-killer left, plays No. 2 Houston in the other.

Juzang scored 14 of UCLA’s first 16 points and finished with 28, more than half the total in a 51-49 win, He had five more than the Bruins’ four other starters combined and the bench wasn’t much help either. Five teammates took just three shots in 34 minutes and contributed zero points to the effort. Yet that proved enough after Michigan missed its last eight tries, including four in the final 11 seconds that would have put them ahead.

“There’s one or two possessions that can either help you or hurt you and for us,” as coach Juwaan Howard charitably put it, “we came up short.”

The Zags in full flight are something to behold. They were up 7-0 after just two minutes, 15-4 after five and 49-30 at the half. Barely two minutes past intermission, it was 56-34. The rest of the second half was more a formality than a competitive game. Final score: 85-66.

With 68 teams competing in the NCAA men’s tournament, anyone who says they can predict the Final Four is a liar. So says ESPN's Stephen A. Smith, who mixed it up with LX News host Ashley Holt about his March Madness favorites and his action figure, Mini Stephen A.

If you’re sensing a pattern here, you should be. Most of the traffic is going one way.

The Zags scored inside, in transition and from behind the 3-point line. They’re so easy on the eyes with the ball in their hands that it’s easy to overlook how often they got it back without a made USC basket. Unless, that is, you had an assistant coach charting turnovers (seven of their 10 total in the opening 12 minutes), steals, offensive rebounds and desperation shots that probably weren’t a good idea in the first place.

Trojans coach Andy Enfield had that breakdown within arm’s reach when he sat for the postgame press conference. USC shot just 39% from the field, 27% from behind the arc and grabbed a dozen less rebounds. He didn’t need to look.

“It was a little surprising,” he shrugged, “because we’d been playing great basketball.” 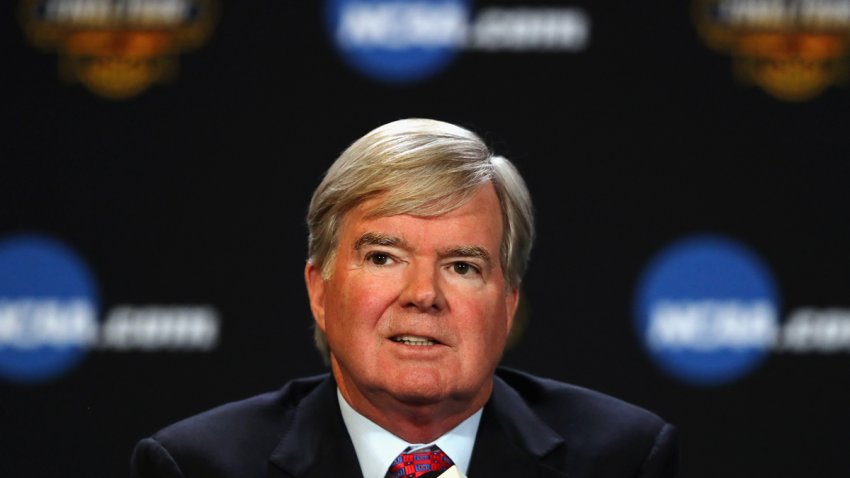 So has Baylor, which showed plenty of firepower and some of the same grit on the other end while de-fanging No. 3 Arkansas a night earlier. The Bears have forced plenty of turnovers against three previous tournament rivals — Wisconsin, Villanova and the aforementioned Razorbacks (15) — with a reputation for taking care of the ball.

Guard Davion Mitchell, a buzzsaw with the ball in his hands, often winds up drawing the toughest defensive assignment, too.

“Obviously, I think he’s the best defender in the country,” Baylor coach Scott Drew said. He added: “We call him Off Night, because people tend to have off nights with him. But he’s a nightmare to bring the ball up against. And he sets the tone for our defense.”

Gonzaga and Baylor were scheduled to play in early December before the Zags program ran afoul of the sport’s COVID-19 protocol. Both were in a separate class from the rest of college basketball at the time. Then Baylor’s bout with the virus came late in the season, requiring a pause of three weeks plus.

The 2021 Division 1 Men’s Basketball Championship will be played entirely within Indiana. The tournament known as “March Madness” was canceled last year due to the pandemic.

After everything else fans weathered throughout this wacky season, a few more days might finally deliver a national championship game worth the wait.