Some 300 firefighters responded, including some brought in by boat

Firefighters worked Monday to clear vegetation around a brush fire that has scorched about 800 acres near Lake Castaic in the Angeles National Forest.

The fire was 78 percent contained as of Monday around 8 p.m.

The fire's estimated time of full containment is about 6 p.m. Friday, but little to no growth was expected, according to the USFS.

A firefighter suffered a minor injury battling the blaze and was taken to an area hospital, said U.S. Service Forest spokesman Nathan Judy, adding that the upper northeastern portion of the lake has been closed.

The fire broke out Saturday afternoon in an area with difficult access near the Golden State (5) Freeway and Ridge Route Road, Los Angeles County Fire Department Capt. Ron Singleton told City News Service. It started on a bank of Castaic Lake, and the cause is under investigation.

Two outbuildings were destroyed, Judy said. There have been no evacuations and no road closures. 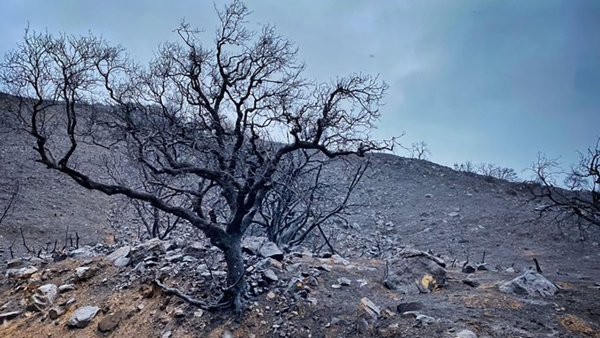 California's Coastal Areas to See Unusually High Tides. Here's When and Where

An increase in the number of dead and dying trees also can exacerbate the wildfire threat, CAL FIRE officials said. An estimated 102 million trees have died in California due to the state's five-year dry spell and bark beetle infestation.

The agency has been urging residents to take prevention steps now, such as maintaining 100 feet of defensible space around homes and other structures. Defensible space provides a natural buffer between buildings and grass, trees, bushes, shrubs and other vegetation that can burn.

NBC4's Willian Avila and Joe Studley contributed to this report.