NEW YORK – Wall Street will open for trading Monday at a two-month high as investors have grown more optimistic that the worst of the market's rout might be over. But, analysts contend, the real test is still to come.

There will be no shortage of economic data and potential corporate news as traders get back to work after the holidays. The real hope is that the market can build upon Friday's rally, when the Dow Jones industrial average snapped a four-week losing streak and closed above 9,000 for the first time since Nov. 5.

The past month has shown that the negative sentiment about things like corporate earnings and still-sluggish credit markets have already been factored into the market. Analysts say the next few weeks will determine if investors are comfortable enough to return to the market — with their fears of missing out on a rally outweighing concerns of a renewed downturn.

"There's now an estimated $8.9 trillion sitting on the sidelines in cash and money markets," said Stephen Leeb, president of New York-based Leeb Capital Management. "High cash levels and low stock prices historically go hand in hand. The current level as a percentage of the stock market's capitalization matches that at the market bottom in 1990." 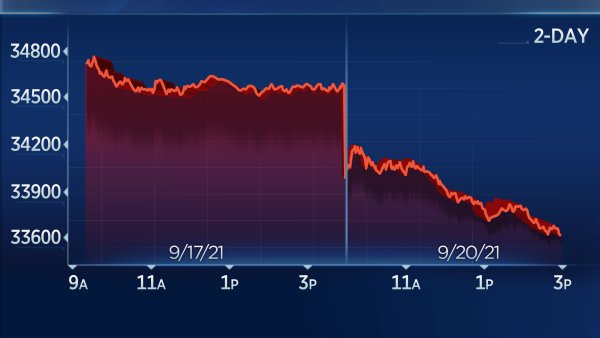 Dow Tumbles 760 Points, on Pace for Worst Day Since October 2020

He said this huge amount of liquidity "has yet to include the massive amount of money that will be created as a result of the Federal Reserve's recent unprecedented actions to stimulate the economy and financial system." That also could help bolster markets in the coming months.

Leeb and other analysts do not discount that the market may retreat and retest lows seen in November. The next few weeks will go a long way in assessing the market's resiliency, even in the face of abysmal economic news.

This week investors will be eyeing the Labor Department's December unemployment report, due out Friday. Employers are expected to have cut 475,000 jobs from their payrolls, according to analysts polled by Thomson Reuters. That would be below the 533,000 jobs in the previous month.

Meanwhile, the unemployment rate is expected to have risen to 7 percent from 6.7 percent in November. The government will also release its weekly jobless claims report on Thursday, which is again expected to show another increase.

Other reports on tap this week include November construction spending, auto sales reports, a survey on the services sector, November factory orders, and chain store sales.

The Federal Reserve on Wednesday will release the minutes from its Dec. 15-16 policy-making meeting. At that meeting, the central bank lowered the federal funds rate to between zero percent and 0.25 percent, and indicated rates would remain at that level for foreseeable future.

Also on Wednesday, the House Financial Services Committee meets to discuss how the next administration might make use of the remaining TARP funds. A House panel will also hold an economic recovery plan hearing with testimony from some of the nation's top economists.

The House Financial Services Committee on Monday will also hold a hearing on Bernard Madoff, the investor who lost potentially $50 billion in what is being called the biggest Ponzi scheme in U.S. history.

In corporate news, technology stocks may also be in the spotlight with two major events planned — Macworld and the Consumer Electronics Show.

Apple Inc. will unveil some of its new products at Macworld in San Francisco on Monday and Tuesday, where investors will be looking for any signs into the health of Chief Executive Steve Jobs. He is not expected to attend the event.

The Consumer Electronics Show will kick off in Las Vegas on Wednesday night. The trade show gives tech companies an opportunity to present new products, and that often can send their shares higher.