For those interested in retail therapy, tens of thousands of stores have reopened, including florist shops, just in time for Mother's Day.

Hiking to the Hollywood sign and hitting the links is being allowed Saturday as the California county hardest hit by the coronavirus cautiously reopened some sites to recreation-starved stay-at-homers.

Los Angeles County permitted the reopening of trails and golf courses but with social distancing restrictions. For those interested in retail therapy, there was even better news as Gov. Gavin Newsom on Friday allowed tens of thousands of stores to reopen, including florist shops, just in time for Mother's Day.

The city of Los Angeles announced it also was reopening some public spaces, including sprawling Griffith Park, which includes popular paths to the Hollywood sign.

But mounted police and park rangers would be keeping hikers to small, distant groups wearing face coverings. Mayor Eric Garcetti urged "good judgment" and said the city would rely on education and encouragement rather than heavy-handed enforcement.

It was "not our vision to make this like a junior high school dance with people standing too close to each other," he said.

County beaches could reopen next week with restrictions designed to keep people from thronging the shore and possibly spreading COVID-19.

"We don’t want a stampede to the beaches," Nicole Mooradian, spokeswoman for the county Department of Beaches and Harbors, told the Los Angeles Times. "Right now we’re planning for Wednesday."

Los Angeles County, the state’s largest with 10 million residents, has more than half California’s roughly 2,700 virus deaths and has seen dozens of new deaths daily. Public Health Director Barbara Ferrer acknowledged the risk that easing restrictions could lead to a new spike in infections.

"There is a lot at stake," Ferrer said. "Reopening our county, even slowly, only works if we’re all really committed to being careful."

But pressure has been building to reopen the state, seven weeks after Newsom's stay-at-home order shut down nonessential businesses and told 40 million residents to stay mainly in their homes.

More than 4 million people have filed for unemployment benefits. The California Department of Finance is projecting an unemployment rate of 18%, or 46% higher than the peak of the Great Recession a decade ago.

On Friday, Newsom eased the order and said roughly 70% of the state's businesses can open with restrictions.

Weekend shoppers can visit bookstores, as well as stores for jewelry, toys, clothing, shoes, home supplies and furnishing, sporting goods, antiques and music. People can’t browse but must pick up purchases curbside. Car dealerships also got the nod, with some showroom restrictions.

While San Francisco and six Bay Area counties have said they won’t ease their own retail restrictions for another week or longer, nearly two dozen counties — many of them small, rural populations with few coronavirus cases — want to move faster than called for under Newsom’s four-phase reopening plan.

The governor said the state will allow that under strict criteria based on the number of cases, deaths and tests.

But the state also sent a stern warning to three Northern California counties that have been defying his orders. Leaders in Yuba, Sutter and Modoc counties have allowed businesses to reopen that are outside the scope of Newsom’s plan, including dine-in restaurants, hair and nail salons and shopping malls.

On Friday, California’s Office of Emergency Services told Yuba, Sutter and Modoc they could lose federal disaster aid if they continued exceeding the governor’s order.

The state Board of Barbering and Cosmetology, which issues permits for hair and nail services, similarly said it was warning violators they could lose licenses.

The Sutter County Board of Supervisors plans to vote Saturday on a proposal telling the state the public health officer for the two counties attests they meet state criteria for broader reopening.

California is now in stage two of Newsom's four-phase process. The governor on Friday did provide a glimmer of hope that phase three, which would allow reopening of such businesses as nail salons, isn’t far off. That phase would also allow for the reopening of churches, movie theaters and some hospitality services.

"It’s not six months away, it’s not even three months away. It may not even be more than a month away," Newsom said. "We just want to make sure that we have a protocol in place to secure customer safety, employer safety, and allow the businesses to thrive in a way that is sustainable." 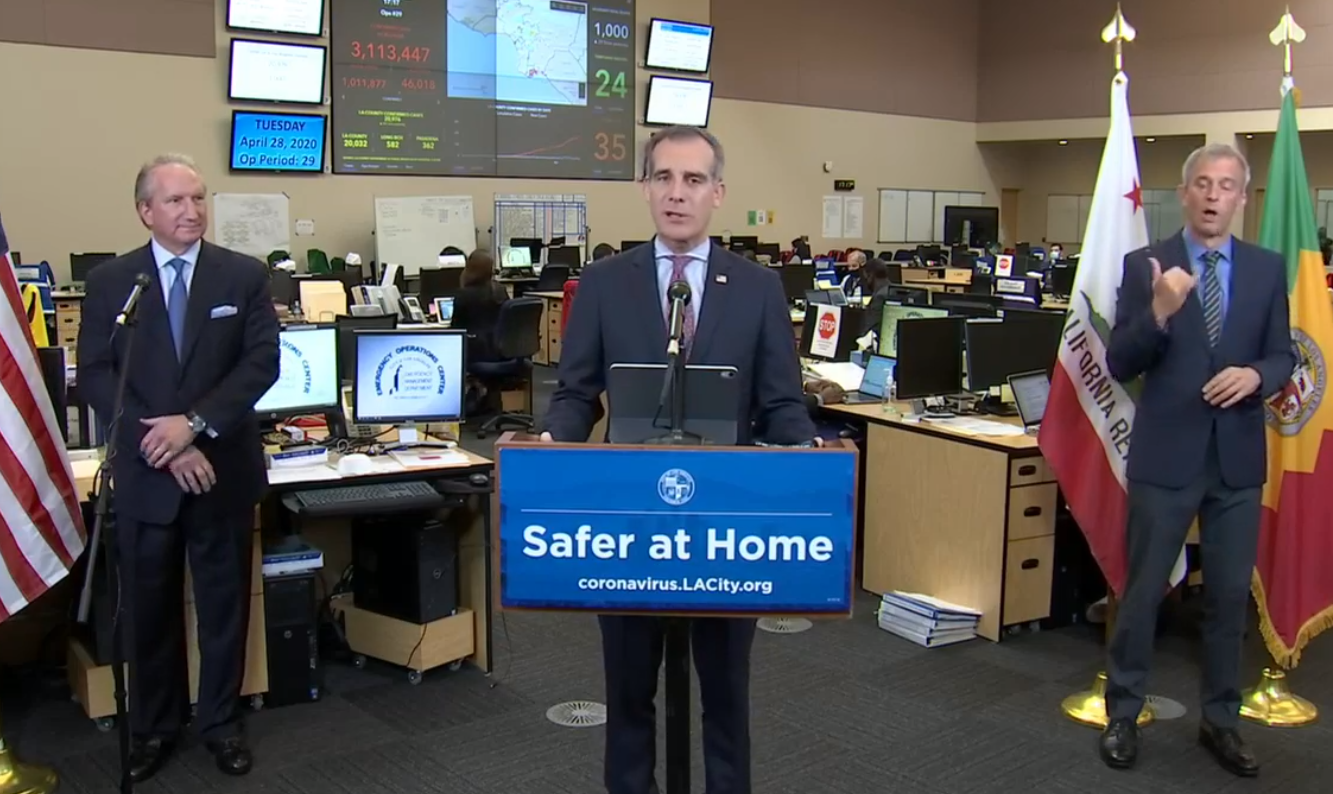 Department Stores Had an Insane Week. Here's Everything That Happened

To move more quickly to reopen restaurants, malls, office buildings, childcare facilities and services such as car washes and pet grooming, counties must demonstrate they’ve had zero deaths and just one case per 10,000 residents during a two-week stretch, as well as robust testing and tracing and an ability to house up to 15% of the homeless.

"This pandemic is going to be a long dance between safety and rapidly changing conditions on the ground," Knaus said.

Los Angeles County has no chance of being fast-tracked, said Ferrer, the public health director. A Los Angeles Times analysis found that 95% of Californians live in counties that don’t meet the standards.

"This may apply much more easily for those very small counties that already have in fact seen a significant decrease or may have had no deaths at all to date," she said. "But for the larger counties, we will only be able to apply for a variance under these conditions when the pandemic is over."