A status conference is set for Monday morning in Los Angeles federal court to discuss the matter further.

Prosecutors and defense attorneys in the public corruption case involving ex-Los Angeles City Councilman José Huizar will ask a federal judge Monday to put off the trial for one year, but the judge has indicated he wants to start the proceedings earlier.

Citing concerns over issues caused by the COVID-19 pandemic, attorney schedules and voluminous evidentiary materials, lawyers filed a stipulated agreement to set the Huizar trial for May 24, 2022. However, in a status conference conducted via Zoom last month, U.S. District Judge John F. Walter indicated that the proposed date seems unnecessarily far away.

A status conference is set for Monday morning in Los Angeles federal court to discuss the matter further. 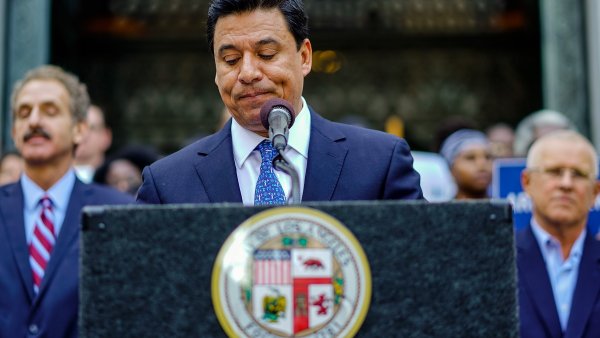 Huizar filed a motion to compel production of two categories of grand jury records: information regarding any modifications to prosecutors' pre-coronavirus grand-jury procedures for the case -- such as grand jurors appearing by video, witnesses wearing masks or testifying remotely -- and legal instructions that the U.S. Attorney's Office used to inform the grand jury regarding the counts charged in the indictment.

In an April order denying the motion, Walter wrote that Huizar failed to demonstrate any particular need for details about potential modifications to grand jury procedures in his case. Further, the judge determined that the former councilman failed to show that any legal instructions used by federal prosecutors before the grand jury “may have been misleading, let alone flagrantly misleading.”

Huizar, the central figure in a six-year probe of suspected corruption in City Hall politics, is charged in a 41-count racketeering indictment alleging that he accepted $1.5 million in bribes from developers in exchange for his support of downtown building projects.

The federal probe also ensnared political operatives, lobbyists and the former general manager of the Los Angeles Department of Building and Safety.

Huizar, who represented downtown L.A. and was the chairman of the Planning and Land Use Management Committee, has pleaded not guilty to the charges against him.

Prosecutors wrote that the government has produced almost 2 million pages of written reports, emails, third-party documents, and more than 93,000 files of intercepted wire sessions, including audio and data files.

In addition, discovery materials include reports for more than a dozen digital devices, over 260 hours of audio recordings in addition to intercepted wire sessions, data for more than two dozen phones, GPS phone tracker data for multiple devices, and dozens of pleadings for wiretap applications, search warrants, cell site and GPS warrants, and other information.

Huizar is expected to face trial in downtown Los Angeles with several associates, including Raymond Chan, who was general manager of the Department of Building and Safety and, more recently, was the city's deputy mayor of economic development.