Two half-brothers from Montebello were sentenced Friday to potential life prison terms for a crime spree that included the 2015 killing of a Downey police officer who was shot in the face while sitting in his BMW in a parking lot near the police station.

Co-defendant Jeremy Anthony Alvarez, 26, was sentenced to 30 years to life in state prison for his guilty plea to second-degree murder and attempted robbery stemming from Galvez's shooting death.

The pair additionally pleaded guilty to an attempted murder in Montebello on October 18, 2015, along with the takeover robbery of two victims at a Bellflower cellphone store and a street robbery in Paramount shortly before Galvez's murder.

They also admitted gun and gang allegations, according to the Los Angeles County District Attorney's Office. 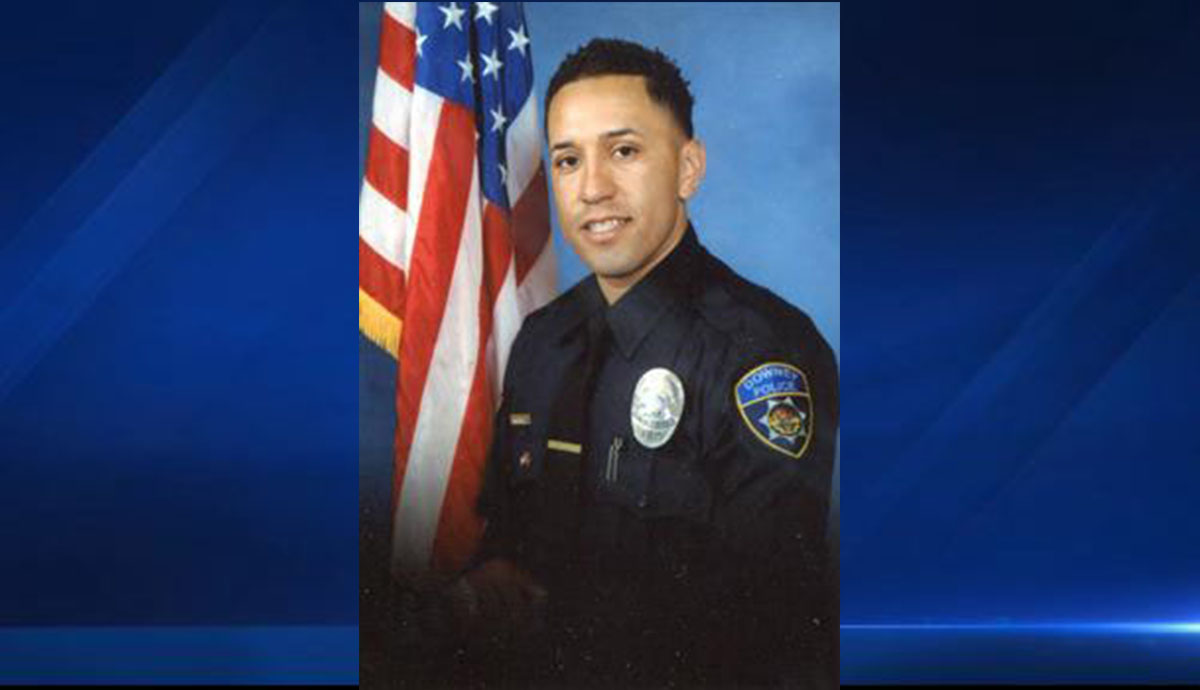 Galvez, a former U.S. Marine and five-year veteran of the Downey Police Department, was dressed in plain clothes after working with the department's K-9 team when he was shot as he sat in his personal car in the police station parking lot.

Alvarez, the getaway driver, was arrested after a wild pursuit that was caught on dash-camera video recorded from the patrol car of a Downey police officer who heard the gunshot in the area of the parking lot and began chasing the Nissan Altima.

Knott and a 16-year-old boy were arrested the next morning. The teenager subsequently admitted a Juvenile Court petition charging him with Galvez's murder and attempted robbery and a robbery count involving another man the same day, and faces confinement in a state juvenile facility until he is 25.

Investigators recovered a handgun that was thrown out of the vehicle. DNA testing and fingerprint analysis linked Knott to the weapon, according to stipulations agreed to by the prosecution and the defense at a hearing in 2017.

Prosecutors say ballistics tests determined that the gun had been used to kill the 29-year-old officer, who had served two tours of duty -- one in Iraq and one in Afghanistan -- prior to becoming a police officer.

In emotional testimony in September 2017, Downey police Lt. Brian Baker said he walked out to the parking lot to investigate what might have happened after speaking on the phone with Officer Justin Prentice, who had chased the light-colored Altima to Montebello.

The lieutenant said he did not initially recognize Galvez or his car, and only realized that the victim was his colleague after looking through the vehicle's windshield.

Baker said the BMW engine was running and he noticed a bullet hole in the driver's side window, then directed a sergeant to break the passenger window of the locked car. They determined that the officer was dead, and a check of the vehicle's registration confirmed the car belonged to Galvez, Baker said.

Los Angeles County sheriff's Sgt. Richard Biddle testified that the suspects' attempt to rob Galvan “wasn't completed. They didn't get anything inside the car. The gun went off and they fled.”

When he was shown a still photo from surveillance camera footage in the parking lot, the teenager subsequently admitted that he and Knott had approached the BMW -- one from each side -- while Alvarez remained inside the Nissan Altima, Biddle testified.

The teenager subsequently was tape-recorded in jailhouse conversations in which he admitted being involved in the crime and saying that the three formulated a plan to rob Galvez, according to the sheriff's sergeant. The teenager said he and Knott wore masks made of pieces of cloth over their faces.

Under cross-examination, Biddle said the teenager claimed the gun wielded by Knott had gone off accidentally.