Firefighters in rescue helicopters hoisted more than a dozen people to safety Wednesday from the rooftop of a West Los Angeles high-rise building where thick smoke billowed from burning sixth-floor residences and at least one person scaled the side of the building to escape the flames.

LAFD Chief Ralph Terrazas initially told NBC4 one person was in custody, but the department later said no one was detained. Los Angeles police confirmed at a midday news conference that no one was in custody.

There was a similar scene in 2013 at a high rise in Wilshire, but even after that fire there were no sprinklers installed. Eric Leonard reports for the NBC4 News on Wednesday, Jan. 29, 2020.

Firefighters initially received reports of people jumping from windows and balconies of the 25-story residential building in the 11000 block of Wilshire Boulevard in the Brentwood area. They later confirmed no one jumped from the building, but video from a witness showed at least one person scaling the side of the Barrington Plaza complex as thick smoke poured from nearby windows.

Firefighters convinced that person not to jump, then rescued him from the ledge.

In all, 11 people were injured, including a 3-month-old child. One person was in grave condition, according to the fire department. The man who was rescued from the ledge was in critical condition. Most of the other injuries involved smoke inhalation.

Gavin, who happened to be in the pool at the time a fire began in his high-rise apartment building, described going door-to-door to help evacuate his neighbors. . Angie Crouch reports for the NBC4 News at 10 a.m. on Wednesday Jan. 29, 2020.

Two firefighters were also injured with minor burns battling the fire and were treated at a local hospital.

There were no reports of fatalities.

One resident said he was at the tower's pool when he noticed smoke coming from a residence. He ran to the lobby to inform the front desk, then accompanied a maintenance worker to the unit from where the fire apparently began.

"It was just a wall of black smoke," said resident Gavin Strauss, still wearing a towel and barefoot as he spoke with NBC4 on a sidewalk outside the building.

Firefighters placed an inflatable rescue cushion below the burning residences, but several people went to the rooftop of the building. LAFD and sheriff's department helicopters hovered above the rooftop in windy conditions, hoisting 15 people and at least two dogs to safety.

"We have rarely done rooftop evacuations," said Terrazas. "It's a valuable resource for our helicopters. They worked effectively. Very successful."

A LAFD helicopter crew hoisted people to safety after they went to the top of a burning high-rise building in West LA.

Some of the rescued victims were airlifted directly to the nearby VA Medical Center.

"I saw helicopters trying to save some lives on the rooftop," said witness Ken Sax. "It was a pretty wild, chaotic environment.

Details about how the fire, which began at about 8:30 a.m., started were not immediately available. After most of the flames were knocked down, the smoke cleared to reveal that the exterior of several floors on at least two sides of the building were charred.

Dalia Kingsbury, who evacuated from her apartment on the 16th floor.

"We didn't know if the fire was going to come out of the door," she said. "We thought, 'It's going to explode."'

Kingsburg said she received calls and texts from friends and heard smoke alarms at about 8:45 a.m. She was still in her pajamas when she ran to the stairs with her roommate and golden retriever.

"I was shaking the whole time," Kingsburg said.

The roommates looked up and saw the man on the edge of the building just before he was rescued.

Cecile Mathieson, who lives on the 25th floor, was forced to flee down the stairwell.

“I’m pushing people out of the way praying, 'God let me live.' I didn’t know if I was going to live. There were so many people," she said.

The Los Angeles Fire Department evacuated residents on Wednesday morning after a fire broke out in a high-rise apartment building in the Brentwood neighborhood of Los Angeles.

The fire was about three blocks east of a building that burned earlier Wednesday in Brentwood. In that fire, remodeling was taking place on three lower floors. A tent supporting scaffolding caught fire and the flames moved quickly through the building. Fifty occupants were safely evacuated.

"As that was winding down, our firefighters recognized that this was taking place," said LAFD Deputy Chief Armando Hogan.

Investigators will attempt to determine whether there's a connection between the two fires, police said.

"We don't know if we have an arson or an accidental fire," said LAPD Deputy Chief Justin Eisenberg.

In 2013, a fire at the same building injured five people. The blaze began in a unit on the 11th floor and sent thick smoke into the building's upper floors. An estimated 100 to 150 people were unable to return to their homes, and some were receiving assistance from the American Red Cross.

Fire sprinklers were not required when the building was constructed in the early 1960s. 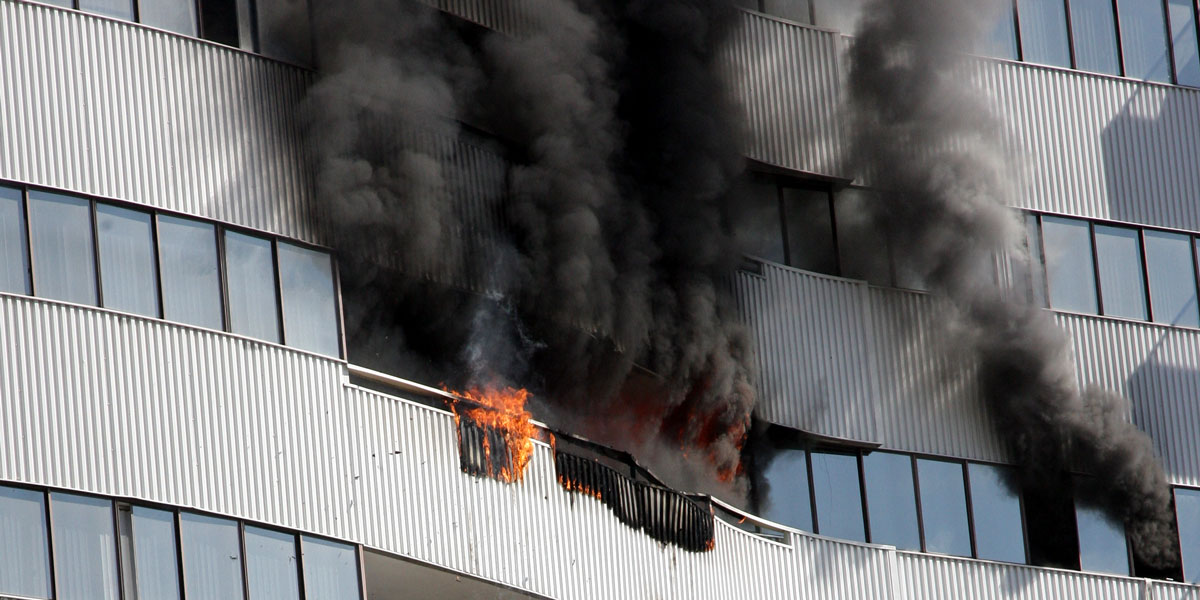 A shelter had been set up at the Westwood Recreation Center at 1350 S. Sepulveda Blvd., and the apartment building's owner has reserved a block of hotels at area hotels, authorities said at a news conference.