What began as a peaceful protest over the death of George Floyd took a turn when protesters turned destructive. More protests are planned for Sunday.

Los Angeles witnessed another day of protests Sunday, as neighborhoods in the downtown area, Fairfax District and elsewhere cleaned up following a destructive night of fires and vandalism.

Members of the California National Guard were deployed onto the streets overnight, allowing police officers and deputies to make arrest looters and vandals. The Guard members will remain present Sunday when demonstrations and vigils were planned in throughout the Los Angeles area in Santa Monica, Compton, Pasadena, Long Beach and other locations.

The first peaceful demonstration began at noon in Santa Monica. Ocean Avenue from Montana to Pico was blocked by demonstrators, police advised traffic to avoid the area. Though the main protest appeared to remain peaceful, groups of looters only blocks away were breaking store windows and stealing items.

Due to the looting, the city of Santa Monica decided to implement starting a curfew at 4 p.m. that would last until Sunday morning. At 4 p.m., police named the protest an unlawful assembly and guided the peaceful protesters away from Ocean Avenue, where they had gathered.

A citywide curfew in Los Angeles expired at 5:30 a.m. Sunday morning, but it was scheduled to go back into effect from 8 p.m. Sunday to 5:30 a.m. Monday. Meanwhile, LA County announced a curfew will be in effect from 6 p.m. Sunday until 6 a.m. Monday morning, according to Supervisor Janice Hahn. Residents were asked to stay at home and only go out to seek medical care or go to an essential job.

Police continued to arrest people who were looting stores or were on the streets in violation of a city curfew early Sunday morning, following a fourth night of protests tied to the in-custody death of George Floyd in Minneapolis. Most of Friday night's disturbances were in the downtown LA area, and the Fairfax District became a flashpoint Saturday when a group of people clashed with police after a peaceful protest march from nearby Pan Pacific Park.

Los Angeles' Fairfax District became the epicenter of violence and looting in Los Angeles. Meghan Reyes reported for Today in LA Weekend on Saturday May 31, 2020.

The flare-up prompted Gov. Gavin Newsom to declare a state of emergency and deploy up to 1,000 National Guard troops after crowds poured into the Fairfax District, downtown and onto Beverly Boulevard, with many taking over the intersection of Third Street and Fairfax Avenue, shutting down traffic.

Board of Supervisors Chair Kathryn Barger announced Sunday that she has proclaimed a state of emergency as well, which will facilitate interagency response coordination and mutual aid, accelerate the procurement of vital supplies, and enable future state and federal reimbursement of costs incurred by the county.

"This emergency comes as we are in the midst of battling another emergency caused by the COVID-19 pandemic. This taxes our resources, but not our resolve," Barger said.

At the intersection of Third and Edinburgh Avenue, several police cars were vandalized and rubber bullets were fired to try to control the crowd. Police tried to hold the line against further advancement, and could be seen engaging in scuffles with some protesters, including some who used their clubs.

The windows at scores of stores were broken, with people moving in and clearing shelves of pricey merchandise

The Fairfax District gathering followed a noon demonstration at Pan Pacific Park, at 7600 Beverly Blvd. A handful of similar demonstrations were held in other parts of the city, including a 3 p.m. event in Boyle Heights.

At a hastily scheduled news conference to address what the city is doing to keep the public safe, Mayor Eric Garcetti announced a curfew for the downtown area and initially said he would not ask for National Guard troops. Shortly afterward, he extended curfew, set for 8 p.m. Saturday to 5:30 a.m., to the entire city and asked Newsom to send 500 members of the National Guard to help police.

Looters broke windows and looted an Adidas store on Melrose Avenue in Los Angeles on Saturday.

Looting was rampant downtown, in the Fairfax District and Beverly Hills with targets including a high-end consignment store on Fairfax Avenue, an eyeglass store on Melrose Avenue, a Target store in the Beverly Grove shopping center and a Walgreens store at Fourth and Hill streets.

Later in the evening looters cleaned out an Apple store on Melrose Avenue and reportedly took merchandise from a MedMen cannabis dispensary in West Hollywood.

The mayor joined many other city officials Saturday in sympathizing with the demonstrators expressing frustration about repeated acts of police brutality targeting black men while also appealing for calm. “With liberty comes responsibility to be able to peacefully protest,” Garcetti said.

“For that one or two percent of the protesters who think that (violence) is the way to make a statement, do not do a disservice to the memory of George Floyd (and) the folks who have died at the hands of the brutality that we all stand against,” Garcetti said.

Around 398 arrests were made Saturday related to the protests, according to the Los Angeles Police Department, with charges including burglary, looting, vandalism, failure to disperse, felon in possession of a gun and numerous curfew violations.

Five LAPD officers were injured during Saturday's unrest, with officers hospitalized. Police said the injuries ranged from contusions and broken bones to a fractured skull.

LAPD Chief Michel Moore said during a Saturday afternoon news conference that an officer was struck by a brick and had to undergo surgery after suffering a fractured skull. The police chief said he believed the officer would survive. Unrest Overshadows Peaceful US Protests for Another Night 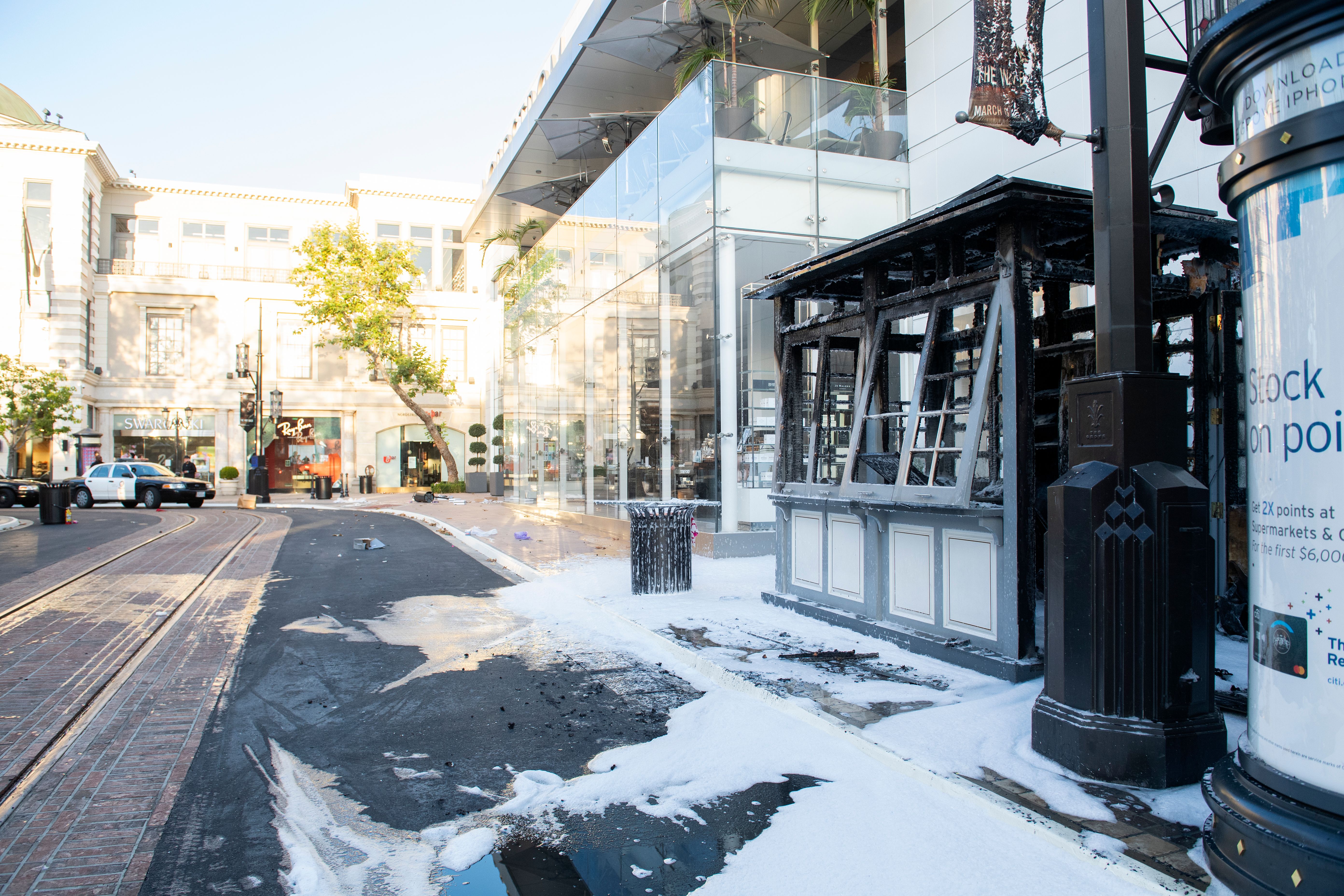 Rev. Najuma Smith Pollard, program manager for the USC Cecil Murray Center for Community Engagement added, “It is the right thing to stand up and speak out. We don't need more mayhem. It doesn't work.”

Earlier Saturday, Moore said that all restrictions had been lifted in the downtown area, as he also appealed for calm.

“While more protests are slated for various locations throughout the city today, we remain hopeful those demonstrations will be peaceful,” Moore said in a series of tweets sent shortly before noon Saturday.

“I am asking for all of Los Angeles to come together and find the ability to peacefully express individual and collective grievances while also maintaining the safety of all of Angelenos,” he said, adding that the LAPD would deploy additional resources to maintain order.

Final arrest numbers for Saturday will not be available until later Sunday, police officials said. But Moore said 533 people were arrested overnight Friday on charges including burglary, looting, probation violations, battery on a police officer, attempted murder and failure to disperse. All but 18 have been released.

Saturday's events began at noon, as Black Lives Matter Los Angeles held a rally at Pan Pacific Park. Another protest, hosted by the Coalition for Community Control Over the Police, happened at 1 p.m. outside LAPD's Southeast Station at 145 W 108th St. and included a march to the Los Angeles County Sheriff's office at 1310 W. Imperial Highway.

At 3 p.m., a demonstration was scheduled at Mariachi Plaza in Boyle Heights, 1831 E. First St. to demand the release of all prisoners, as well as an end to police terror and “crimes against Latinos and blacks.”

People took to the streets Friday for the third consecutive night to demand justice for Floyd, who died on Memorial Day after being handcuffed and pinned to the ground by a white Minneapolis Police Department officer, Derek Chauvin, who pressed his knee on the 46-year-old man's neck for more than eight minutes while three other officers looked on.

The LAPD was placed on tactical alert at 2:20 p.m. Friday as a precaution ahead of the protests, according to Officer Tony Im.

As Los Angeles firefighters arrived to extinguish the flames, someone in the crowd grabbed a department fire hose and tossed it into the fire burning in the intersection.

At least one LAPD cruiser was tagged with graffiti.

After four nights of disturbances, Newsom issued the emergency declaration for all of Los Angeles County.

In his accompanying statement, Newsom warned outsiders who might come to California to exploit its “pain to sow chaos and destruction,” and urged a renewed focus on the systemic issues at the core of the unrest.

“Our state and nation must build from this moment united and more resolved than ever to address racism and its root causes.”

Protests were also planned outside LA County in both Riverside and Orange Counties.